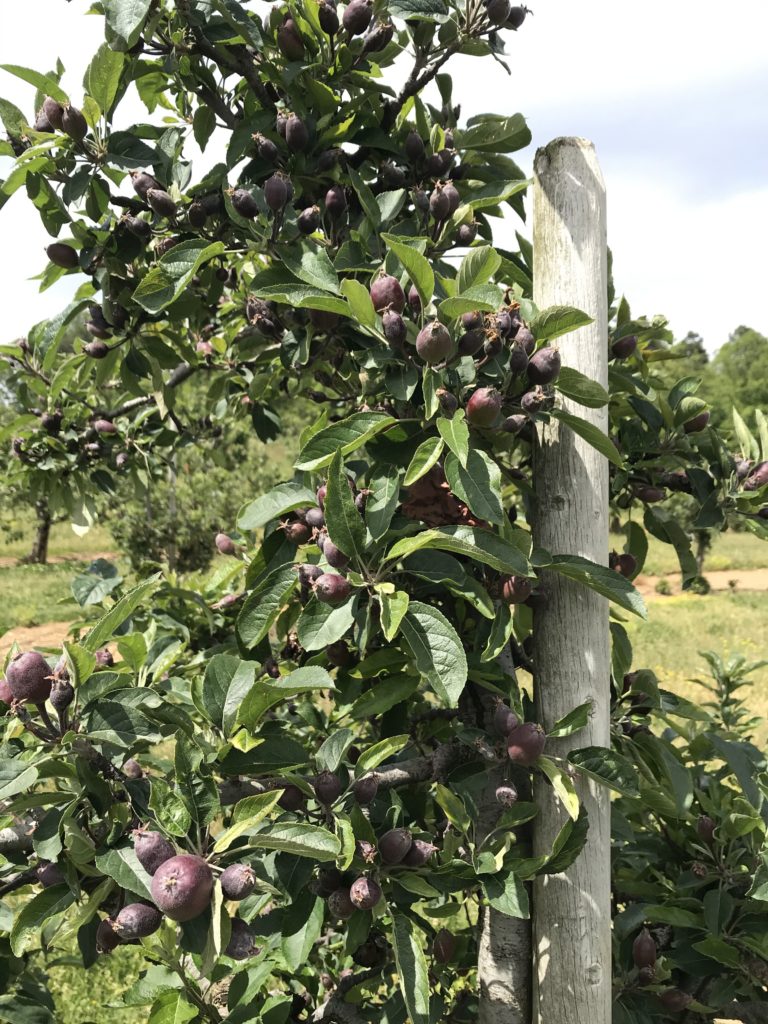 To complicate matters, most sites in the southeast observed several frost/freeze events. There is widespread variation in fruit set due to these cold events. Some blocks are exhibiting sub-lethal cold injury, such as frost rings, russet, and seed damage. Blocks that have evidence of cold injury are generally more sensitive to chemical thinner applications – rates may need to be reduced to avoid over-thinning. Please check for seed/fruit damage before making additional thinning applications.

Another challenging factor is that cool weather has delayed the visible response of previous chemical thinner applications. In orchards that received post-bloom thinner applications 2 weeks ago, very few fruit have fallen from the canopy. With minor agitation, some abscising fruit can be detached from the tree. In some cases however, there are some fruit that appear weak/stunted that seem to be firmly attached and have healthy seeds. It is very challenging to determine if these fruit are abscising or persisting without detailed monitoring of fruit growth and development. 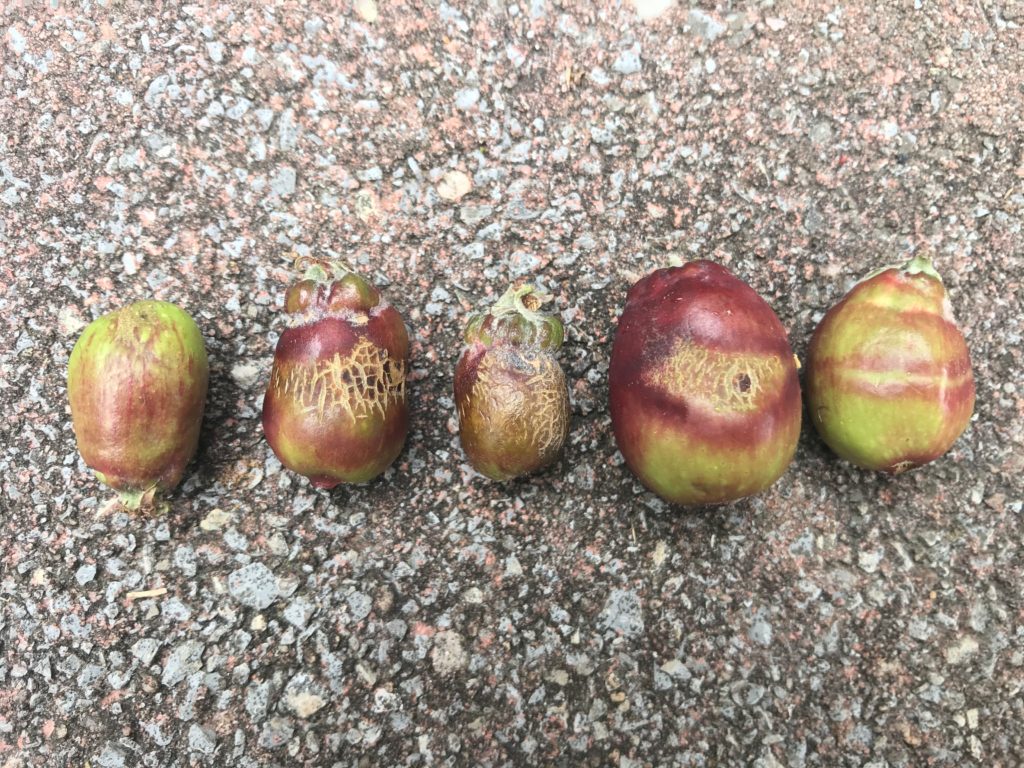 With several frost/freeze events in 2020, some fruit/blocks are exhibiting sub lethal cold injury, such as frost rings, russet, and seed damage. 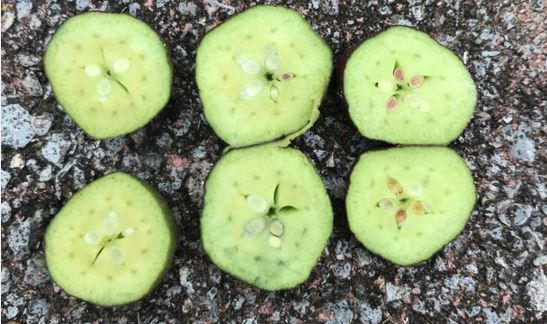 Seed damage (note discolored/aborted seeds in fruit at center and right) has been observed in several orchards. Be sure to check for seed/fruit damage before making additional chemical thinner applications.

Per the forecast, one of the “better” opportunities for post bloom thinner activity in 2020 will occur over the next few days. While ‘Rome’ is in the post bloom thinning window (8-14 mm diameter), most varieties are at a stage of development (>18 mm) that key post bloom chemical thinners (6-BA and NAA) have poor/limited activity. With large fruit (>18 mm) options for chemical thinning become more limited and volatile. If more than a minor reduction of crop load is needed, then thinning programs including ethephon are generally required. Ethephon has the reputation of being an erratic thinner – some of my colleagues from more northern growing regions refer to this as the “elephant gun” of chemical thinners. For better or worse, many growers will need to rely on this tool to re-thin significant acreage in the southeast.

A few comments about thinning with ethephon:

See guidelines from the 2020 Integrated Orchard Management Guide for Commercial Apples in the Southeast (below). While developed for another region, another nice resource for rescue thinning was developed by researchers at University of Massachusetts and Rutgers University. 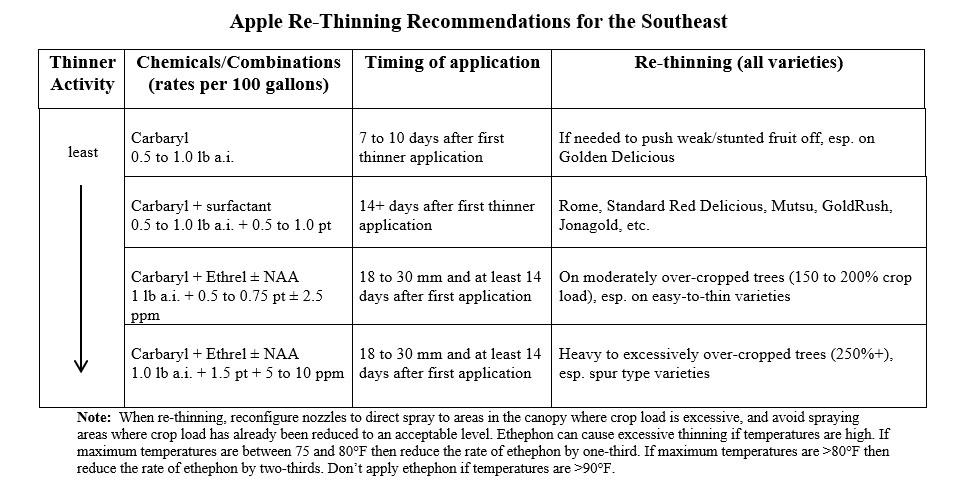 Output from the Carbon Balance Model for four sites in western NC (Apple Wedge, Flat Rock, Sugarloaf, and Morganton) and two sites in North Georgia (Blue Ridge and Ellijay) is below.

If you have access to NEWA, I highly recommend calculating the carbon balance for your own site. Predicted weather data is used in these estimates and the forecast can change throughout the course of a day. If you’d like to run the model on your own, the link at the NEWA site is on the drop-down menu under “Crop Management”. Choose a site nearest your orchard location and enter your Green Tip and Full Bloom date. If using the 2019 version of the model, select the % of flowering spurs that is most appropriate for the block(s) you plan to thin. Then select the green “Calculate” button.

It is very likely that if you run the model on your own, you will observe different and more accurate output. Potential reasons for this deviation in output includes:

1) Use of different model versions. I am reporting data from the 2019 version of the model and selected 50-75% flowering spurs.

3) Model output is based on forecast data, so the output will change as the forecast changes (a key incentive to run this on your own, if possible). 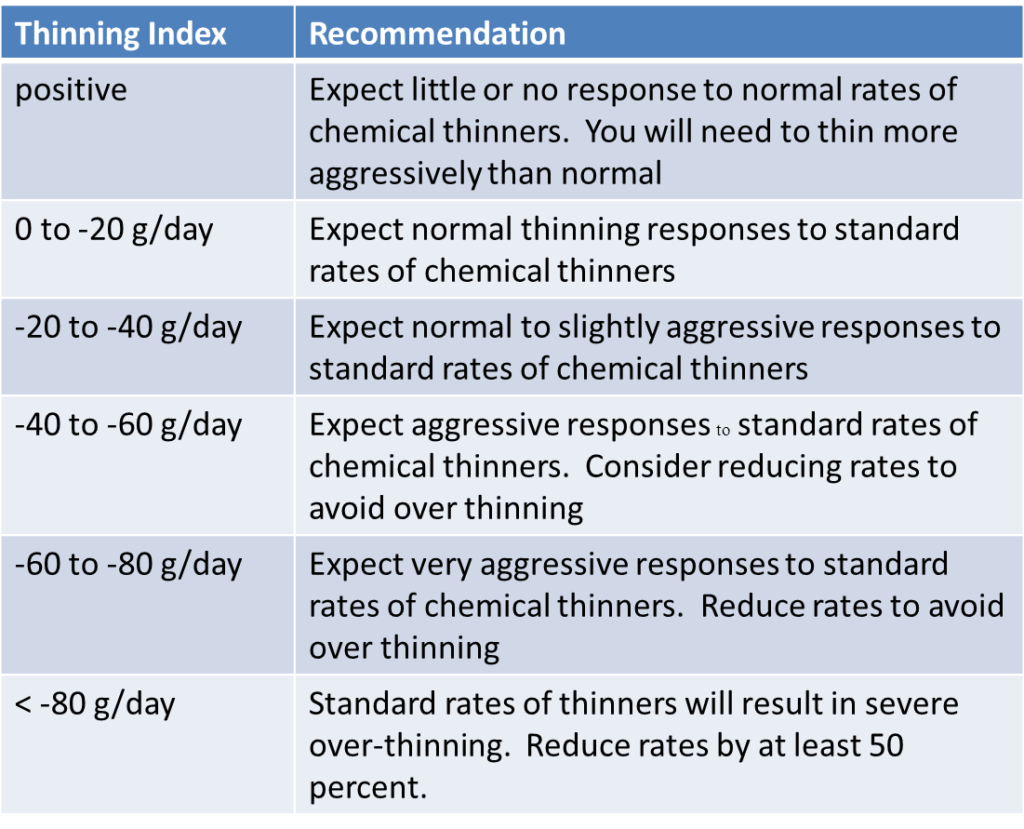 Notes on Using Output from the Carbon Balance Model