Insect trapping is relatively simple, but the details must be handled carefully in order to perform accurate and effective Integrated Pest Management (IPM). The insect counts, action thresholds, and degree-day models used to generate the orchard insect pest report for western North Carolina rely on the following trap styles, lures, and techniques. There are other feasible traps and lures available, and the system described below is presented only as an example of what has worked for us for many years. More information about IPM for apple pests is presented in the Integrated Orchard Management Guide for Commercial Apples in the Southeast. 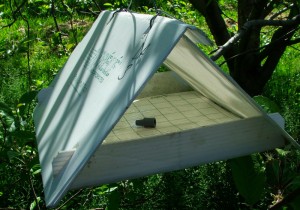 Codling moths are trapped in large Delta-style traps with replaceable interior sticky liners and rubber Codling Moth L2 pheromone lures. The rigid Delta-shaped traps are sold flat and need to be unfolded prior to hanging. Once unfolded, insert one fresh sticky liner and place a codling moth lure on its side in the middle of the liner – do not put more than one lure per trap, and do not touch the lure with your fingers. (When you begin assembling traps for other species, you do not want to them to be contaminated with codling moth pheromone. Ideally, use forceps or tweezers to handle lures, and wipe them off before handling lures for a different species). 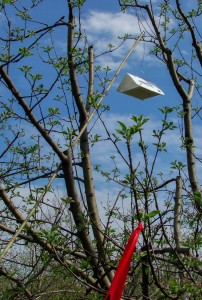 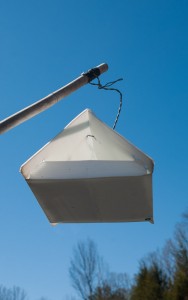 assembled, codling moth traps should be hung in the interior of the orchard at a density of approximately 1 trap per 10 acres, beginning when trees are in the tight cluster stage of bud development (see Apple Growth Stages). Since codling moth activity occurs mainly in the upper parts of trees, it is very important that the traps be placed in the top one-third of the canopy. On anything but the smallest dwarf high-density trees, this will require attaching the trap to a bamboo pole (6 to 8 feet is a good length) for easy checking throughout the season. Drill a hole in the bamboo, reinforce with duct tape, and insert the trap wire, bending it at a 90° angle so the trap/pole combination can be hung easily from a horizontal limb. It does not matter if the trap is not perfectly level, but it needs to be secure enough that it won’t blow away with the first wind gust.

Early in the season, traps should be checked every couple of days. Once you have caught at least one moth on each of two consecutive checks, you can establish biofix and begin accumulating degree days according to the codling moth degree-day model (explained in the Orchard Management Guide under “IPM Practices for Selected Pests.”) After biofix is established, traps need to be checked only weekly. 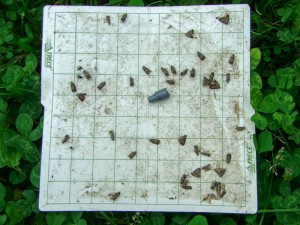 If there are only a few insects in the traps, they can be scraped off with a knife and the same sticky liner can continue to be used. If the liners become covered in insects or other debris to the point that scraping them clean also removes the sticky coating, they should be replaced. As a very rough guide, count on using about 10 liners per trap during the course of the season. When populations are peaking or there is a lot of debris in the orchard (such as during petal fall), liners may need to be replaced weekly, but during periods of less activity, one liner may last several weeks. The Codling Moth L2 lure itself is rated with an 8- to 12-week field life. In the mountain counties, we typically assume the longer life and replace the lures once at mid-season (usually early to mid-July). In hotter areas of the piedmont, it is safer to assume the 8-week field life and change lures twice per season. The Delta traps and bamboo poles are relatively durable and will last several seasons if stored in a protected area over the winter. 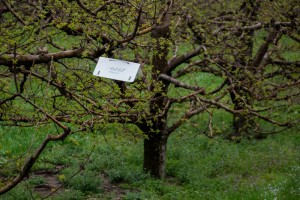 Except for a few minor differences, trapping for oriental fruit moth is essentially the same as trapping for codling moth. An Oriental Fruit Moth L2 lure is used instead of a codling moth lure, and traps should be placed in the orchard earlier, during the green tip stage. Also, it is not necessary to put OFM traps in the top third of the canopy, so hang them approximately 6 feet from the ground. 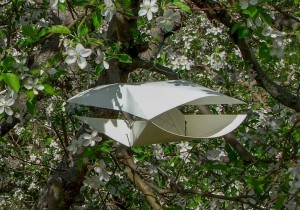 For the three common leafroller species (tufted apple bud moth, redbanded leafroller, obliquebanded leafroller) and lesser appleworm, it is cheaper to use “wing traps” instead of Delta traps. These traps consist of a plastic top, a sticky cardboard bottom, and a wire frame holding the two together. The sticky liners are less convenient to change than those of Delta traps, but the leafrollers and LAW are generally not as economically significant as CM or OFM, and most orchards require only 1 or 2 traps for each species (if you cannot trap for all species, trap for TABM, which is historically the most significant). Pheromone lures for each species are placed in the center of the sticky bottoms – again, use only one lure per trap, and be careful not to contaminate one species’ trap with the pheromone of another species. These traps should be set up at the same time as codling moth traps (tight cluster), should be hung approximately 6 feet from the ground, and should be kept at least 20 feet apart from each other. Like codling moth and oriental fruit moth traps, they should be positioned inside the orchard, not along the edges. 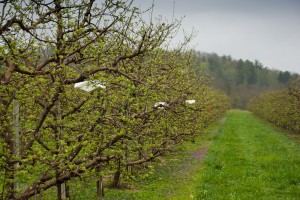 Lures for these species have shorter field lives than the L2 lures, with a manufacturer’s rating of 4 to 6 weeks. In spring and fall, when many days have cool temperatures, we replace lures every 6 weeks, but during long periods of summer heat they are replaced every 4 weeks. Replace sticky bottoms as necessary and use the tufted apple bud moth degree-day model (explained in the Orchard Management Guide under “IPM Practices for Selected Pests.”) to monitor TABM populations. There are no models for the other three species, but traps can indicate whether they are present in large numbers. In western NC, they are generally not significant either because of naturally low populations or because they are controlled by pesticides applied for other lepidopterous insects. 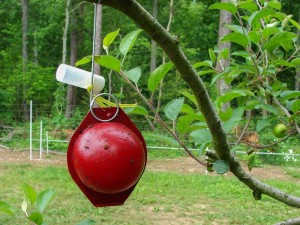 Apple maggots are trapped with disposable “red ball” traps covered with a sticky coating applied with a spray can. Traps are suspended from branches by a wire, and a semipermeable container of fruit essence is attached as bait. Overwintering flies may emerge anytime from late May to August, so hang traps in mid-May and keep traps maintained until fruit is harvested. Place 3 traps evenly spaced along exterior rows adjacent to abandoned orchards, woods, or other suspected sources of flies. Traps should be hung at eye level in trees with fruit, but any fruit within an 18-inch radius of the trap should be removed. Spray an even layer of sticky coating over the entire trap. The fruit essence vial should be removed from its plastic bag prior to hanging, but do NOT remove the cap from the vial – the scent is intended to permeate the closed vial slowly over a period of weeks.

Check traps weekly, and remove any apple maggot flies with a knife. Reapply sticky coating each time the trap is checked; it will become covered in fruit flies, gnats, and other debris, but does not need to be replaced until the layers of debris completely obscure the trap and reduce its effectiveness. The fruit essence vial should be replaced when the liquid is gone. Traps and vials usually need replacing once or twice per season. 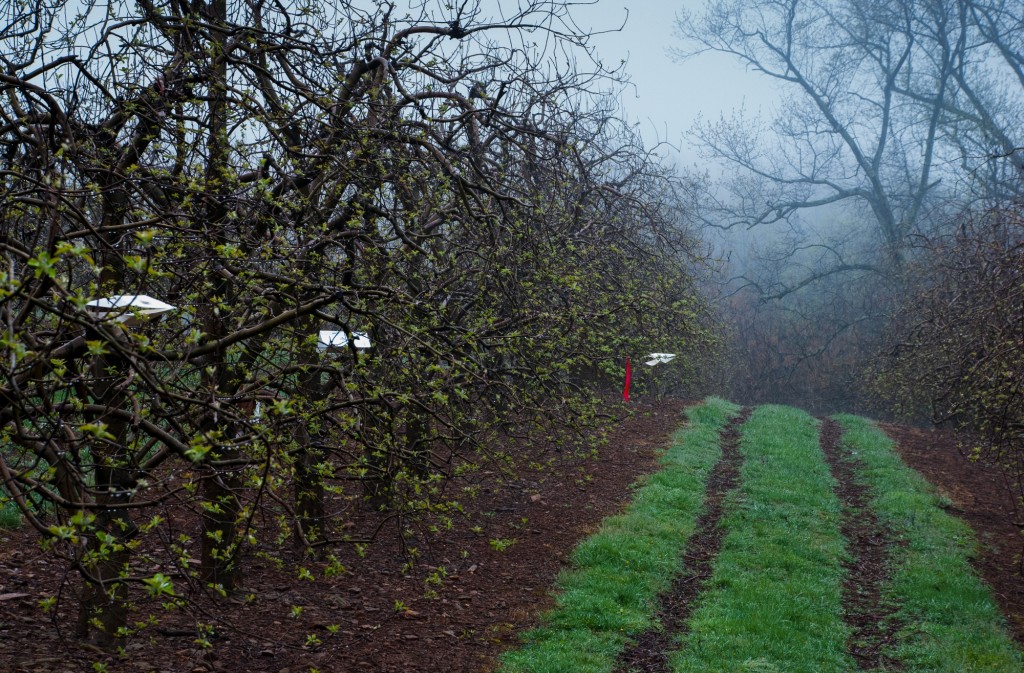