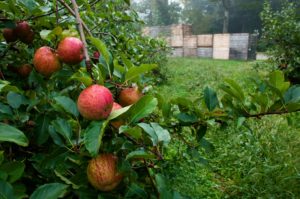 There are nearly 40 species of arthropods (insects and mites) known to attack apples in the Southeast, but only a small fraction are common in commercial orchards. Effective Integrated Pest Management (IPM) depends upon knowing when these pests are present in numbers large enough to warrant control, and applying the correct pesticide to 1) achieve control of the target pest, and 2) avoid killing natural enemies that provide biological control of key secondary pests.

The following is a summary of potential arthropod management actions needed in a typical southeastern growing season. (For more details on pesticide rates, relative effectiveness, and current recommendations, and for a more extensive listing of possible insect pests, check the “Pest and Orchard Management Program” in our Integrated Orchard Management Guide for Commercial Apples in the Southeast. For illustrated fact sheets of specific arthropod pests, click on the links within the text below, or see the full list at the bottom of the page.) 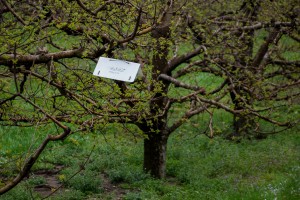 Early season insect control focuses on managing San Jose scale (SJS) and reducing the number of European red mite (ERM) and rosy apple aphid (RAA) eggs. When trees are at the green tip to half-inch green stage (see Apple Growth Stages), a horticultural oil should be applied as a 2 to 3% solution. In orchards with a history of SJS problems, control is improved by adding Lorsban, Esteem, or Centaur to the oil spray.

To detect the first emergence of oriental fruit moth (OFM), set up pheromone traps by the green tip stage at the rate of 1 trap per 10 acres, and check weekly. If using mating disruption for either OFM or codling moth (CM), pheromone dispensers should be hung no later than petal fall and preferably before bloom. (Combination products that control both insects are recommended)

By tight cluster to pink stage, set up traps for CM (1 trap per 10 acres). Where trapping information is desired for leafrollers – tufted apple bud moth (TABM), redbanded leafroller (RBLR), and obliquebanded leafroller (OBLR) – traps should also be set at this time (1 trap per 20 acres). Pink stage is also when RAA eggs begin to hatch, and control can be achieved with either a neonicotinoid (Actara, Assail, Calypso, Belay) or a pyrethroid (Asana, Danitol, Permethrin). Pyrethroids are strongly discouraged because of their toxicity to many natural enemies and tendency to flare populations of ERM, SJS, and woolly apple aphid (WAA). RAA can also be controlled with insecticides applied at petal fall. All insecticides listed for RAA control will also help control tarnished plant bug (TPB) and spotted tentiform leafminer (STLM). Note that maintaining a clean groundcover will often eliminate the need for insecticides to control TPB, and that insecticides specifically targeting STLM are rarely needed because of the effectiveness of biological control agents. 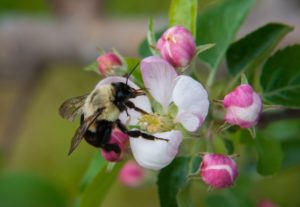 In order to protect pollinators, no insecticides should be applied during bloom. Keeping the orchard floor free of flowering weeds will increase pollination activity in the trees and lessen bee activity after bloom. Continue to monitor and maintain pheromone traps.

If an insecticide was not applied for RAA earlier, or if control was poor, apply an insecticide such as Provado, Actara, Assail, Calypso, or Movento. Petal fall is a critical time for control of the plum curculio (PC), which begins to enter orchards at bloom and has become increasingly problematic in recent years. Insecticides effective against PC include Avaunt, Actara, Imidan, Calypso, or Belay. If RAA control is needed at petal fall choose Actara, Calypso or Belay at this time. 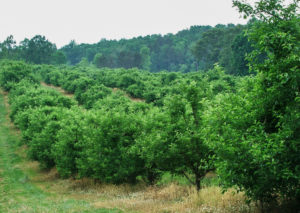 Petal fall is also when first generation OFM can be controlled with any of the insecticides recommended for RAA or PC. If mating disruption is being used for OFM, there is no need to apply insecticides. Also, the insecticide Sevin (carbaryl) is often used for thinning at this time, and it provides control of OFM and suppression of PC.

In some years, green fruitworm (GFW) can be a problem. Scout trees for feeding damage on leaves and new apples, and apply Intrepid or a Bt at early petal fall if damage is significant. Intrepid and Bt are very safe to bees and other pollinators. 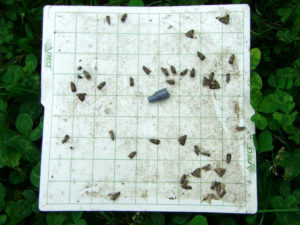 The period of time between 1st and 3rd Cover sprays is a critical time for control of first generation CM. Pheromone traps are a highly useful tool to gauge the intensity of CM populations in orchards. Keeping traps clean and pheromone lures fresh is essential for accurately monitoring adult activity. Use trap captures and degree days to determine the need for and timing of insecticide sprays. Recommended chemicals include Delegate, Altacor or Belt. See the CM section under “IPM Practices for Selected Pests” in our Orchard Management Guide for ways to minimize insecticide applications and the risk of developing resistance.

By second cover, TABM flight is well underway, and a single insecticide applied at 2nd or 3rd cover usually provides season-long control. This insect is much less important now than in the 1990s when it was a primary apple pest in the southeast due to insecticide resistance. The same insecticides effective against codling moth (Delegate, Altacor, or Belt), in addition to Intrepid, are recommended. This insect is not a problem in areas where there are no nearby apple orchards. Insecticides are usually not necessary unless there is a history of damage. Use trap captures and degree days to time applications, and note that TABM sprays often coincide with sprays of late-emerging CM. 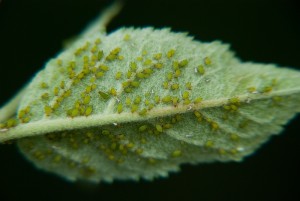 Monitor orchards for white apple leafhopper (WALH), potato leafhopper (PLH), and green apple or spirea aphids (GAA). Infestations of these insects can occur any time from petal fall through the second cover spray, and early detection is important for effective control. Sevin, Actara, Assail, Calypso, Provado, and Avaunt are recommended if insecticides are needed.

Typically, little insect control is required during the period of 4th Cover sprays. 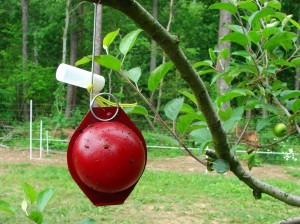 By early June, erect apple maggot (AM) sticky traps baited with fruit essence lures, placing them on outside rows adjacent to abandoned orchards, woods, or other likely sources of flies. The threshold to dictate the need for control is when 5 cumulative flies per trap have been captured, and recommended insecticides include Imidan, Calypso, Provado, or the kaolin-clay product Surround. Although the timing of apple maggot activity varies among years, generally it is most active between mid July and early August in the southeast.

Brown marmorated stink bug (BMSB) is an increasing problem in southeastern orchards, with damage usually appearing from June through harvest. Research to develop effective, user-friendly pheromone traps and control thresholds is still ongoing. Until a reliable management model exists, growers should base the need for insecticides on previous years’ damage levels, current recommendations in the Orchard Management Guide and pest population update, and the advice of their local extension agent.

Degree-day models for CM, OFM, and TABM are less accurate near the end of the growing season, so it is especially important to base insecticide application decisions on pheromone trap captures. Continue to monitor for AM, which typically has peak emergence from mid July to early August.