Find this article at:
go.ncsu.edu/readext?699593
— Written By Jim Walgenbach (2 months ago) and last updated by Stephen Schoof 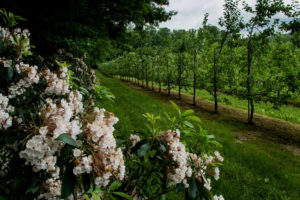 At lower elevations, less than about 1200 ft, cumulative codling moth degree days (DD) now exceed 1000, indicating that the first generation is complete. Insecticides targeting codling moth are probably unnecessary until at least 1400 DD; the exception being in those orchards with high populations that are still capturing more than 5 moths per week in pheromone traps.

In Henderson County (2100 ft), codling moth degree-day accumulations are at about 560 DD, so this pest should still be considered a potential threat in this area. If pheromone trapping is not being conducted, it would be wise to assume a potentially damaging population exists in an orchard. Populations have been low this season, and it has been possible for many to minimize insecticide applications when using pheromone traps to verify low populations.

Tufted apple bud moth DD accumulations in Henderson County average about 710 as of today (June 9). However, degree days are accumulating quickly and 800 DD, optimum time for an insecticide targeting TABM, is expected to occur Saturday (June 13). Excellent control of TABM can be achieved with a single recommended insecticide applied anytime between now and the next two weeks. In those orchards where codling moth is also a concern, Altacor, Verpedryn, and Delegate are recommended. Where codling moth populations are low, Intrepid at 8 oz/acre will provide excellent TABM control, although it is not as efficacious against codling moth as the aforementioned products.

Now is also a time when green apple aphid, potato leafhopper, and European red mite populations traditionally appear in apples. While populations have been low thus far, these are secondary pests to keep an eye on when scouting orchards. There are a wide array of selective insecticides that control both aphids and leafhoppers, so check the Southeastern Apple Manual for those recommendations.