Find this article at:
go.ncsu.edu/readext?701501
— Written By Jim Walgenbach and last updated by Stephen Schoof 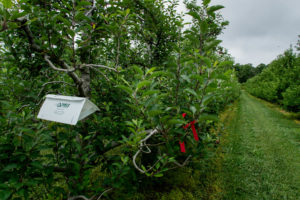 Cumulative degree days (DD) for codling moth in Henderson County are about 690 as of today (June 16). This is indicative of about 90% emergence of overwintered adults and 50% egg hatch. While this insect is still a threat to injure apples, populations have been very low in most orchards. Where pheromone trap captures have been high, insecticide applications are still warranted. Off the mountain in Lincoln/Cleveland County, about 1050 DD have accumulated, which indicates that we are between generations.

TABM DD accumulations in Henderson County are about 865 from biofix as of June 16. Ideal timing for TABM control is between 800 and 1200 DD, although applications made slightly before this (700-750) often result in good control. If an insecticide effective against TABM has not been made within the past week, one should be made at the next application. In those orchards where codling moth remains a concern, Altacor, Verpedryn or Delegate (whichever AI is being used for first-generation codling moth) will also provide excellent control of TABM. In orchards with low codling moth populations, Intrepid at 6 to 8 oz/acre is a good choice for TABM control. In those orchards using mating disruption for codling moth and OFM, remember that this pheromone does not affect TABM populations, so an insecticide is needed for TABM.

Second generation OFM flight is currently underway, but populations of this generation are typically very low due to insecticides applied at petal fall for the first generation, and overlap of this flight with TABM. Trap captures remained very low at our trapping sites during the past week.

Populations of aphids, leafhoppers, and European red mite remain surprisingly low in both commercial orchards and in the non-treated controls of plots at the research station.