Find this article at:
go.ncsu.edu/readext?695776
— Written By Jim Walgenbach (1 month ago) and last updated by Stephen Schoof 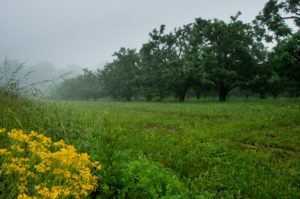 Codling moth remains the insect of greatest concern throughout the region, with degree-day accumulations since biofix ranging from about 325 in Henderson County to 630 in Lincoln County. In orchards not using mating disruption, an initial application is recommended between 250 and 350 DD. Codling moth can remain a threat until about 900 DD, although this can vary considerably depending on population pressure. As a reminder, if making multiple applications against the first generation, insecticides with the same mode of action should be made throughout this time. Wait until second generation codling moth emergences (about 1400 DD) to switch to an insecticide with a different mode of action.

In orchards using mating disruption, an insecticide is usually not recommended until the timing is ideal for tufted apple bud moth (see below).

In Henderson County, where tufted apple bud moth (TABM) is of greatest concern, we are approaching 400 DD. A single application of either Altacor, Delegate, Intrepid, or Verdepryn (same mode of action as Altacor) between 800-1200 DD after biofix will provide season-long control of TABM. The timing of this coincides with about 650 DD for codling moth, which allows for control of both pests.

Apple aphid and potato leafhopper populations have not been observed up to this point, but they should begin to appear over the next couple of weeks. If control of these insects is needed, options include Voliam Flexi (same active as Altacor plus Actara), or addition of a neonicotinoid with one of the above-mentioned insecticides for codling moth or TABM.