Find this article at:
go.ncsu.edu/readext?693035
— Written By Jim Walgenbach (3 months ago) and last updated by Stephen Schoof 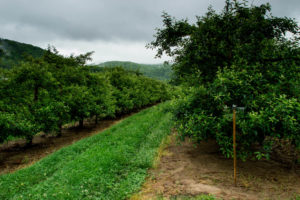 Codling moth pheromone trap captures increased somewhat this week with the return of warmer temperatures, and as of May 19 degree day accumulations ranged from about 220 in Henderson County to 500 in Lincoln and Cleveland County. In orchards with moderate to high codling moth populations, the 250 DD threshold for initial insecticide applications is predicted to occur later this week in Henderson County and other locations with a similar elevation. In orchards with low populations, an insecticide application can be delayed until at least 350 DD, which is predicted to occur in the middle of next week (May 27). Finally, those orchards using mating disruption and where codling moth populations are very low, it is likely that an insecticide targeting lepidopterans can wait until the optimum timing for tufted apple bud moth, which is between 600 and 800 DD.

In lower-elevation orchards where at least one insecticide application has been applied for codling moth, this pest will remain a concern for another couple of weeks, and the need for continued sprays should be based on pheromone trap captures.