Find this article at:
go.ncsu.edu/readext?690570
— Written By Jim Walgenbach and last updated by Brandon Hopper 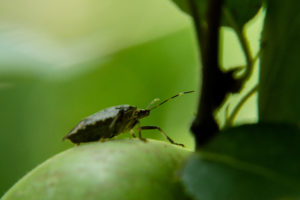 The cool temperatures during the past week suppressed insect activity, as evidenced by the very low pheromone trap captures. However, activity will pick up later in the week with the return of warmer temperatures. The codling moth degree-day (DD) model predicts initial egg hatch to occur at about 250 DD after biofix, which is also the recommended timing of an initial insecticide application in orchards with moderate to high codling moth populations. In orchards with low populations, an application can be delayed until 350 DD. In Henderson County, 250 DD is not expected to occur until May 18. Off the mountain at lower elevations considerably more DD have accumulated. In the Lincoln and Cleveland County areas DD accumulations have reached about 400 DD, which is equivalent to about 10% egg hatch. In these areas, protection of the crops will be important later this week and into next week.

For those concerned about San Jose scale and wanting to target first-generation crawlers, an insecticide application within the next two weeks should be considered. See last week’s update for more information.

I have received several questions about the status of brown marmorated stink bug (BMSB), and in view of the current emergence of overwintering adults, now may be a good time to review its life cycle and potential for damage.

Overwintering Adult Emergence and Egg Laying:  The vast majority of overwintering BMSB adults emerge during April and May. While we are slightly behind the curve this year due to relatively cool temperatures, the return of warmer weather should put us on track to be completed by late May or early June. Overwintering adults reside largely in wooded habitats, feeding and laying eggs on wild hosts from mid-May through July. Egg laying can begin as early as mid-May in lower elevations (piedmont) to late May in mountain apple production regions (>2000 ft); peak oviposition occurs during the month of June. These wooded habitats are also where the vast majority of nymphal populations reside and complete development.

While occasionally a few adults may be found in apple orchards during June, apples are not a highly attractive host during this time. Slightly more attractive hosts are peaches and pears, where BMSB can be more easily found in June. In previous years, high pheromone trap captures of the overwintering generation have occurred in late May.

First Generation Adults:  When first-generation nymphs in wooded areas develop to the adult stage, many of these adults disperse to crops, with a high preference for those plants bearing fruiting structures, including apples and many other crops (peaches, pears, corn, soybeans, etc.). It is this first generation of adults that present the greatest threat to apples. The timing of first-generation adults varies from July in the piedmont to August in the mountains.

Predicting Adult Emergence:  We have recently completed a degree-day (DD) model that can be used to predict emergence of first-generation adults. The model functions similar to that of the codling moth DD model. April 1 is used as biofix (date to begin accumulating DD) and lower and upper developmental threshold temperatures of 14.2°C and 35.6°C, respectively, are used to calculate DD. First-generation adults begin to emerge at about 700 DD (°C), with 10% of adult emergence complete by 750 DD; the range of DD during for emergence of 10-90% emergence occurs is 740-1245 DD (°C). In 2019, 700 DD occurred on 3 July in Cleveland County and 31 July in Henderson County. Further east in Wayne County in the coastal plain region, 700 DD occurred on 8 June. The equivalent of 700 cumulative DD (°C) in Fahrenheit is 1400 DD (°F)

Pheromone Trap Threshold:  While we can now predict when first-generation adults emerge, it should be recognized that not all locations have damaging populations of BMSB. Last year we conducted studies to assess a threshold of a cumulative capture of 4 BMSB adults per trap as a trigger for insecticide applications – weekly trap captures were added for each successive week. This threshold was deemed too low as it resulted in over spraying. These studies will be continued this year to try and narrow down an appropriate threshold level.

In the next few weeks we will begin reporting on BMSB DD accumulations and pheromone trap captures in the region. 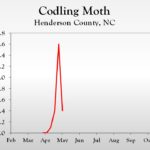 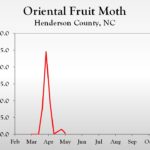 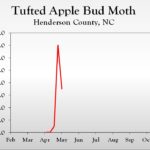 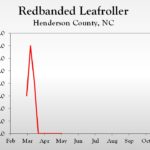