Find this article at:
go.ncsu.edu/readext?683979
— Written By Jim Walgenbach and last updated by Stephen Schoof

Attention Turns to the Codling Moth 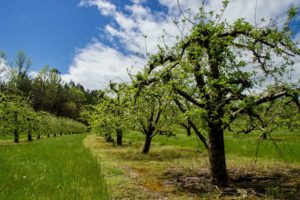 With petal fall sprays complete, the next several weeks will be focused predominately on codling moth. Biofix varied widely between the piedmont and mountain regions this year, ranging from April 1 in Lincoln County to as recent as April 20 in Henderson County. Based on these dates, codling moth degree day accumulations range from approximately 275 (Lincoln County at 850 ft) to only about 70 (Henderson County at 2100 ft). The codling moth DD model recommends initial sprays for the first generation at 250 DD under moderate to high pressure. Under low pressure, initial applications can be delayed until about 350 DD. Based on current DD accumulations, sprays targeting the first generation should be made now in the piedmont region. In higher elevations, 250 DD is not expected for at least another 10 days.

The two classes of insecticides recommended for codling moth remain the anthranilic diamides (MOA group 28, including Altacor, Exirel, and Verdepyrn) and spinosyns (MOA group 5, including Delegate). These two groups have been used for codling moth for >10 years, and remain the most effective options. One reason they remain so effective is because of good insecticide resistance management practices used by growers. This program consists of using different classes of insecticides against different generations. For instance, regardless of how many applications are required to control the first generation (usually from 1 to 3 sprays), all applications should be from the same class – either anthranilic diamide OR spinosyn. Whichever class was used against the first generation should NOT be used against the second generation in July; instead use an insecticide from the other class.

It is also important to remember that each of the three different insecticide products in the anthranilic diamide class have the same mode of action. Hence, it is all right to use more than one product during the same generation. Finally, for those using Voliam Flexi, this premix includes chlorantraniliprole, the same active ingredient as Altacor. So for codling moth resistance management practices, it is also classified as an anthranilic diamide.

For those growers using mating disruption, insecticides for codling moth are usually not necessary against the first generation – although a codling moth-active product is recommended for leafrollers at third cover. For those that may be skipping the use of mating disruption after having used it for numerous years, populations will likely remain low, but pheromone trapping should be used to confirm low populations and the need for insecticide applications