Find this article at:
go.ncsu.edu/readext?530918
— Written By Sara Villani 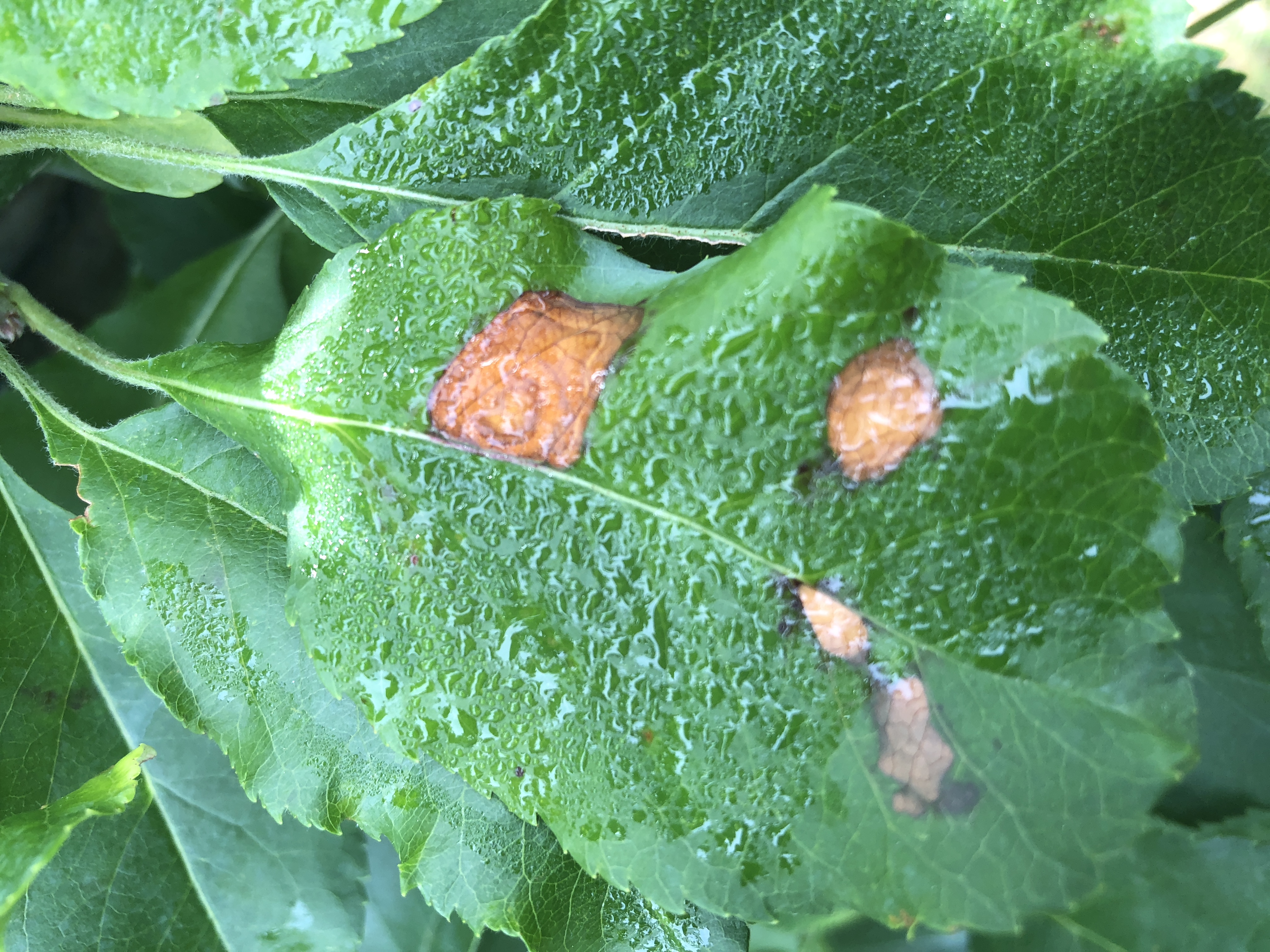 NEWA weather stations located in Polk and Henderson County apple orchards were reporting that 14-24 inches of rain fell during the month of May with nearly all rainfall occurring during the second half of the month. With such constant and intense rains, maintaining fungicide residues on apples to combat extended infection periods for Glomerella leaf spot and fruit rot was extremely challenging. To likely the surprise of no apple grower in Western NC, symptoms of Glomerella leaf spot (GLS) and fruit rot (GFR) have been reported in both Western NC counties this past week. At MHCREC, I observed initial symptoms on leaves and fruit on un-sprayed ‘Gala’ trees last Friday (week of May 27th), and leaf symptoms on managed ‘Pink Lady'(above photo) and ‘Golden Delicious’ cultivars today (June 5th). For those unfamiliar with the appearance of early leaf and fruit infections I’ve included a photo below for reference. On leaves, GLS symptoms initially appear as purple flecks or smudges leaves with poorly defined margins, whereas on fruit, symptoms appear as small circular depressions or “sunken spots”. If scouting this week, concentrate your efforts on the inner canopy (greater humidity) and on older leaves surrounding apple clusters. I have also observed quite a bit of frogeye leaf spot (several culitvars) and Alternaria leaf blotch (‘Red Delicious’) over the past week, so be careful not to confuse these spots with those caused by Glomerella/Colletotrichum (see Leaf Spots of Bother article for more info).

Several stakeholders have asked what to do next for GLS/GFR management this season. My opinion is that it’s way too early to throw in the towel even if you are already observing symptoms in your orchard. Last year we evaluated the number of days from GLS symptom onset until 40% incidence was reached in our GLS research block at MHCREC. During this same period, we also evaluated how many days elapsed until 10% defoliation to occur for this fungicide program. The bottom line is that even in an orchard with extremely high inoculum pressure and using a spray program with longer-than-recommended application intervals, in our standard fungicide program (Merivon: PF, 1C, 8C, 9C; Captan + ProPhyt: other covers) GLS symptoms progressed slowly compared to our untreated program. Forty days after symptoms initially appeared on leaves, there was still less than 10% GLS incidence on trees and 40% disease incidence until 71 days (fruit harvest period). Furthermore, only 3% of leaves were defoliated 80 days into our evaluations (past ‘Gala’ harvest). The incidence of fruit symptoms at harvest on this treatment (again in a high pressure orchard) was 7.5%.

Days to 40% GLS incidence (left) and days to 10% defoliation due to GLS (right). Defoliation failed to reach the 10% threshold even 80 days after initial symptom observation.

All of that said, my suggestion moving forward is to continue summer cover programs at tight intervals 7 to 10 days and continue to scout for GLS/GFR symptoms. If 2 inches or more of rain occurs make sure to reapply, and if there are rains are predicted daily, prioritize GLS or bitter rot susceptible cultivars first and don’t be afraid to apply Captan or Ziram during a light rain. According to our research, the most efficacious fungicides for GLS are:

In addition to the usual suspects: shoot blight, apple scab, and powdery mildew, two other diseases have caught my attention this week. Alternaria leaf blotch has been popping up on ‘Red Delicious’, including those at MHCREC. Symptoms are similar to frogeye leaf spot: circular lesion, purple border, tan spot: “frogeye” in lesion center. However, with Alternaria leaf blotch, symptoms will be more evenly distributed throughout the tree. With severe infections, leaves will be become chlorotic as the season progresses and may prematurely defoliate. The same fungicides used for GLS management: FRAC 11 and captan are also effective against Alternaria leaf blotch. Flare-ups of red mite also contribute to Alternaria leaf blotch development, so a miteacide application may also be warranted. 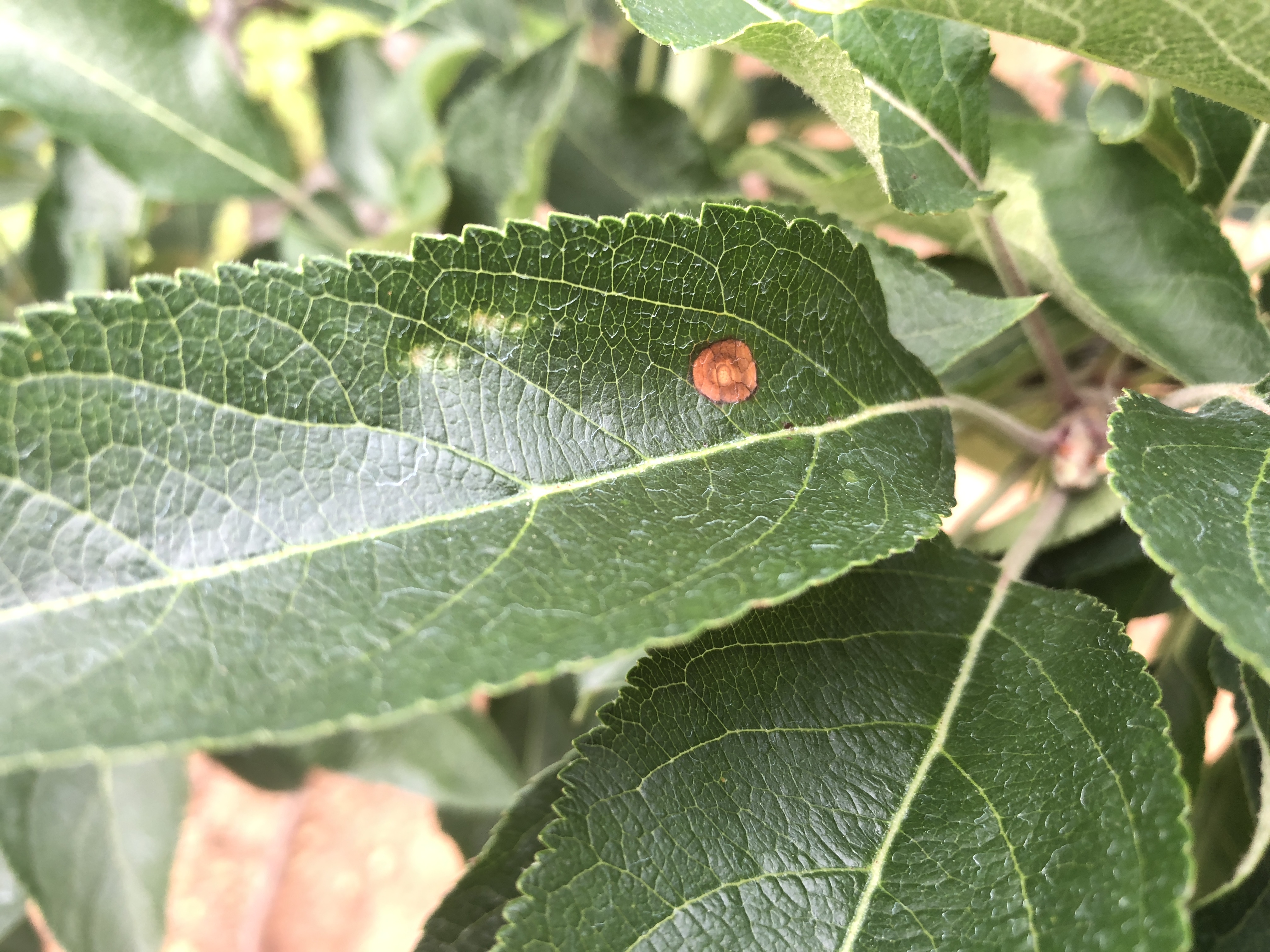 Apple rusts have also been observed throughout Western NC at a greater frequency than previous years. Fortunately, most reports have indicated infection only to leaves and not to fruit. It might still be worth including an S.I. (FRAC 3) fungicide in the tank mix to further slow down any symptom development over the next couple weeks. Remember, that unlike diseases such as apple scab, there is no secondary cycle on apple and no new infections are likely to occur this year. 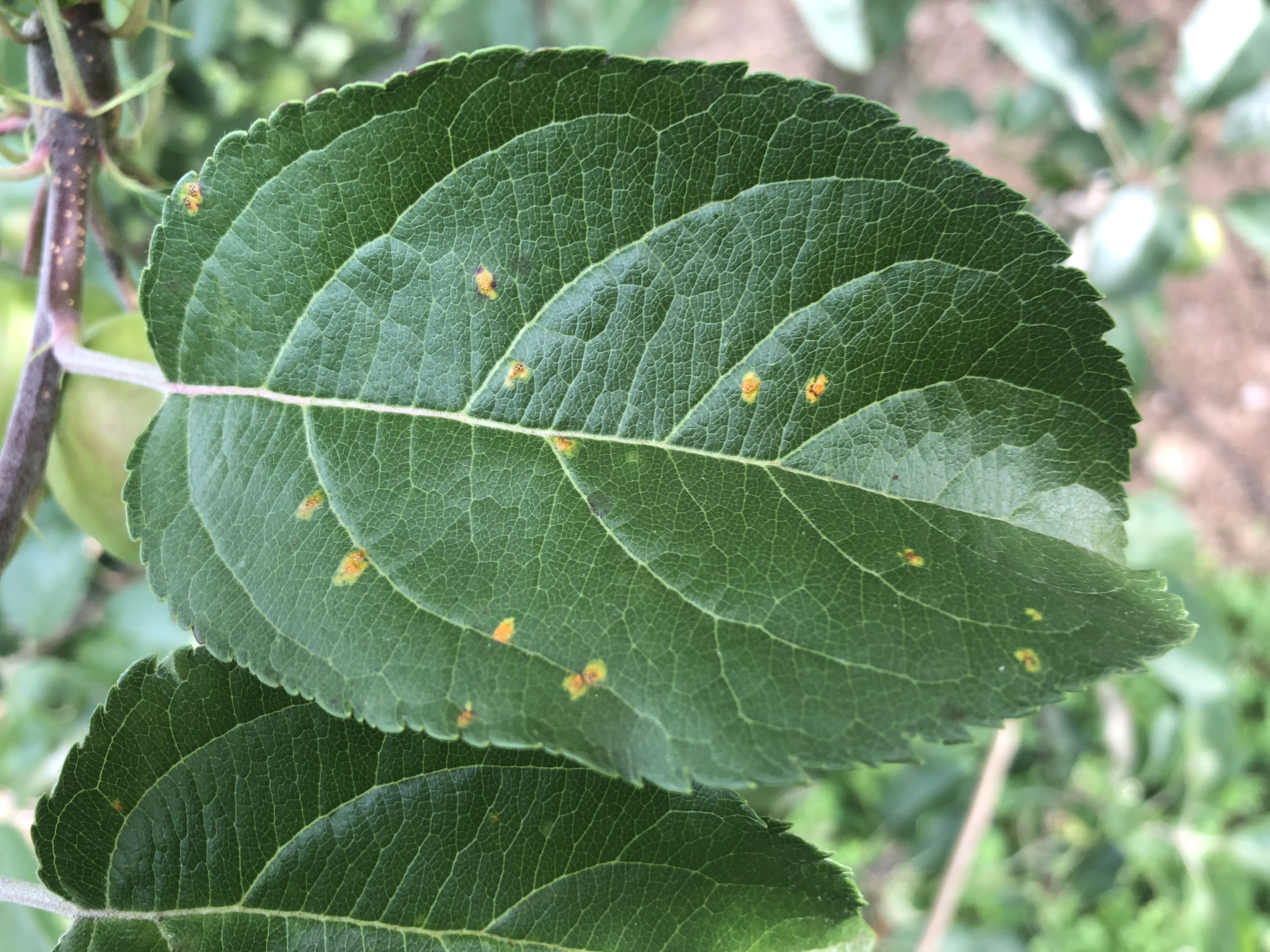