Leaf Spots of Bother: The Troublesome 3

Find this article at:
go.ncsu.edu/readext?514225
— Written By Sara Villani

Identification of apple leaf spot diseases can be a major headache for even the most experienced growers and extension apple pathologists alike. Unfortunately, North Carolina apple growers are faced with an onslaught of unsightly leaf spots annually. Minimizing leaf spot disease incidence and severity with a combination of cultural and chemical management practices is critical for preventing premature defoliation and subsequent fruit infection. The following addresses identification and management of the “Troublesome 3” leaf spot diseases mid-Atlantic/SE growers need to be on the lookout for as we move through the summer towards

Frogeye leaf spot is caused by the fungal pathogen, Botryosphaeria obtusa, the same pathogen that can cause limb cankers and black rot of apple fruit. The pathogen primarily overwinters in dead bark, cankers, and mummified fruit produced during chemical thinning. Dead shoots resulting from fire blight infection are particularly ideal overwintering locations for the frogeye leaf spot pathogen. Considering the severity of fire blight throughout NC last year, removal and destruction of symptomatic fire blight shoots is crucial for reducing overwintering populations of B. obtusa. 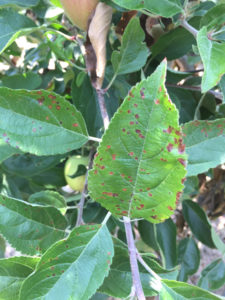 Symptoms: Symptoms of frogeye leaf spot will usually start to appear 1 to 3 weeks after petal fall as small purple flecks on leaves. As the disease progresses, the flecks will expand to “1/8”-“¼” lesions with occasional purple margins and tan/brown centers. Severe leaf infections can lead to yellowing of leaves (chlorosis) and early defoliation.

Management: Both cultural and chemical management are important for control of frogeye leaf spot.

Fire blight infected shoots/limbs should be promptly removed and destroyed. Removal of cankers and mummies during winter pruning can also be helpful for minimizing frogeye leaf spot. In addition, be sure to remove any fruit stems that may be left of trees after harvest as they are readily colonized by B. obtusa. In orchards where frogeye leaf spot/black rot has been problematic, a season long fungicide program is recommended. During summer covers, many of the fungicides recommended for Glomerella leaf spot/bitter rot control including the multi-site protectants captan and ziram, and single-site fungicides including Flint 50WG, Merivon, Luna Sensation, and Pristine are effective for frogeye leaf spot/black rot control as well. In addition thiophanate-methyl and some DMI fungicides such as Inspire Super are effective against the disease.

Alternaria leaf blotch is caused by the fungal pathogen Alternaria mali. Lesions are similar in appearance to frogeye leaf spot, but are more uniformly distributed throughout the tree canopy. Similar to the apple scab pathogen V. inaequalis, and the Glomerella leaf spot pathogen, G. cingulata, Alternaria primarily overwinters on diseased leaves on the ground. 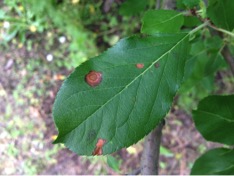 Management: Both cultural and chemical management are important for control of Alternaria leaf blotch. Cultural practices should include removal and destruction of dead and diseased wood from the tree. Chemical management of Alternaria during the summer should be aimed at minimizing leaf spot severity and preventing fruit infection. Fungicides used to control frogeye leaf spot/black rot should also be effective against Alternaria leaf blotch.

Glomerella leaf spot (GLS) is caused by the fungal pathogen, Glomerella cingulata. For those still unfamiliar with GLS, early lesions look strikingly similar to frogeye leaf spot and Alternaria leaf spot. However, unlike the other two leaf spot diseases, lesions of GLS do not usually appear in North Carolina until mid-July. 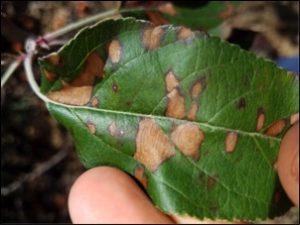 Management: Like the other leaf spot diseases mentioned in this article, both cultural and chemical management are important for control of GLS. Because the pathogen responsible for GLS is believed to overwinter in fruit mummies, cankers, and dead limbs/shoots resulting from fire blight, pruning and destruction of these inoculum sources is important for limiting disease. In addition, it is suspected that the pathogen overwinters on the diseased leaves along the orchard floor. Practices aimed at accelerating leaf breakdown such as a urea application during the fall or flail mowing is also recommended. Chemical management of GLS should be initiated around petal fall and continue throughout the summer on an approximately 10-14 day “cover spray” interval (depending on environmental conditions). Captan + Prophyt and the SDHI/QOI premix product Merivon, have shown the greatest levels of control against GLS in field trials at the Mountain Horticultural Crops Research and Extension Center.