Find this article at:
go.ncsu.edu/readext?526127
— Written By Sara Villani 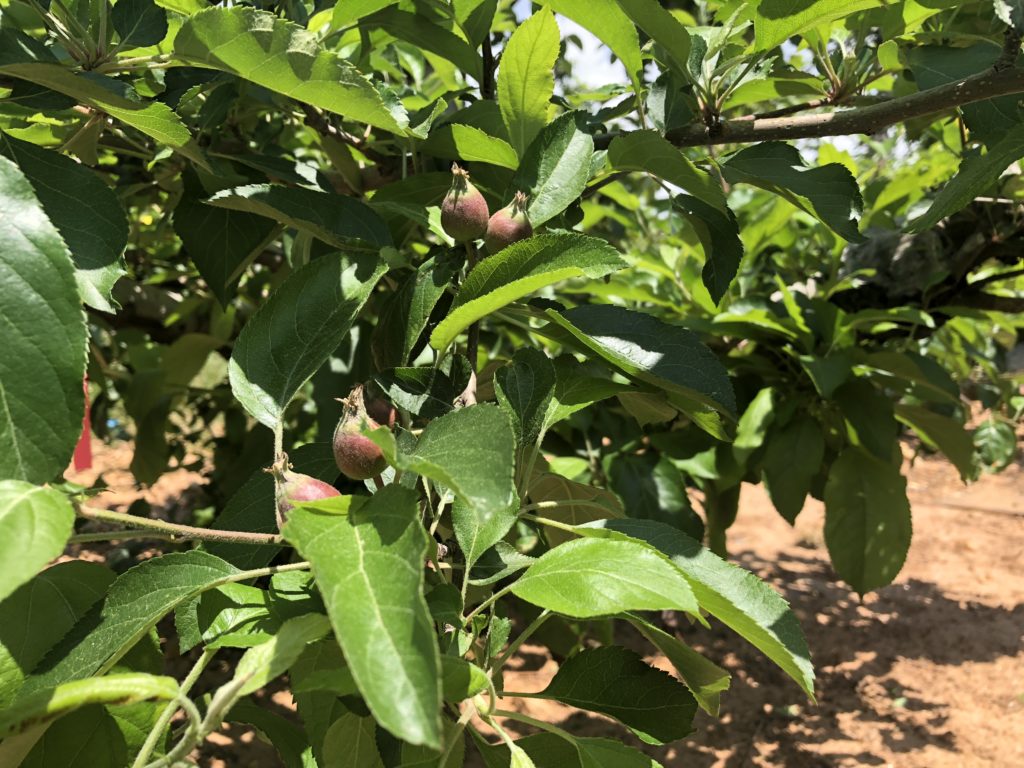 Due to the threat of Glomerella leaf spot and bitter rot in the southeast, the first cover spray and in fact all cover sprays should be applied on a 7 to 10 day interval. On Glomerella susceptible varieties, waiting 14 days between covers and we’ve observed several control failures in orchards that have stretched out their application intervals. For the 1st Cover application in the southeast, Glomerella leaf spot and shoot blight should be your primary targets, however, other diseases such as secondary scab and powdery mildew should certainly not be overlooked.

Management for Glomerella leaf spot and fruit rot was highlighted in the Petal Fall Disease Update post as well as the Glomerella Leaf Spot Focus post from two weeks ago. We are approaching management for Glomerella leaf spot similar to most diseases: Hit it hard and early. That said, for a fungicide program for 1st cover, my suggestion is to apply Merivon (5.5 fl oz) per acre + mancozeb 3 lbs per acre. Other options include Flint Extra which is a new liquid formulation for trifloxystrobin by Bayer, Pristine WG, or Luna Sensation. I’ve been asked about a different stroby (FRAC 11), Sovran, for management and have not tested it yet in our trials. That said, I’m not comfortable yet comparing its efficacy to the products mentioned above, until my grad student, Kendall Johnson, at least does some in vitro screening in the lab. Again, for Flint, Pristine, or Luna Sensation, be sure to include mancozeb or another multi-site protectant in the tank mix for resistance management. 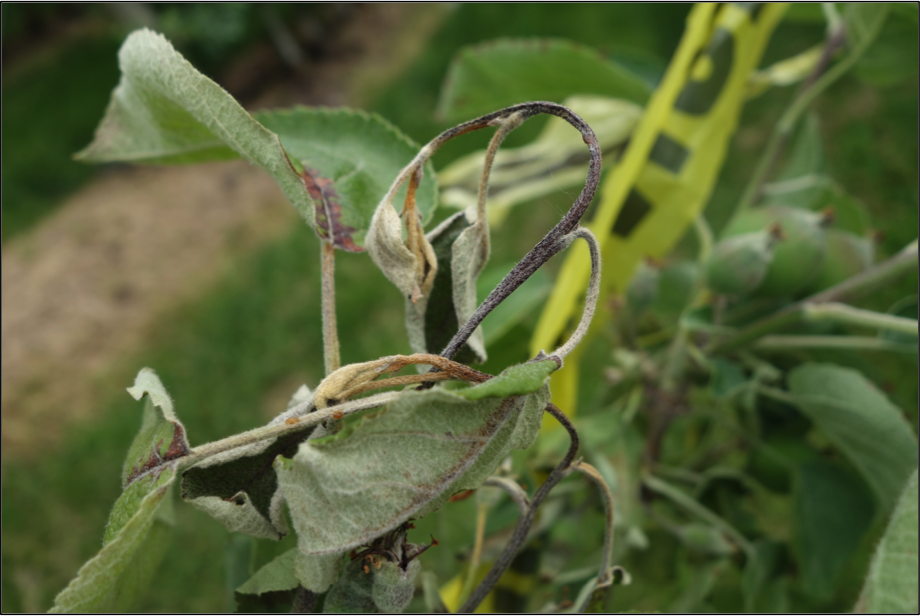 Application of the plant growth regulator, prohexadione calcium (marketed as Apogee or Kudos) has demonstrated the greatest efficacy against shoot blight in commercial plantings and in research trials. The chemical retards shoot growth, thereby reducing the amount of susceptible tissue available. Prohexadione calcium also thickens xylem cell walls acting as a barrier to the bacterium. At least two applications of prohexadione calcium should be applied during the season for shoot blight management. For mature trees a 6-12 oz/100 gal rate is recommended at 1-3″ of shoot growth and then 14-21 days later. For trees less than 5 years old in which you are trying to fill the canopy, make applications at the same timings but at a reduced rate of 3-6 oz/100 gallons. If you haven’t made an application of prohexadione calcium yet for shoot blight control I strongly suggest you do so. If you are concerned about stunting tree growth, other (often less efficacious) options are below in the figure. For more information on shoot blight refer to the NCSU Fire Blight Fact Sheet.

Prediction of shoot blight is tough. If insect vectors are available to move the bacterium and green tissue is emerging, there’s a chance for infection if conducive weather is present. At the 2018 Southeastern Apple Grower’s Meeting Kerik Cox provided some good tips on dealing with fire blight strikes:

A word of my own advice-fire blight will kill a young tree, Apogee won’t. Even if an Apogee application delays the growth of a young tree, it’s better to make an application then to watch your tree die a slow and agonizing death.

Young/New orchards/Nurseries: Don’t forget about these trees! Often their phenology/growth stage does not line up to mature trees, particularly if they were just planted this year. Make sure to apply strep during bloom. For other growth stages (including green tip) I suggest make copper applications on a maximum 14 day interval. Use the bloom/low rate of copper so that you don’t burn the leaf tissue. Also, make sure you are regularly checking the trees for phtyotoxicity on leaves from the copper and for fire blight strikes!