Preparing for Glomerella Leaf Spot and Fruit Rot in 2018

Find this article at:
go.ncsu.edu/readext?523205
— Written By Sara Villani

As several cultivars enter petal fall in North Carolina, it is now a good time to be prepared for managing Glomerella Leaf Spot and Bitter Rot. Glomerella leaf spot (GLS) and fruit rot (GFR) a devastating fungal disease of apple that results in premature defoliation and diminished fruit quality or unmarketable fruit. While GLS must be managed annually on susceptible cultivars in the Southeast, other apple growing regions in the eastern US have reported occasional outbreaks during hot and humid growing seasons. For the remainder of this post, I will attempt to summarize results of our GLS/GFR research over the past couple of years, answer questions I commonly get from stakeholders, and provide some final recommendations for managing GLS in 2018.

What Pathogen is causing Glomerella Leaf Spot and Fruit Rot?

In North Carolina Glomerella leaf spot and fruit rot have been predominantly caused by Colletotrichum fructicola, a member of the Colletotrichum gloeosporiodes species complex.

What are the Signs and Symptoms of Glomerella Leaf Spot and Fruit Rot? 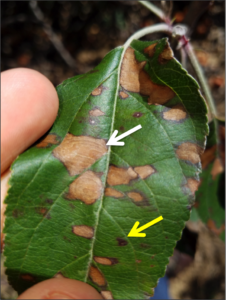 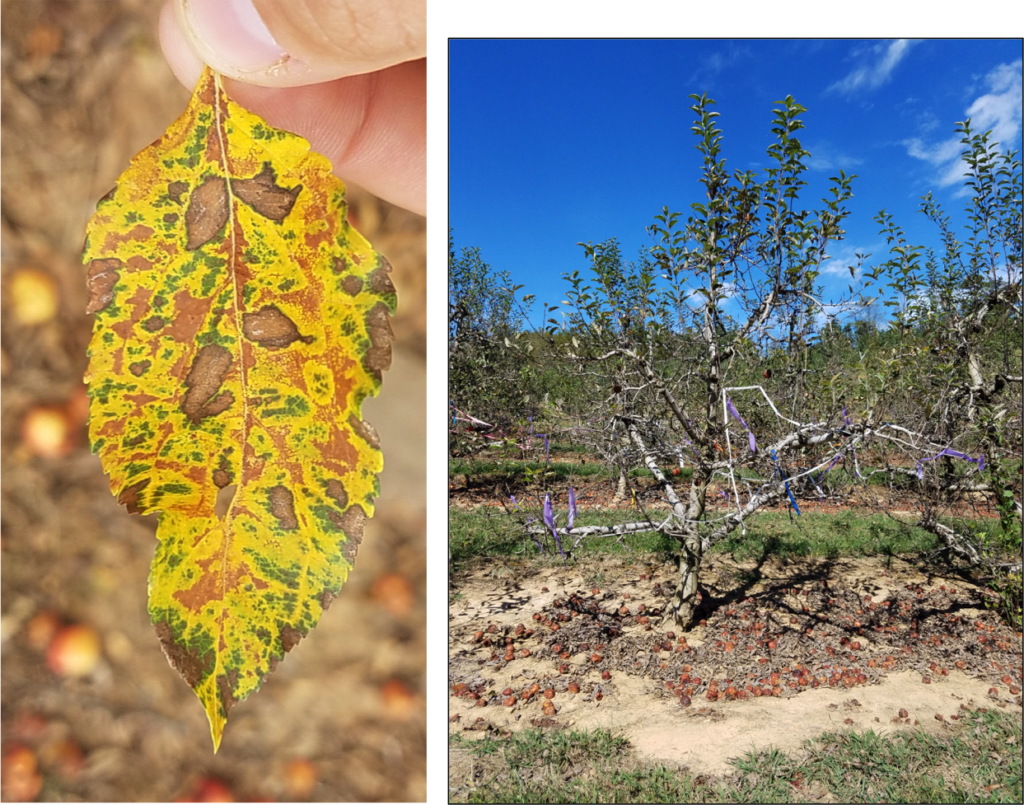 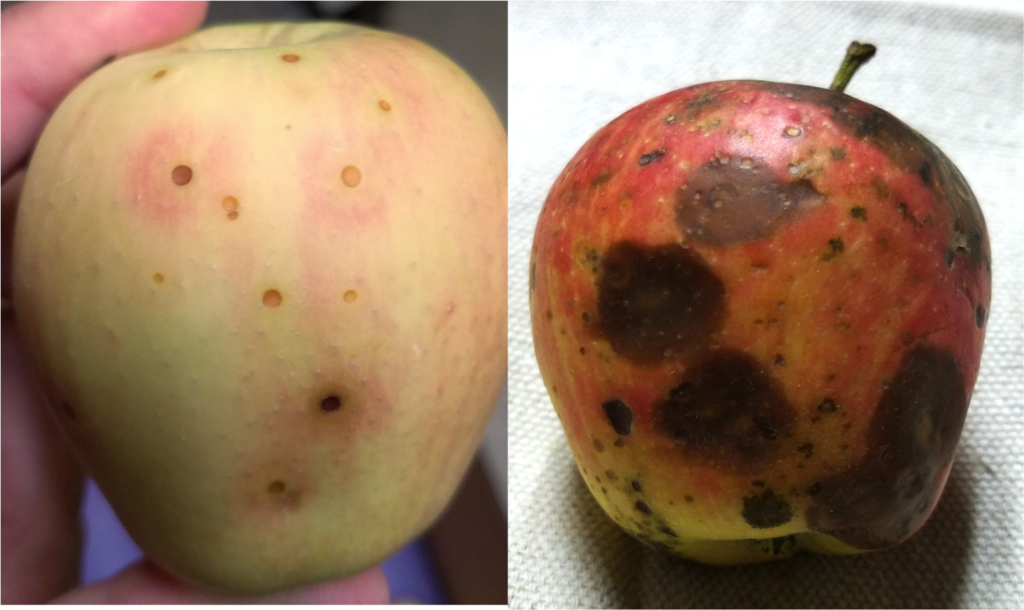 Are All Cultivars Susceptible to Glomerella Leaf Spot and Fruit Rot?

We are currently starting investigations into this topic in our lab. For now we can only comment on what we’ve observed under field conditions and observations from countries with a history of Glomerella leaf spot. So far in NC, we’ve only seen cultivars primarily with ‘Golden Delicious’ parentage showing Glomerella leaf spot/fruit rot symptoms including ‘Gala’, ‘Pink Lady’, ‘Jonagold’ and of course, ‘Golden Delicious’. Symptoms have also been observed on ‘Granny Smith’.

Where is the Inoculum coming from?

Good question and one still under investigation! Similar to the apple scab pathogen, Venturia inaequalis, one source of primary inoculum for GLS are ascopsores from overwintering survival structures called perithecia. However, viable conidia also likely contributing to primary infection have been identified in wood crevices, cankers, and buds. Since I have been in NC, I have only observed a secondary cycle for GLS/GFR during the summer of 2017, and suspect this was likely due to the warm and humid conditions we experienced last summer compared to 2015 and 2016. Interestingly, acervuli and conidia were observed only on fruit lesions in 2017, whereas perthicial development was only observed on fallen leaves. Furthermore, mature ascopores were not observed during the summer suggesting that fruit infection may be more important for GLS/GFR epidemics. In addition to inoculum from the host, several other hosts, including fruit crops and weeds (Virginia Creeper, Horse Nettle), may fuel a disease epidemic during the summer.

When should Fungicide Applications be Initiated for GLS/GFR Management?

Infection by conidia of Colletotrichum fructicola causing GLS and GFR occurs in a temperature range of 59F to 95F and requires a relative humidity near 100%. If a standard apple scab program with a protectant fungicide (i.e. mancozeb) is being applied through bloom, programs for GLS/GFR should be initiated around the petal fall growth stage.

What Fungicide Classes are the Most Efficacious Against GLS?

With support from the NCDA & CS Specialty Crop Block Grant Program, Kendall Johnson, a graduate student in my program, has been investigating this question as part of her Master’s Degree research. In 2017, a non-rotational fungicide trial was conducted at NC State University MHCREC in Mills River, NC to evaluate the efficacy of  fungicides representing several FRAC groups (different modes of action). A total of ten fungicide applications were made to 20-yr-old ‘Tenroy Gala’ trees on M.7 rootstock on approximately 10 to 21 day intervals between petal fall (April 25) and harvest (August 19). The incidence of GLS (on leaves) was evaluated throughout the season and data is represented as “relative area under the disease progress curve” (rAUDPC), whereas the incidence of Glomerella fruit spot/rot was evaluated at harvest. In summary, results from this trial suggest that strobilurin (FRAC 11) fungicides or applications of a protectant fungicide  (captan or EBDC) + ProPhyt provide the highest efficacy against GLS and GFR. 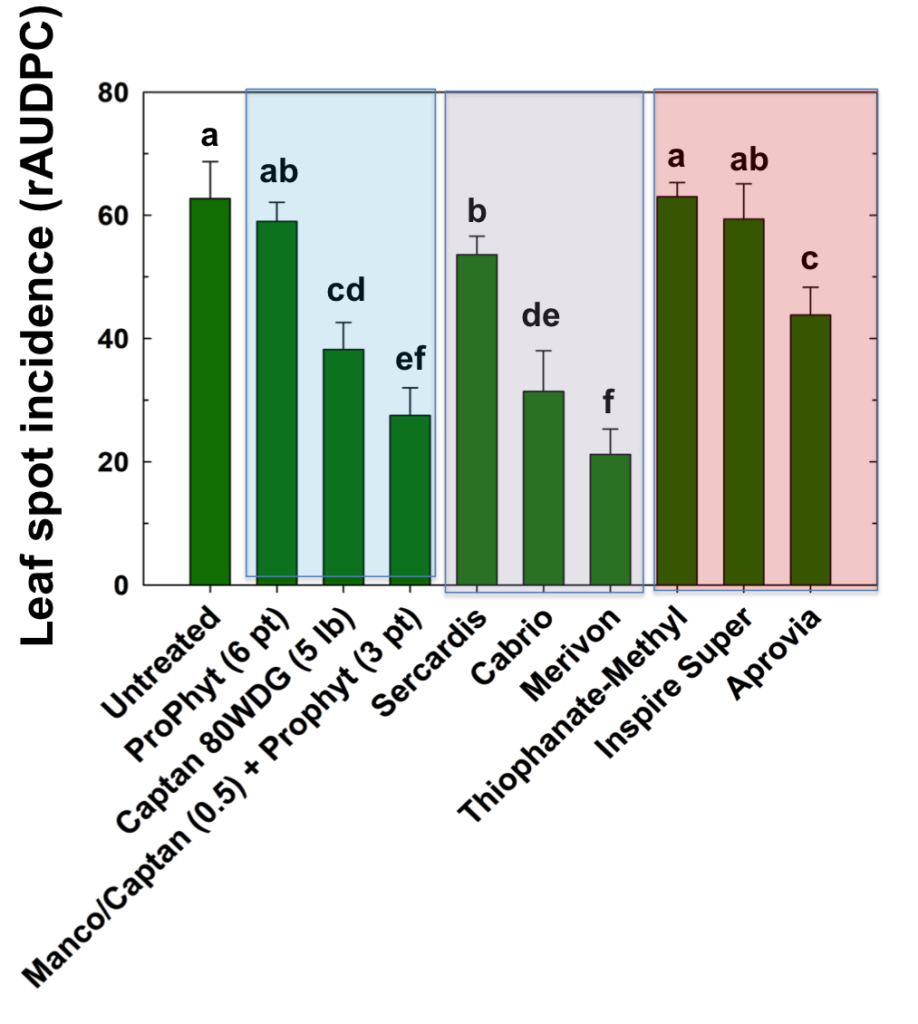 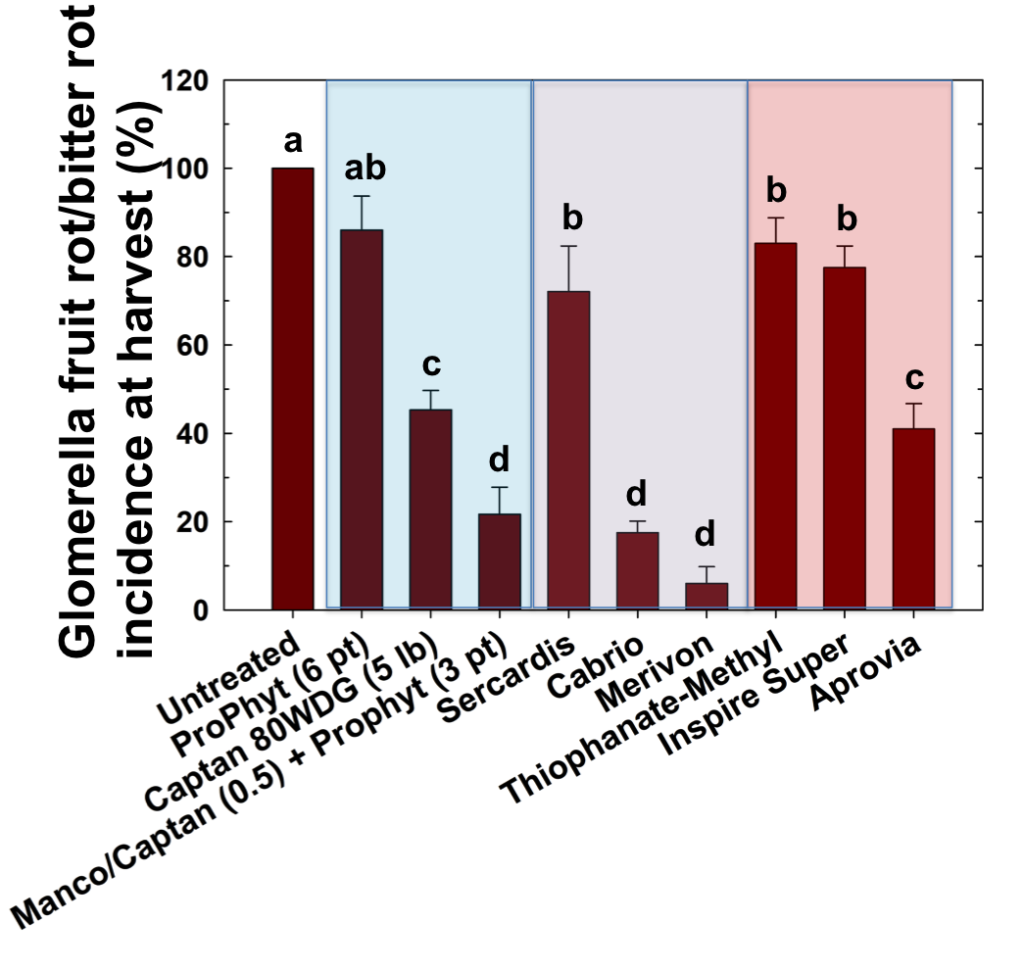 Incidence of Glomerella fruit spot or rot on ‘Gala’ fruit at harvest, 2017.

Tips for Managing GLS/GFR with Fungicides in 2018