Find this article at:
go.ncsu.edu/readext?869377
— Written By Sara Villani 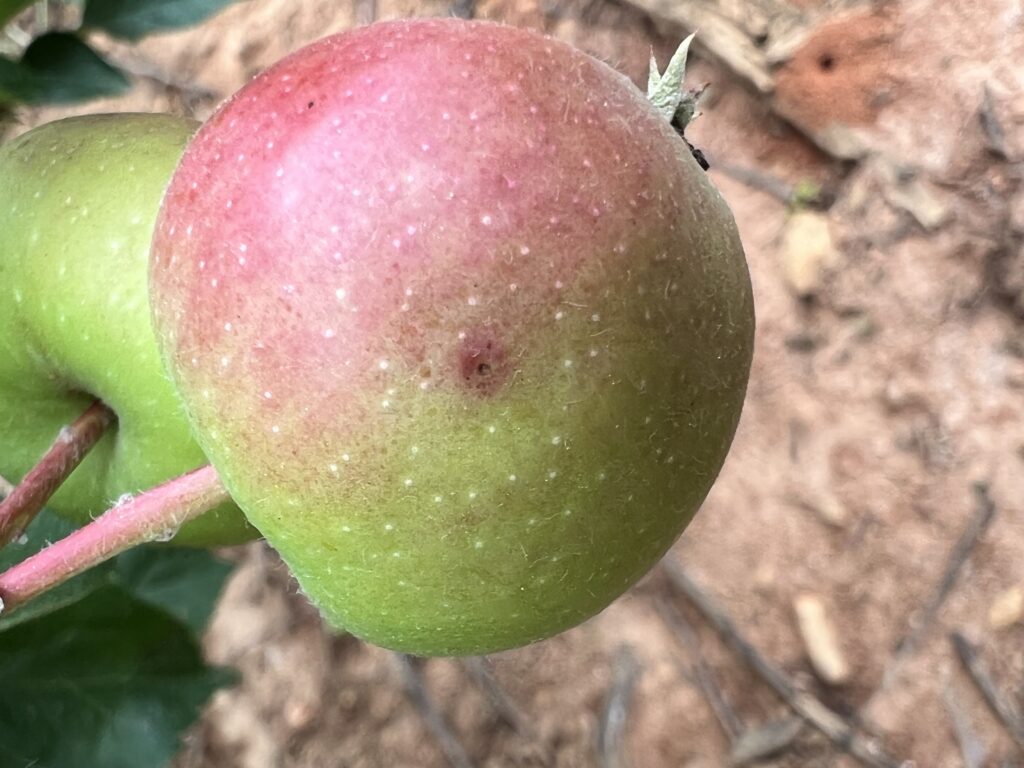 Last week’s post could not have been more timely concerning Glomerella leaf spot and bitter rot. Unfortunately the disease was on its typical Memorial Day weekend schedule, and we are seeing symptoms in orchards in both Henderson and Polk County. Two observations so far in the few orchards in which I’ve seen it:

‘Gala’ and ‘Golden Delicious’ have been the two cultivars so far in which we’ve seen symptoms. Symptoms were more advanced than I would have anticipated, but the good news is that I’m not seeing too many new leaf lesions emerging. Scrolling back through the weather for Mills River on the NEWA website, the last 10 days of May and first 2 days of June the precipitation and/or leaf wetting hours combined with the day and nighttime temps aligned perfectly for GLS/bitter rot issues.

I would advise you to go out and scout cultivars that are highly susceptible to GLS or bitter rot and identify any hot spots. Also, if you’ve got a knack for detecting GLS try to look for early infections: 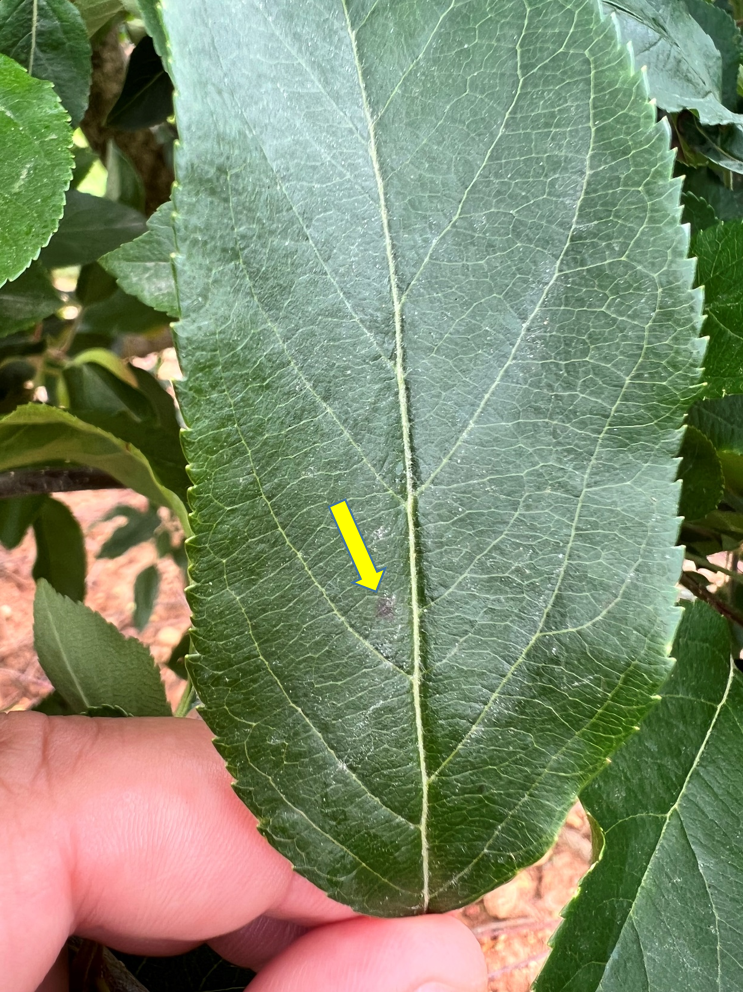 As I mentioned, some infections that we’ve been observing are relatively advanced: 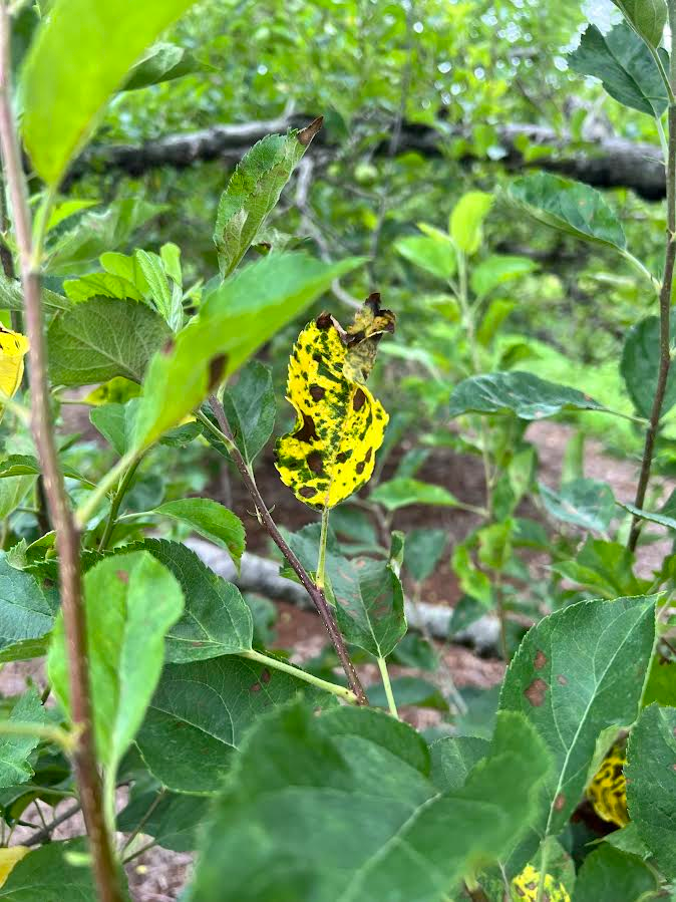 If you missed last week’s post, here my most important take home messages regarding GLS management:

You can read my other tips on this Apple Disease Update.

The other disease warning I’d like to give this week is on Marssonina Leaf Blotch. Next week my post will focus more extensively on Marssonina, but for the purpose this week I simply want you to be aware of early symptoms. In general, early symptoms of MLB on leaves look quite similar to early symptoms of GLS and frogeye leaf spot- purple to red spots or flecks on leaves. In general we’ve found that early MLB spots tend to be more clustered together on one side of a leaf but this always isn’t the case. My recommendation is to head out to Rome Beauty or Fuji, two cultivars where we have already identified symptoms this year, and check for any symptoms. This won’t help you differentiate between frogeye and MLB, but GLS does not occur (to our knowledge) on these cultivars. 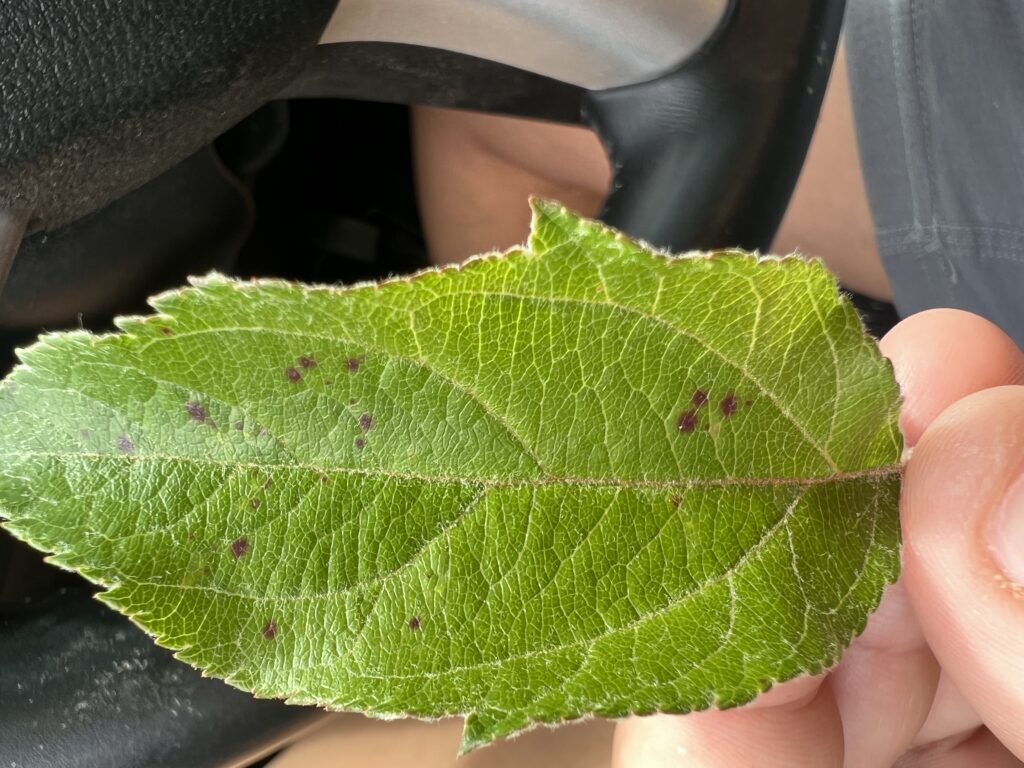 For now, stay on course with the protectant fungicide plan for both diseases. If you haven’t applied a stroby yet this season or have just applied one application of a stroby (FRAC 11) such as Merivon or Pristine or Luna Sensation or Flint, I would consider applying one of these fungicides with either a half rate of Ziram or Captan this week.