Find this article at:
go.ncsu.edu/readext?872320
— Written By Sara Villani 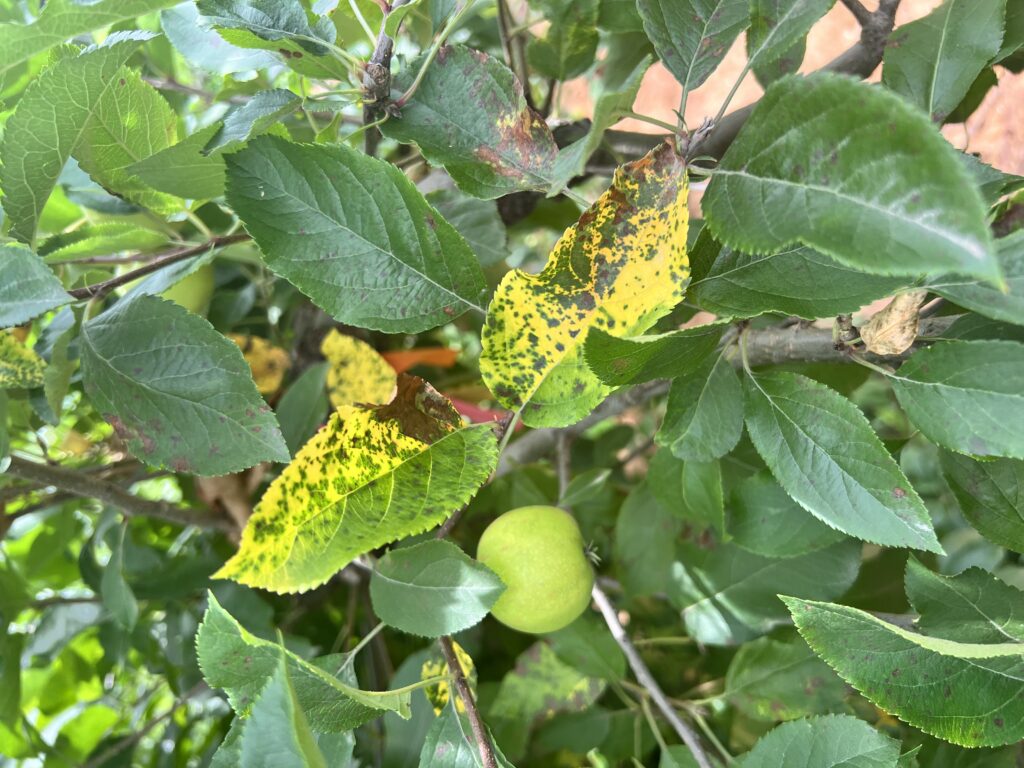 This afternoon I left the office prepared to take photos of Glomerella leaf spot in our Gala research orchard unsprayed trees. Instead, I was rudely greeted with a bunch of yellowing, blotchy leaves (see photo above). Don’t get me wrong, there were certainly clusters of Glomerella in check trees, but this was the first year I’ve seen Marssonina Leaf Blotch (MLB) i) Arrive with such severity so early and ii) Have such a high incidence and severe symptoms on ‘Gala’. In fact, I was so shocked I called my colleague at Penn State to confirm my observations.

While MLB has “historically” been a problem primarily on ‘Rome Beauty’ here in NC, it’s been reported that most if not all apple cultivars are susceptible to the disease. While I haven’t yet had a reason to be too concerned about the economic impact of this disease in the past few years because it had been causing issues on large Rome trees (which could stand to lose a few trees anyways) and because we hadn’t seen symptoms on fruit, this year I’m slightly more concerned.

That all said, trees in which we’ve been spraying with either Captan or Captan + ProPhyt rotated with Captan + Ziram on a 7 to 10 day interval are free of MLB and have little to no symptoms of GLS. These fungicides applied at a half to 3/4 rate have been efficacious as general covers when applied on the 7-10 day interval both with an airblast spray at MHCREC or using my Solo MistBlower in our pathology research orchards. As I always mention, if significant rain is in the forecast (which last I looked doesn’t seem to be the case this week) add Merivon, Flint, or another strobilurin fungicide to your tank mix. Also, if you need some extra protection against flyspeck/sooty blotch consider including Topsin in every other application. 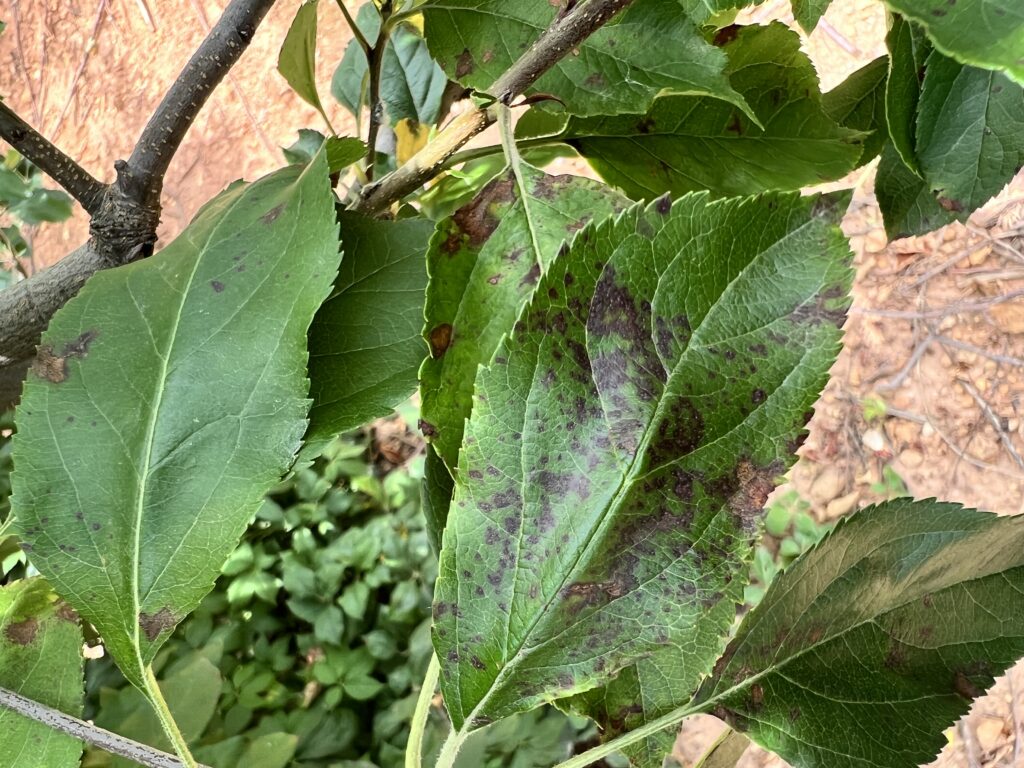 Symptoms of MLB on ‘Gala’ leaves.

Lastly this week I wanted to circle back to our Big Three “early season” diseases: Apple Scab, Powdery Mildew, and Apple Rust. Scouting our Rome trial today, Powdery Mildew was by far the most prevalent and most severe in our efficacy trials. Currently, I’m still seeing active primary infections as well as secondary infections: 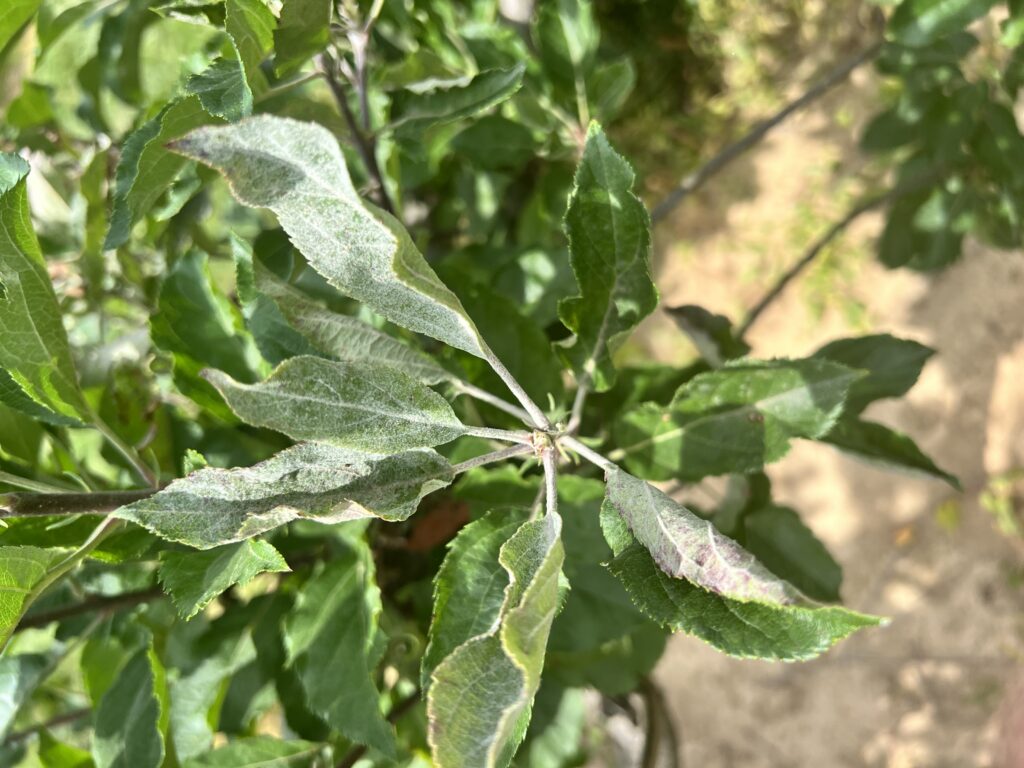 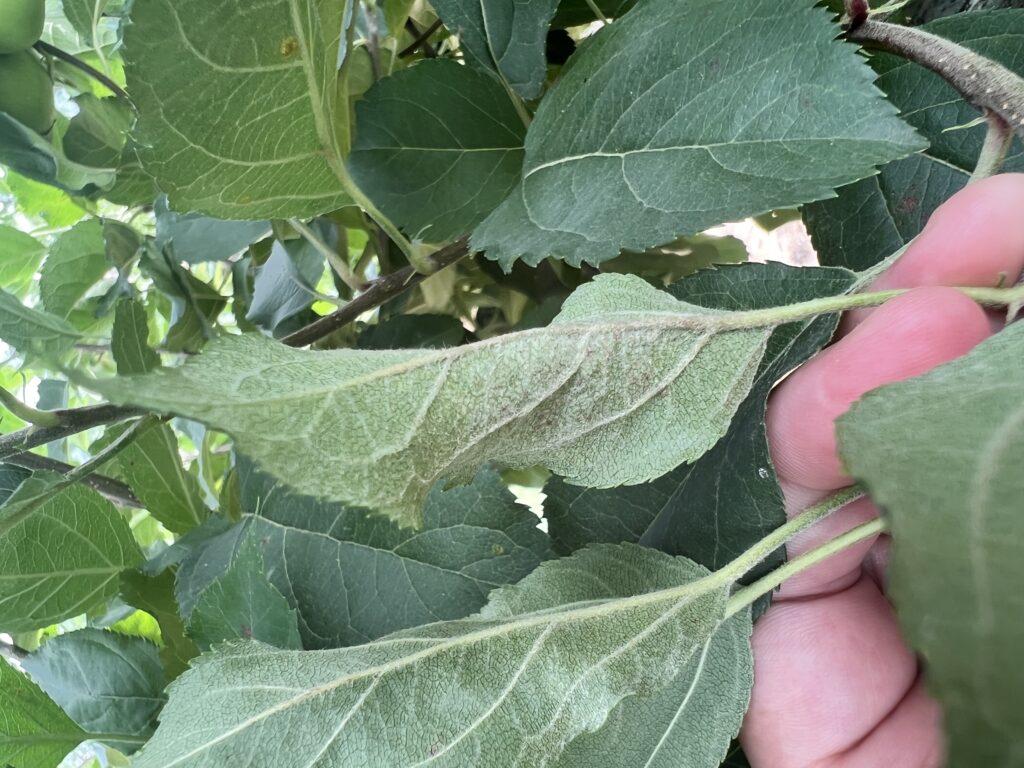 I’ve been getting a few inquiries here and there regarding how to burn out mildew control and options for controlling it. Sulfurs such as Microthiol Disperss are certainly one option for “burning out” the disease as well as protecting leaves from subsequent infections. On apple, Microthiol Disperss is labeled at a rate of 10-20 lb/A. Be aware of potential crop injury if you use this fungicide under the following conditions:

As I’ve mentioned in other posts this year, captan, ziram, nor mancozeb will provide good efficacy against powdery mildew. If PM is a concern, consider applying an older DMI (FRAC 3) fungicide such as Rally, Procure, or Topguard w/ captan. Strobilurins (FRAC 11) have also demonstrated excellent efficacy in our trials at MHCREC.

That’s it for this week. As always, feel free to reach out to me (sara_villani@ncsu.edu) with any questions or concerns!