Find this article at:
go.ncsu.edu/readext?862935
— Written By Sara Villani 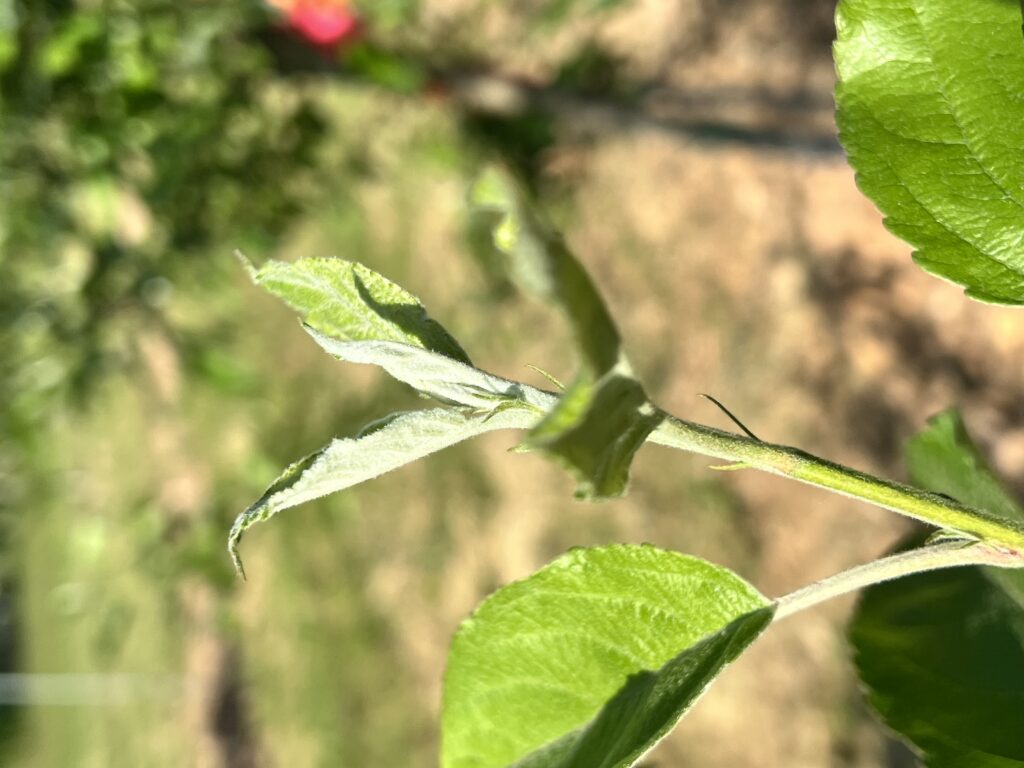 What a strange spring it has been! On many cultivars in Western NC, you can observe three phenology stages concurrently on the tree: bloom, petal fall, and 10 mm fruit. This is my 6th apple season here in NC and I cannot recall my blossom blight trials being so difficult to time. Of course that translates to several blossom blight infection events for commercial growers!
In the south, petal fall is normally the time we begin the transition from intensive “early season” disease management to more intensive “summer disease” management programs. Intensive management programs is the key take-home here as fruit loss last year reduced the number of fungicide applications being made.Since many of the Glomerella and Botryosphaeria fungi cannot distinguish between leaf and fruit tissue, this means abundant inoculum (from last year’s infected leaves) is likely still hanging out in or near the orchard.

As for apple scab, if your trees were in green tip on March 9, there have only been 7 infection events for the 2022 season. Ascospores, which cause the initial, or primary infections of apple scab had all been released by April 26th. This does not mean think you’re out of the clear. If any of the prediction infection events went unprotected, secondary infection is still possible. If you are spraying on a 7-10 day interval for Glomerella Leaf Spot/Bitter Rot, those fungicides and spray interval should have you pretty well covered. 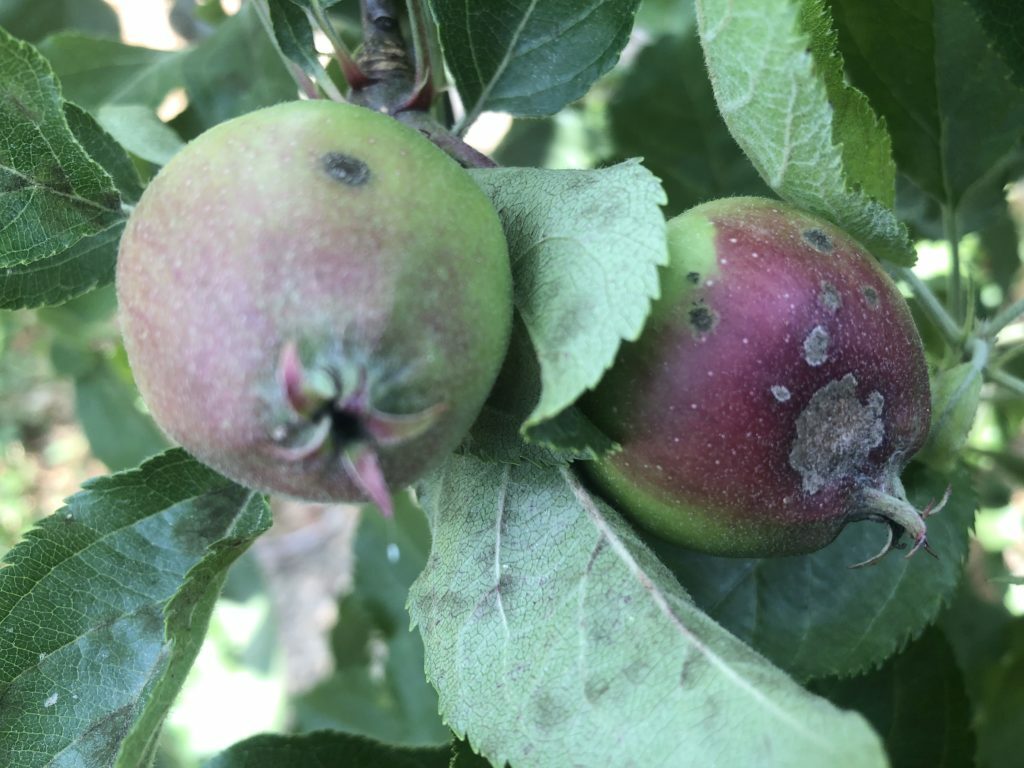 There are several fungicide options for managing apple scab, including, but not limited to mancozeb + captan (applied at half rates), the FRAC 3 (DMI) fungicides such as Inspire Super or Cevya, single active ingredient FRAC 7 (SDHI) fungicides such as Aprovia, Miravis, Excalia, and Fontelis, FRAC 11 (strobilurin) fungicides such as Flint Extra and Sovran, and several pre-mix options that contain two active ingredients (e.g. Merivon, Luna Sensation, Luna Tranquility). Certainly what you decide to apply depends on several factors including resistance history, budget, and pressure from other diseases. Here are some of my tips based on observations from our research:

Next issue on the list in Glomerella leaf spot/bitter rot. This warm weather combined with upcoming predicted rain events and high inoculum carry-over from last season could bring on an early and vicious beginning to the disease. For this week’s fungicide application I would suggest the following to combat both GLS and Bitter Rot:

Lastly, don’t forget to continue to keep up fire blight management programs. For most cultivars throughout the region, with the exception of maybe Rome Beauty, blossom blight is no longer a concern. At this point your focus should switch to shoot blight management. 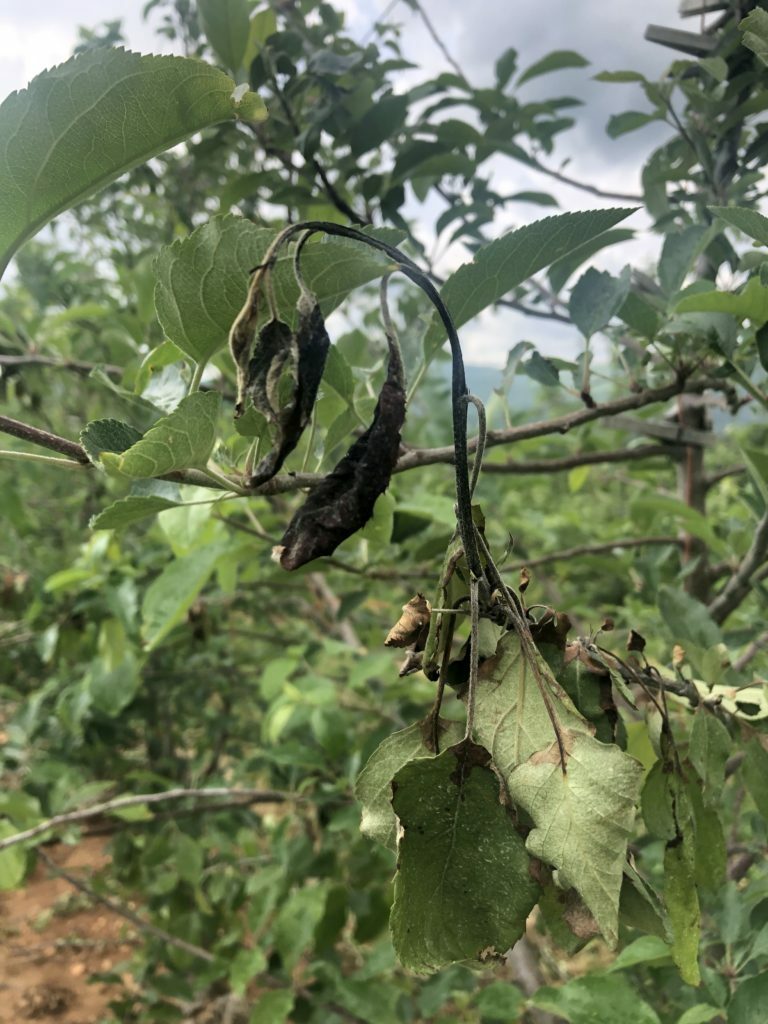 Management for the shoot blight stage of fire blight should also begin around petal fall. In order for shoot blight to occur, their must be inoculum present within or near an orchard (i.e. there must be a local inoculum source). Thus, even just a few blossom blight infections or an infected Bradford pear in front of your neighbor’s house can serve as a strong catalyst for shoot blight infection. Shoot blight is the result of infection to young, emerging leaf tissue. Injury to this susceptible leaf tissue provides the means for bacteria to invade and progress down young shoots. Insects with sucking or piercing mouth parts, or other types of wounds created from environmental conditions (e.g. hail, wind, soil abrasion, etc). Application of a plant growth regulator, prohexadione calcium (marketed as Apogee or Kudos) has demonstrated the greatest efficacy against shoot blight in commercial plantings and in research trials. The chemical retards shoot growth, thereby reducing the amount of susceptible tissue available. Prohexadione calcium also thickens xylem cell walls acting as a barrier to the bacterium. At least two applications of prohexadione calcium should be applied during the season for shoot blight management. For mature trees a 12 oz/100 gal rate is recommended at 1-3″ of shoot growth and then 14-21 days later. For trees less than 5 years old in which you are trying to fill the canopy, make applications at the same timings but at a reduced rate of 3-6 oz/100 gallons (again, I’d lean towards the higher rate, especially in trees 3rd leaf or older). Make sure to follow label guidelines on the addition of water softeners and penetrating adjuvant when making an application. Also, do not apply calcium in tank mixture with ProCa.