Spring Frost / Freeze Update: Another Round of Cold Weather 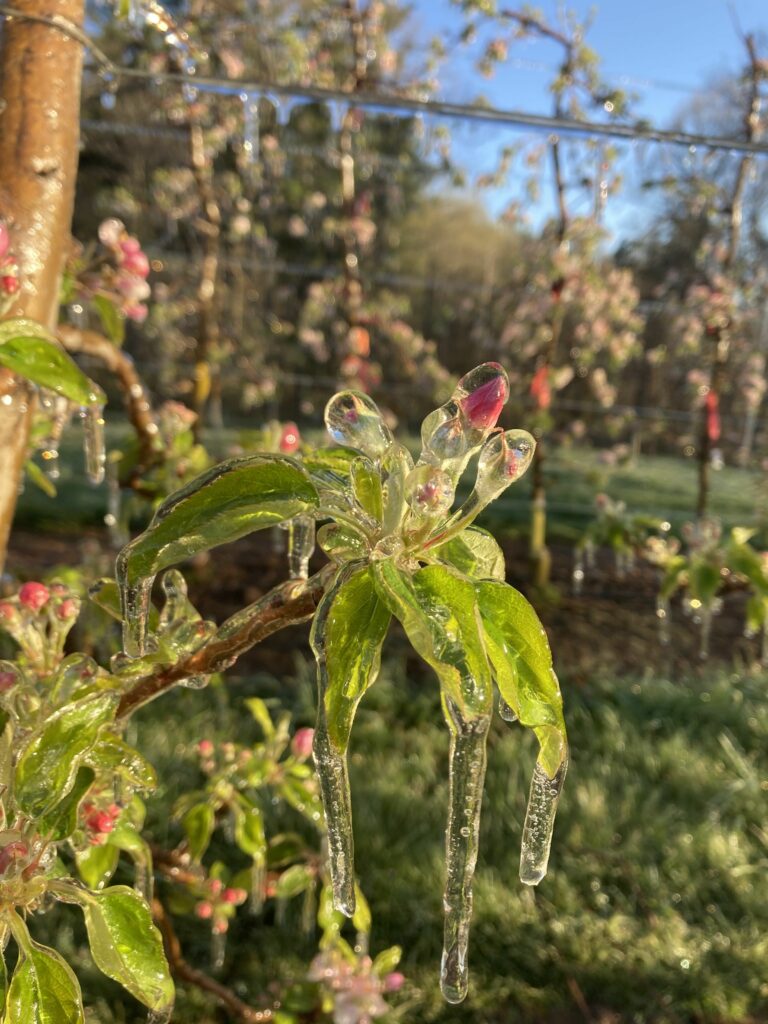 To date, at least three cold fronts have threatened the 2022 apple crop in the southeast. I sincerely hope that:  1) this is the last gasp of winter, and 2) that you all will still have potential for a full crop of apples. However, I realize that this is not the case for some operations.

The first event (March 13th) occurred at silvertip / 1st green across most cultivars. Pending upon location, temperatures generally ranged from 10 °F to 19 °F. This particular event resulted in bud mortality in some cultivars and locations. As an example, we observed 48% bud mortality in a ‘Gala’ research orchard in Mills River, NC. Despite this injury, most orchards still had potential for a full crop of apples…though there are certainly a few exceptions. The extent of this injury was visible at tight cluster/pink, since damaged blossoms had already ceased in their development and/or aborted (Fig. 1 and 2). 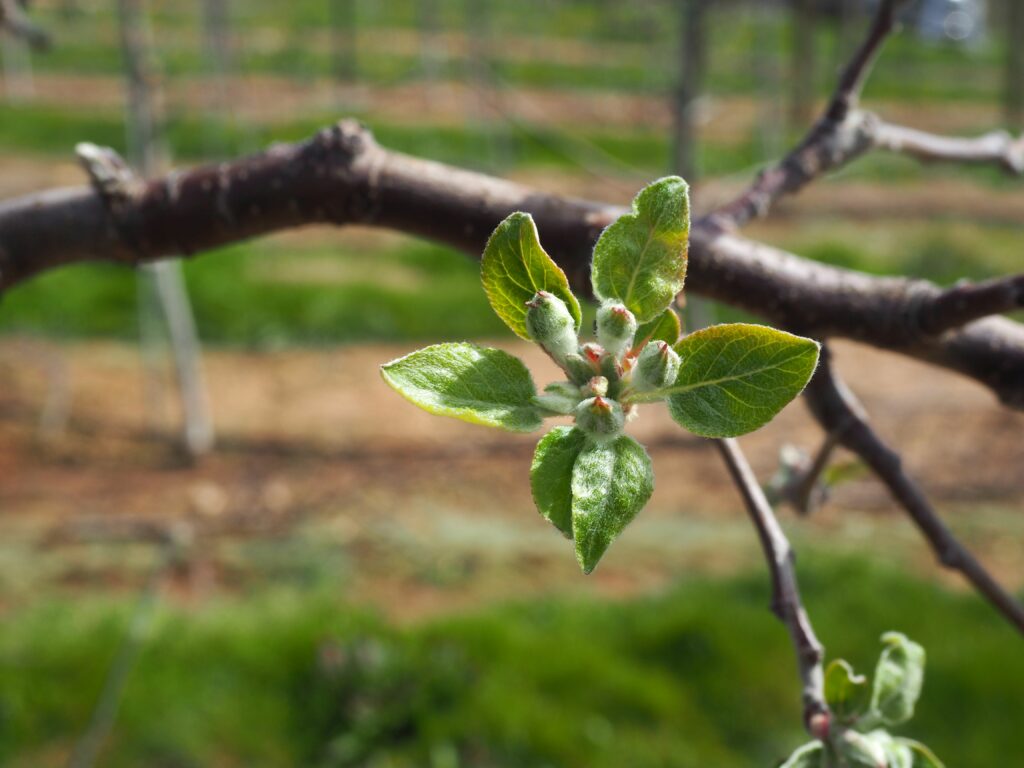 Fig. 1. Spur with a dead king blossom from the March 13th freeze. Note the cessation of king blossom development relative to the laterals. 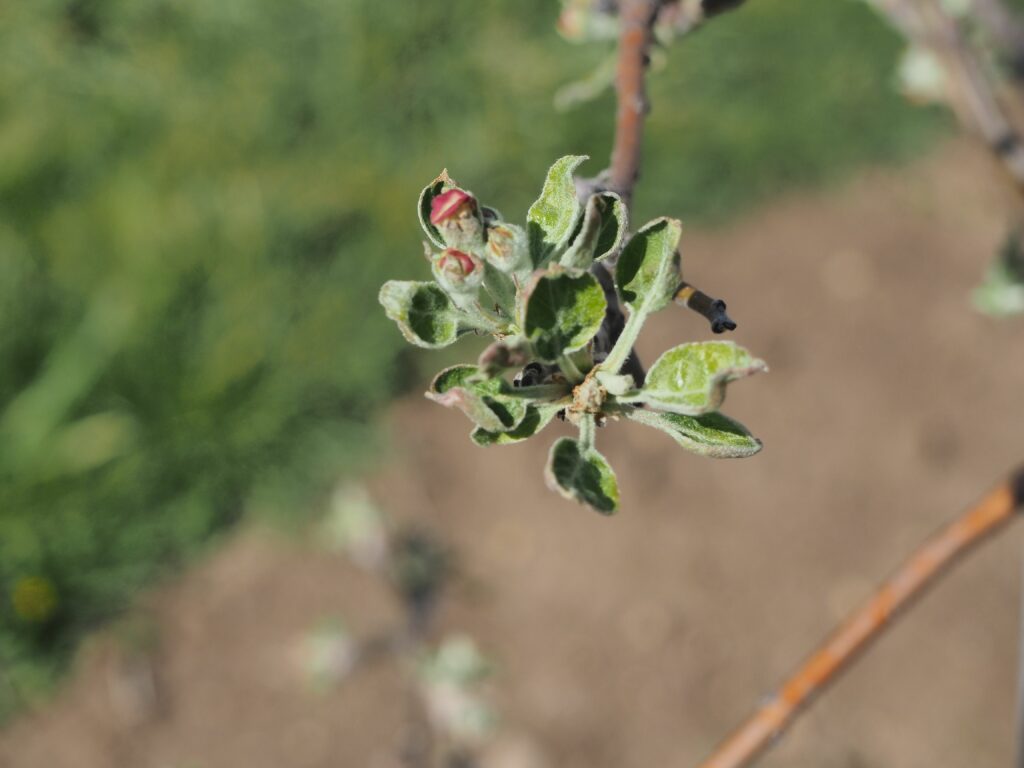 At tight cluster/pink (April 9 and 10), another cold front delivered potentially injurious low temperatures to the region. This particular front was spotty, as some locations observed sustained winds that moderated low temperatures. However, there were a few sites that got as low as 25 °F and observed injury.

The impacts of the most recent cold front (April 20) are yet to be determined, though most of my initial discussions with members of the southeastern apple industry have been optimistic. This event coincided with the bloom period for many locations; however, some cultivars/sites are at petal fall. Some locations did not drop below freezing, while others were below freezing for multiple hours. This particular front was well suited for frost protection measures, as wind speeds were low and there was an inversion (radiation frost).

The presence and severity of frost/freeze damage can be estimated by dissecting flower buds/fruit and assessing viability. However, doing this on the day of the frost event will not provide reliable results. Warm temperatures are required for visible browning of damaged tissues to occur. To ensure that observations are representative, I’d suggest waiting at least until tomorrow before scouting for injury.

Researchers at Penn State University developed a method for assessing fruit bud survival and cropping potential. While this activity is labor-intensive (especially if conducted across multiple blocks and/or varieties), obtaining an estimate of bud damage is of great value in future crop load management decisions.

This is not likely applicable to most, but is worth mentioning. If at bloom and you feel that significant damage was incurred at your orchard(s) with the April 20 frost, use of Promalin/Perlan for frost rescue is a consideration. Promalin/Perlan mimics chemical signals that are present in seeds, which can result in parthenocarpic (seedless) fruit development despite death of the embryo. Your specific situation (site, temperature observed, market, crop insurance, etc.) should be considered before employing this rescue treatment. This is not “one size fits all”.

The label for Promalin/Perlan only extends to the bloom period. Unless in the bloom period, you should not use this material for frost rescue. Caution is advised. Specifically:

If the decision to apply Promalin for frost rescue, application should ideally occur within 24 to 48 hours. While unpublished work by Steve McArtney and J.D. Obermiller suggests an even longer widow of application, weather is favorable for getting this out sooner rather than later (if applicable).