Find this article at:
go.ncsu.edu/readext?811370
— Written By Sara Villani 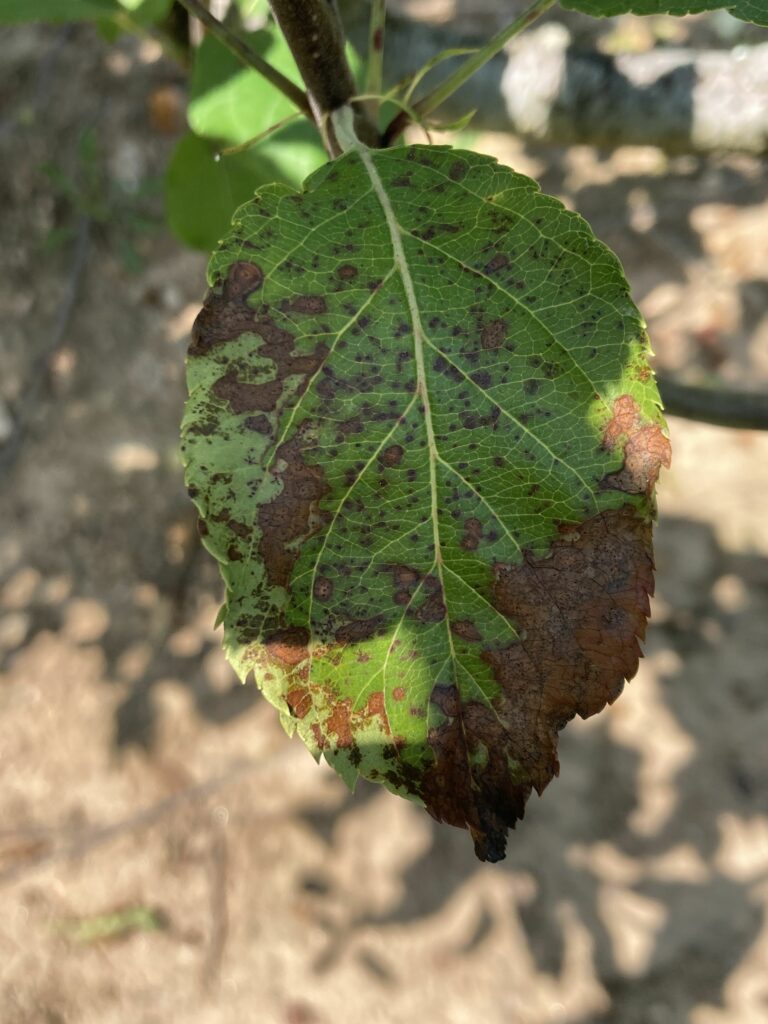 Leaf defoliation on apple trees has begun in Western North Carolina, but unfortunately it’s not quite autumn. Rather, the fungal pathogens causing Marssonina leaf blotch and Glomerella leaf spot rather enjoy the hot, humid, and wet conditions over the past few weeks throughout the area and are creating some rather spectacular symptoms on apple foliage throughout the region. Even if the spring freezes left your trees void of apples, it’s important that you maintain a fungicide program to limit inoculum buildup in the orchard and to reduce winter injury and poor fruit set next season.

The afternoon showers we’ve been experiencing throughout the region over the past few weeks means that wetting events (needed for infection and symptom development) have aligned with optimal temperatures for both the Colletotrichum fungal pathogens causing GLS and bitter rot as well as for Marssonina coronaria, the causal fungal pathogen of Marssonina leaf blotch. The trick to controlling these diseases in a year with a below-average crop is to aim for minimizing symptom development rather than keeping foliage completely absent of disease. Cultural management paradigms in late autumn or during dormancy such as flail mowing and urea applications will help to reduce levels of inoculum for the next season anywhere from  33 to 90%. Thus, low disease incidence this year plus a solid leaf management program following leaf drop should help keep disease pressure down next season. Since GLS and Marssonina may look similar I’ve compared foliar symptoms of both diseases below 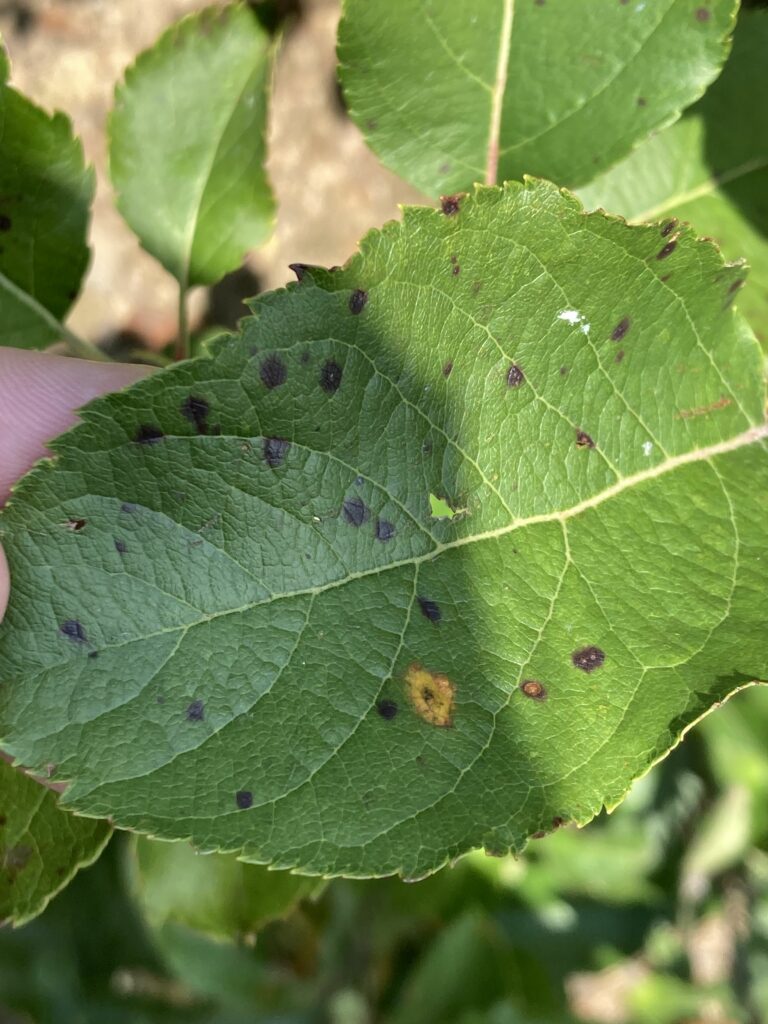 Early symptoms of MLB often appear as irregularly shaped small purple spots, but may also be red to brown colored with a purple border. 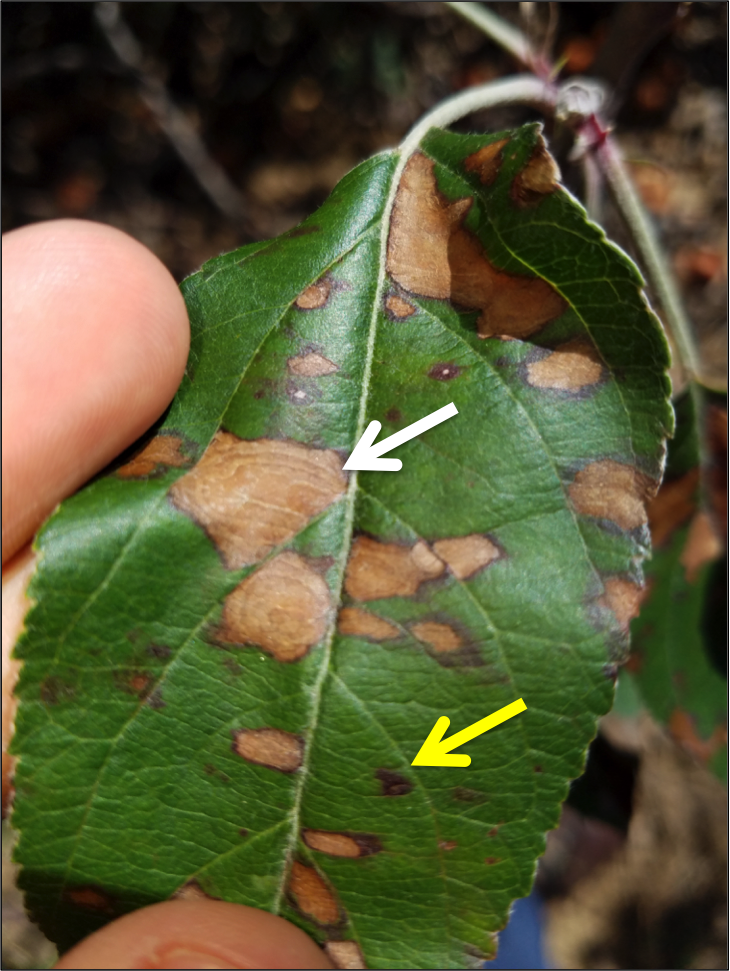 Early symptoms of GLS (yellow arrow) often appear as irregularly shaped small purple flecks. Unlike MLB, they do not tend to be as numerous or “clumped” together.

Mature symptoms of MLB often appear as brown blotches on foliage that are surrounded by light green to yellow (chlorotic) tissue. Diffuse strands of fungal structures called acervuli will form. These structures contain asexual spores called conidia that can cause additional infections on leaves and fruit throughout the season. Premature defoliation occurs when disease is severe.

Mature symptoms of GLS consist of irregularly shaped brown lesions, often with concentric growth rings. Perithecia, fungal structures that also contain spores, form on leaves (usually following defoliation) and can cause additional infections throughout the season. Similar to MLB, leaves will also become chlorotic, although the “green islands”, or spots of green tend to be more prominent with MLB. Similar to MLB, premature defoliation often occurs on poorly managed trees.

In addition to difference in symptom development, identifying the cultivar in which symptoms occur may also assist in differentiating between the two diseases. GLS symptoms are most commonly observed in Granny Smith or in cultivars with a Golden Delicious parent. While MLB can occur most apple cultivars that I am aware of, I’ve commonly observed the disease in Rome Beauty, Honeycrisp, and several cider apple cultivars.

Fungicides Game Plan for this Week