Find this article at:
go.ncsu.edu/readext?801231
— Written By Sara Villani and last updated by Stephen Schoof 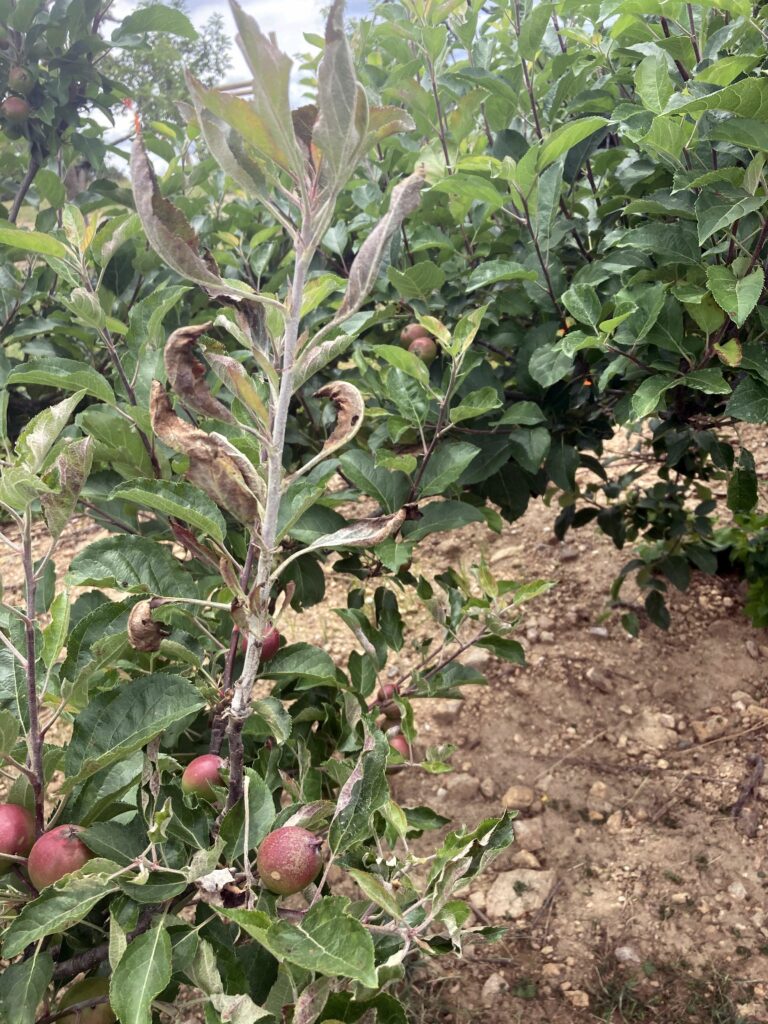 It is not very often a photo of powdery mildew is the highlight picture in my blog post during the first week of June. However, in my Rome Beauty block at MHCREC, infections have been fairly severe in comparison to previous years. My my colleague, Professor Emeritus Keith Yoder (Virginia Tech), always warned about fruit infections by the powdery mildew pathogen, however this is my first year actually observing those symptoms-a russett, net-like appearance on the surface of the fruit: 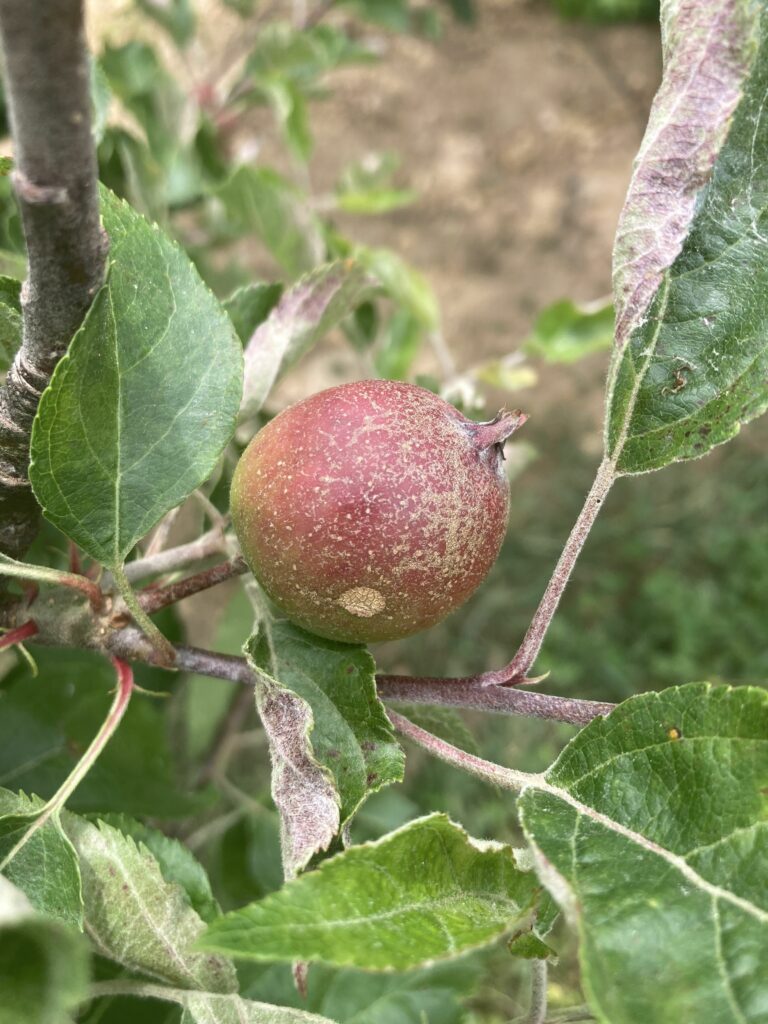 Likely, the main reason powdery mildew has come on strong this year is because of the dry weather combined with our recent temperature surge, as well as our consistent cool/cold winter temperatures. Unlike most other plant pathogens that require water for infection to occur, powdery mildew needs it dry. This is why the disease is a primary focus when developing fungicide programs in arid apple production regions in Washington state, but normally less of a concern here in the S.E. The powdery mildew fungus (Podosphaeria leucotricha) overwinters in terminal buds and as shoot emerge in the spring, they become colonized with white/silvery colored spores (primary mildew) as can be seen in the top picture. In particularly cold winters (-11F or less) the pathogen may be killed, which is another reason why the disease is not usually considered a major issue in the Northeast or North Central production regions. Secondary infections occur conidia (spores) from primary infections land on young, succulent tissue (see below). As leaves mature they become more resistant to infection by the mildew pathogen-an observation called “ontogenetic resistance”. 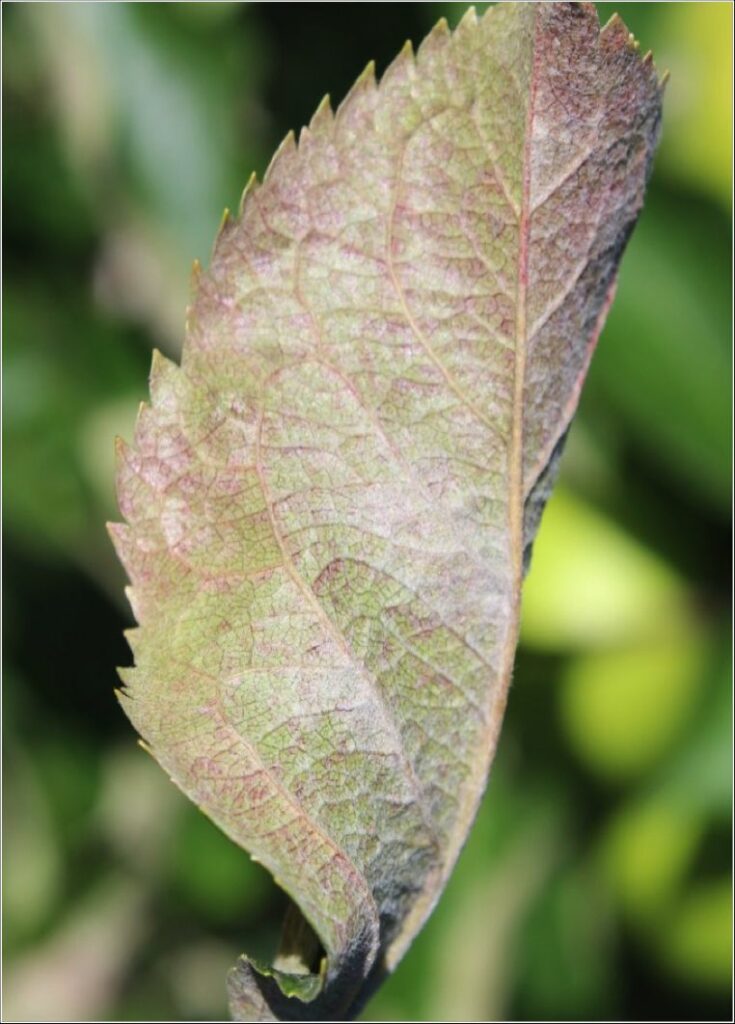 In years with a reduced fruit set, keeping an eye out for powdery mildew infections should be a priority. There is some resistance in populations P. leucotricha to FRAC 3 fungicides (e.g. Rally, Procure, Indar) and differences in sensitivity to active ingredients within this fungicide class have been observed. Below is a chart displaying the efficacy of several fungicides for the control of apple powdery mildew. Keep in mind this is PERCENT CONTROL (not incidence). Multi-site protectants such as captan and mancozeb provide little control against mildew so if you are relying on these materials for your disease program this, you may want to consider a fungicide with a greater punch. Sulfur is another alternative but take care when applying when temps are in the mid 80s or greater. 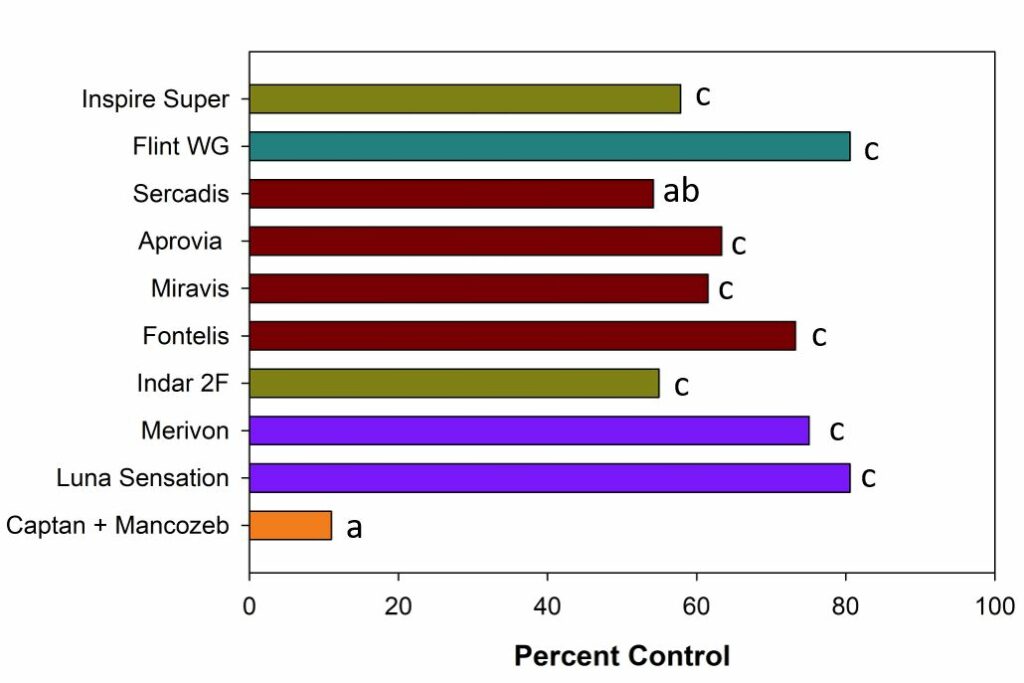 As far as maintenance fungicide programs this week, I’d continue on the same applications intervals as described in previous posts. For any cultivars harvested in mid-August or earlier you are likely approaching the 77-day PHI for mancozeb (if you haven’t already exceeded your annual limit of sprays). The forecast is calling for rain this evening and tomorrow (Thurs) so consider an application of a strobilurin (FRAC 11) containing fungicide such as Merivon or Luna Sensation, or Flint. Next week I’ll provide a more in-depth game plan for flyspeck/sooty blotch since I’ve had a few questions come up about what to add to the tank mix with captan for control. According to models, if you have applied a fungicide with a respectable level of efficacy against fssb within the past 14 days, your risk of infection is “moderate” this week.