Find this article at:
go.ncsu.edu/readext?803625
— Written By Sara Villani and last updated by Stephen Schoof 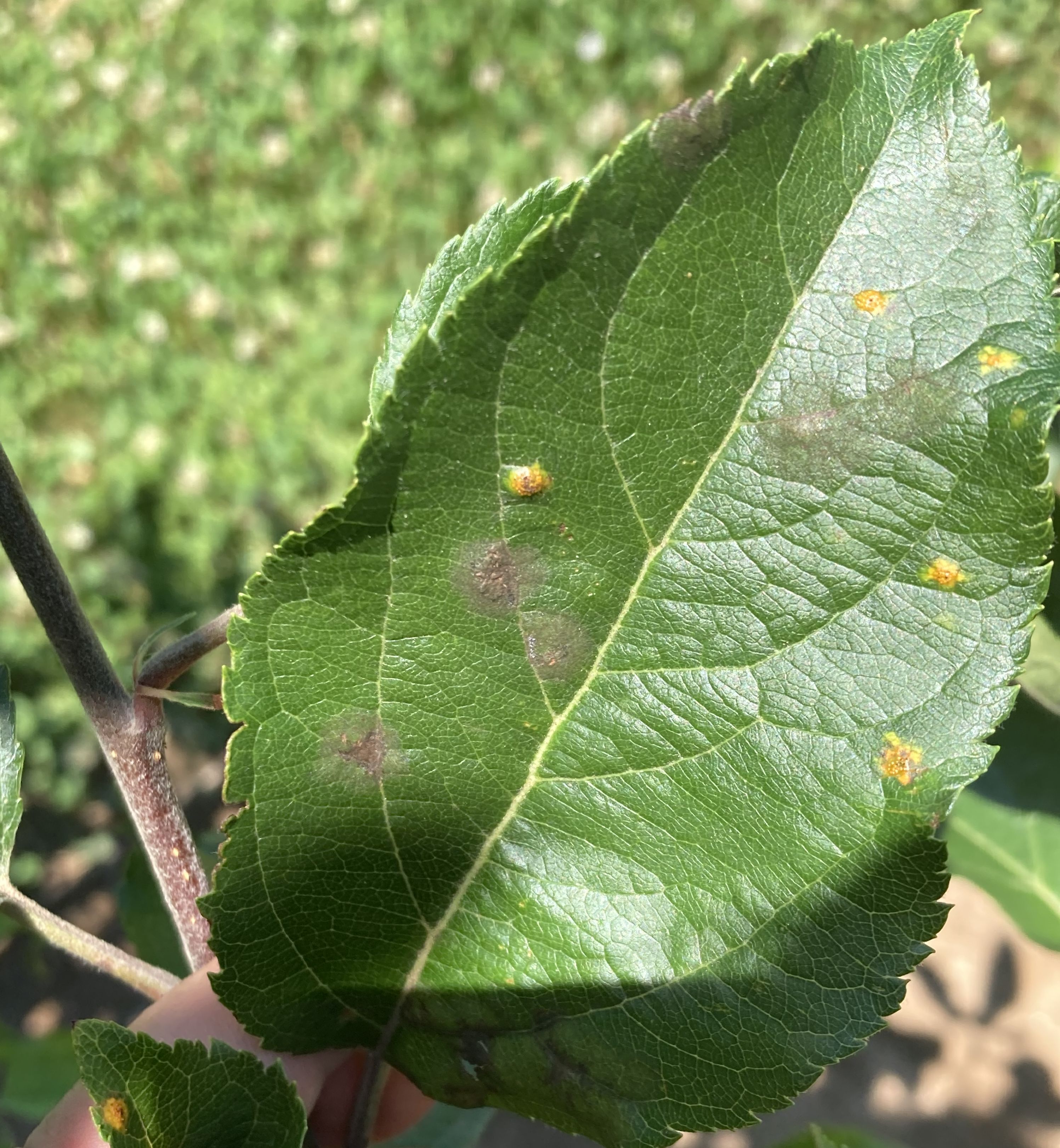 This week a few reminders about scab and rust management-I’ve had several correspondences about both. Let’s deal with the disease that can still give you nightmares, but that is still manageable: Apple Scab. Despite the heat, I’ve been observing actively sporulating scab lesions in our ‘Rome Beauty’ research orchard in Mills River. In addition, we’ve had photos of leaves with “pinpoint scab” sent our way and even saw small pinpoint lesions on the back of Honeycrisp leaves-a cultivar that is considered pretty resistant to scab infections: 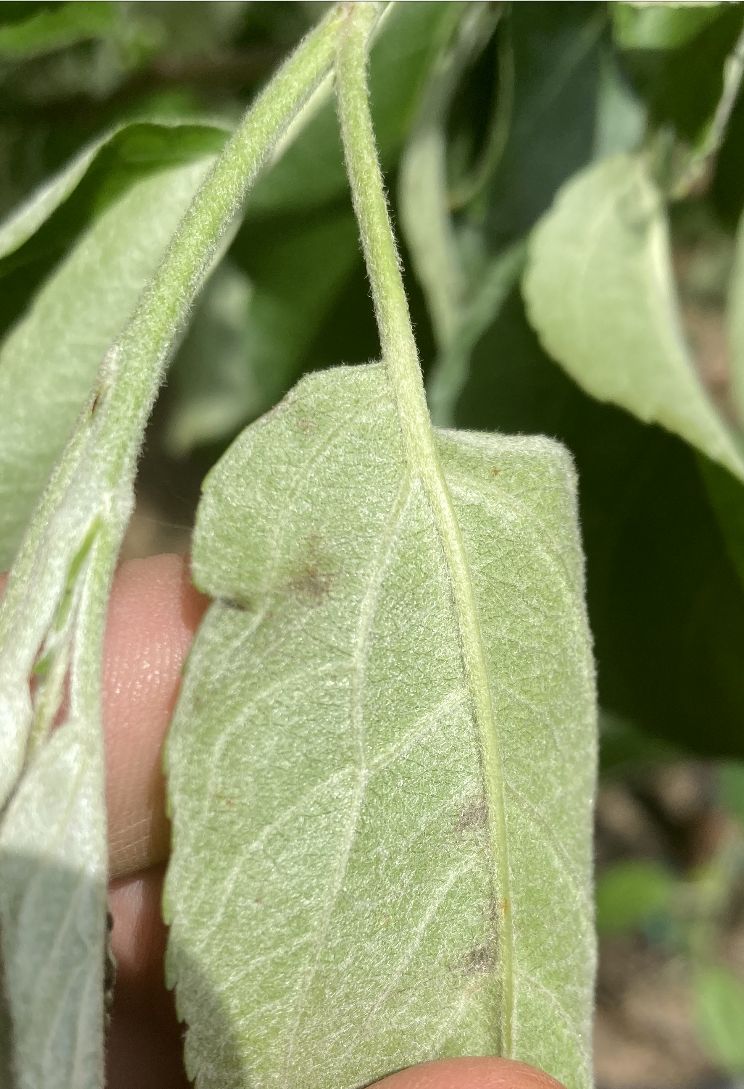 It’s important to remember that these pinpoint lesions, which look almost like a water-soak mark on the back of leaves, can still produce asexual spores called conidia and infect leaves and developing fruit. Unlike for bitter rot or GLS, there are a number of highly efficacious scab fungicides on the market. DMI fungicides (e.g. Inspire Super, Cevya), SDHI single A.I. products (e.g. Aprovia and Miravis), SDHI/strobilurin pre-mix products (e.g. Luna Sensation, Merivon), and strobilurin fungicides (e.g. Flint Extra), should all provide excellent protection (and moderate kick-back activity) against scab in your block. Captan certainly provides decent control as well but will need to be applied more frequently and it will have little to no control against powdery mildew.

Cedar apple rust (or an associated rust) has also received a bit of attention over the past week or two. Unlike most other apple diseases (e.g. scab, mildew, bitter rot), the causal fungal pathogen of CAR only completes one lifecycle on apple each year. Another way to look at it-spores of the rust pathogen that develop on apple will not reinfect apple. Rather, CAR requires two hosts to complete its lifecycle-cedars/junipers and apple. Starting at the tight cluster stage, spores from cedars will infect apples. Early symptoms of CAR on apple will appear on the top surface of leaves and will be of an orange to yellow to sometimes red shade. By mid-late July (in NC) long tendrils (aecia) will appear coming from the lesion on the backside of the leaf (see below). The aecia release the spores that will go on to infect the cedar host. 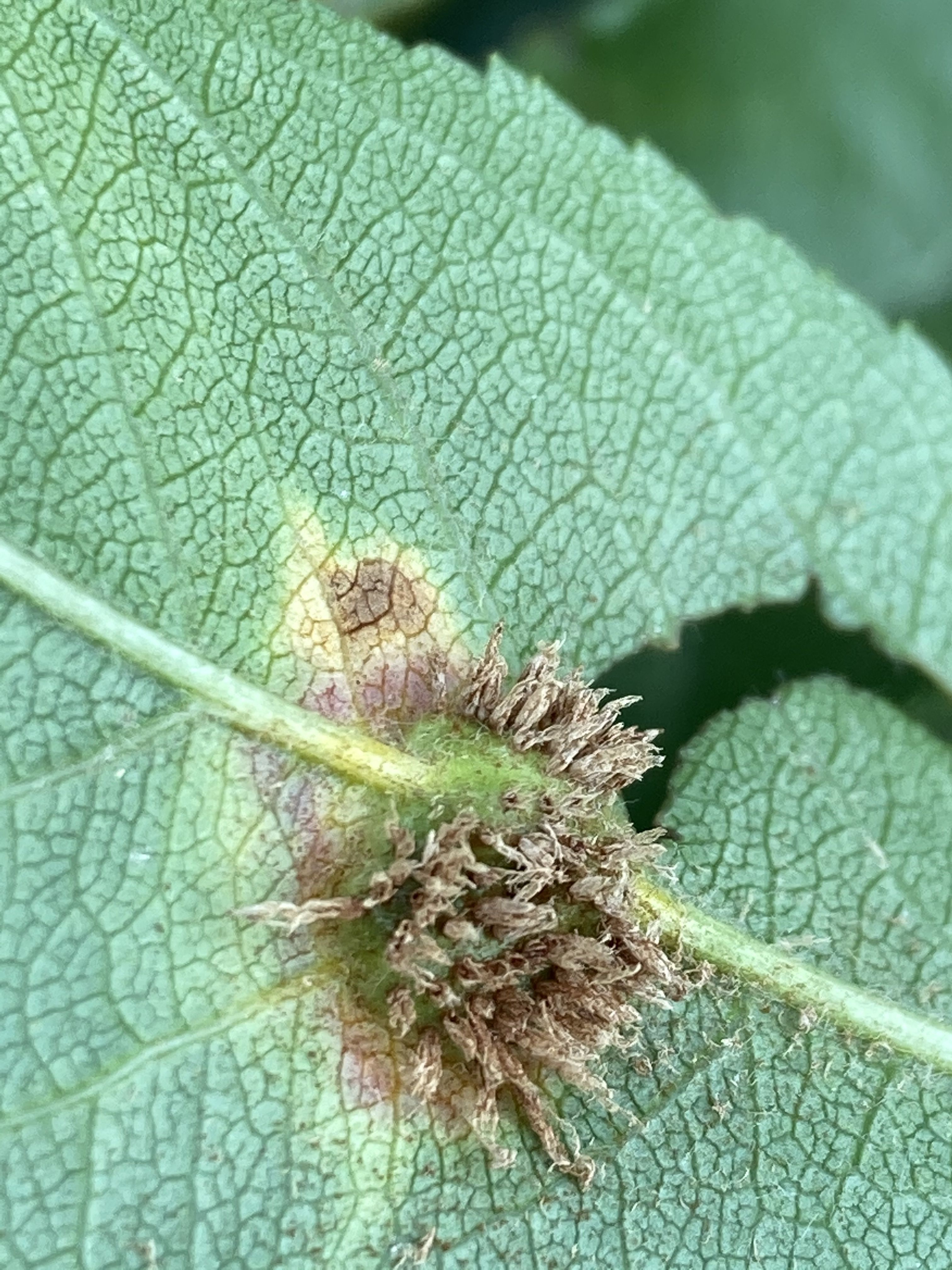 Since spores produced from lesions on apple leaves and fruit are unable to reinfect apple, once symptoms appear there’s not much you can do. Depending on environmental conditions, symptoms may appear over the course of a few weeks (or month). DMI (FRAC 3) fungicides such as Rally 40WSP or Procure 480 may suppress symptom development or reduce severity or new symptoms if applied when symptoms of CAR first appear.

Lastly this week, I wanted to address questions regarding the addition of ProPhyt or another Phos. Acid fungicide in tank mixture with captan to manage summer diseases. As a brief reminder, in many pathosystems (host + pathogen) the incorporation of ProPhyt into tank mixtures with captan was observed to enhance disease control. From 2016 to 2019, we evaluated the efficacy of captan with and without 3 to 4 pt/A of ProPhyt for the management of Glomerella leaf spot. The incidence of GLS in ‘Gala’ following these applications is below. In 2016, no significant differences in GLS incidence were observed between treatments, in 2017, the captan/ProPhyt combo resulted in significantly less GLS compared to captan applied alone, and in both 2018 and 2019, captan applied alone resulted in significantly less GLS compared to captan + ProPhyt. It’s important to note that in the first two years of this trial treatments were applied on a 14 day interval. In the final two years treatments were applied on a 7 to 10 day interval. What we can conclude is that ProPhyt sometimes enhanced the activity of captan or resulted in greater GLS control, but only when applied on extended intervals. 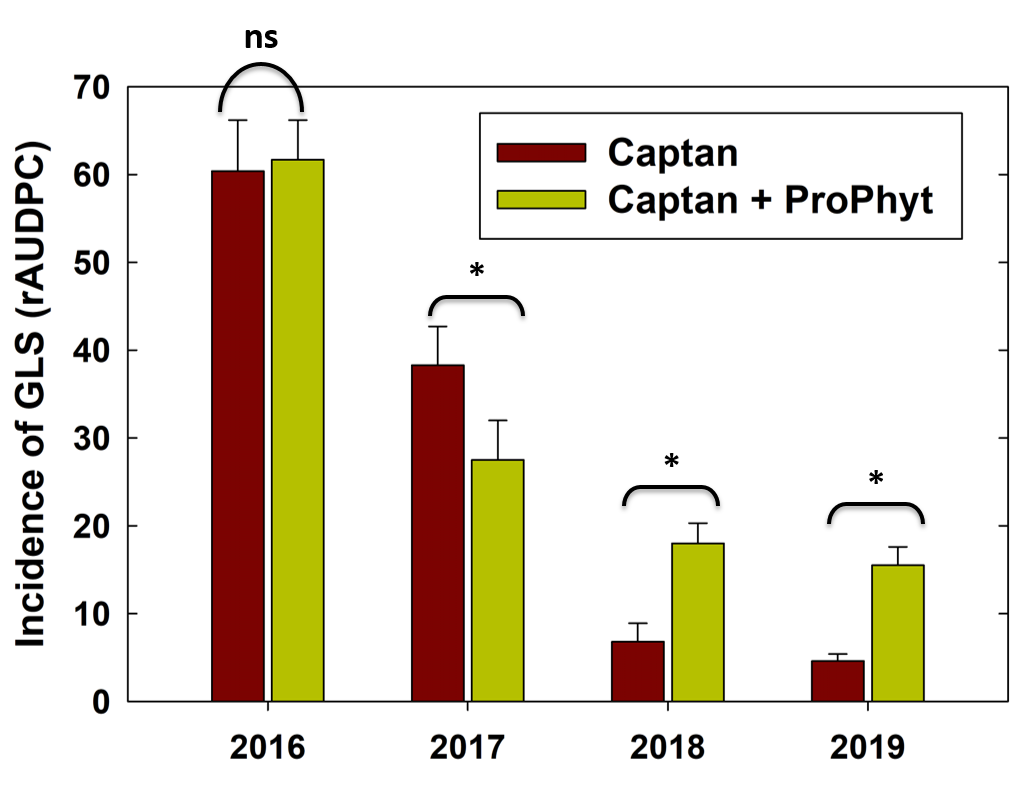 Since captan does break down relatively rapidly at high pH, we did wonder if the addition of ProPhyt (Phos acid) enhanced captan activity by lowering the pH of the spray water. To test this hypothesis, we adjusted the pH of  spray water in which captan was suspended in to the following levels: pH = 5.8 (avg water + captan pH at MHCREC without pH adjustment), and pH =4.0, 5.5, 6.1 (pH of spray water when ProPhyt is added), 7, and 9.7. Unless noted, applications were applied on a 14 day interval. 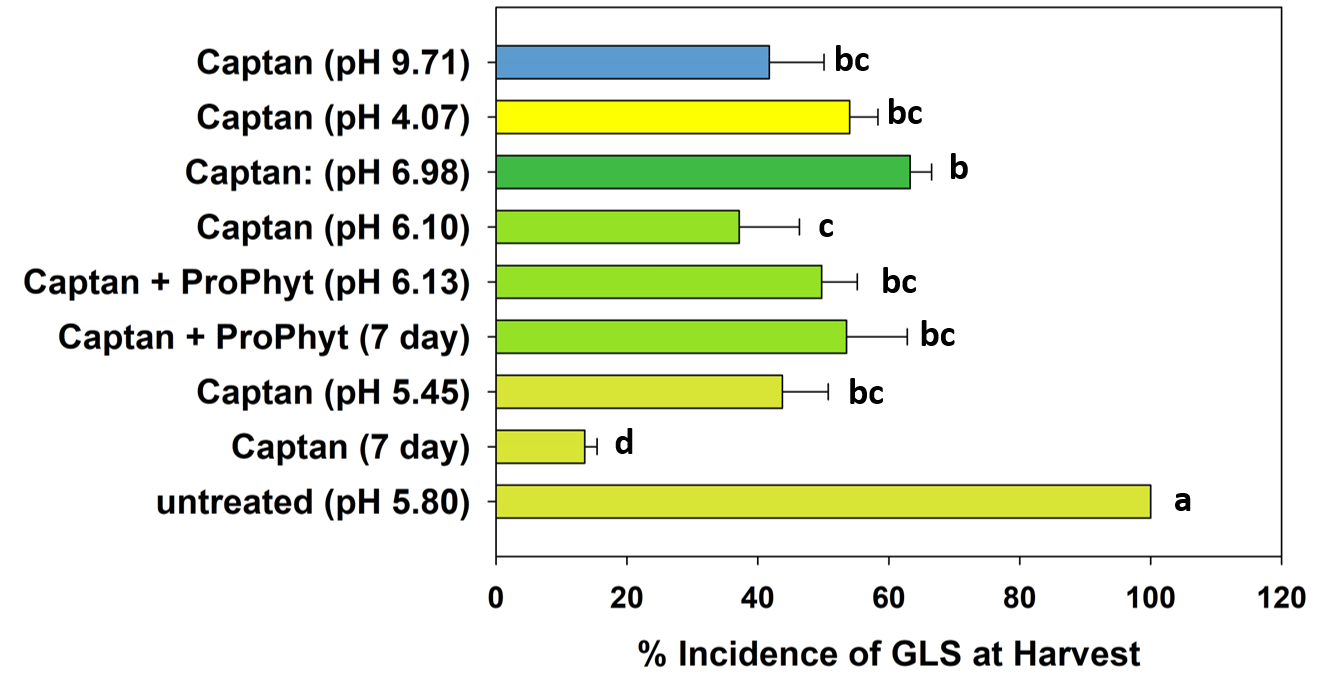 In general, pH had negligible affect on captan efficacy against GLS incidence at harvest. Captan, applied at a 3/4 rate provided a level of control significantly greater than that of any other treatment. Keep in mind that our well water used for applications had a low pH prior to making adjustments. Results could be different if your water is well above neutral.

In regards to what to spray this week-here in Western NC the forecast looks fairly dry. I would continue with captan or captan + ziram applications for summer disease management. Consider adding a single site fungicide if your target diseases include scab, mildew, or flyspeck/sooty blotch.