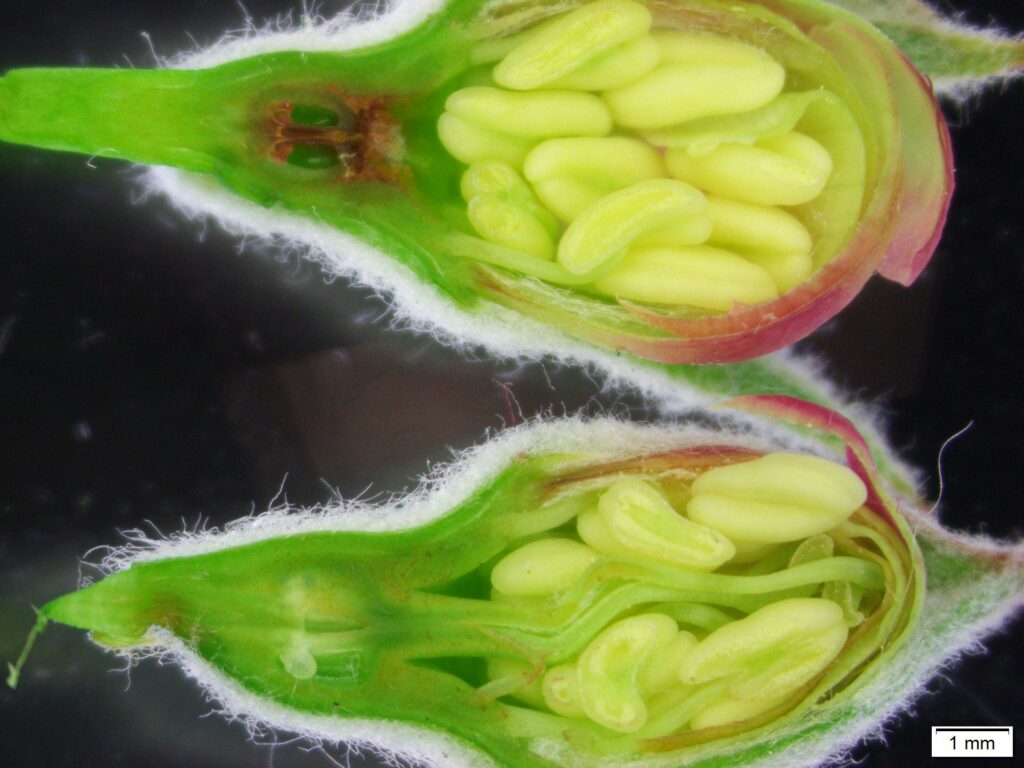 Multiple cold nights in early April caused flower bud mortality across several apple production regions including the southeast (NC, SC, and GA), mid-Atlantic (VA) and Midwest (MI). In the southeast, frost/freeze events occurred at pink bud stage to full bloom pending upon location and cultivar. The exception was Rome, which was at a much earlier stage of development. 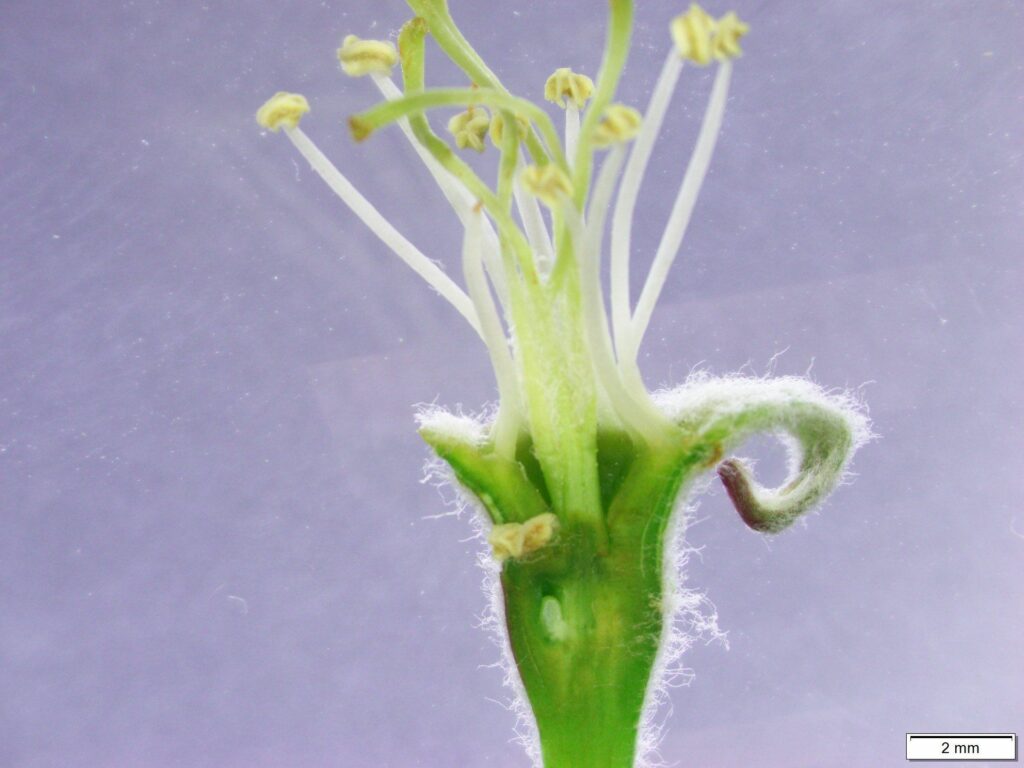 Gala apple blossom with no visible injury to the pistil. This would be categorized as a viable blossom. Photo by Tom Kon, NC State. 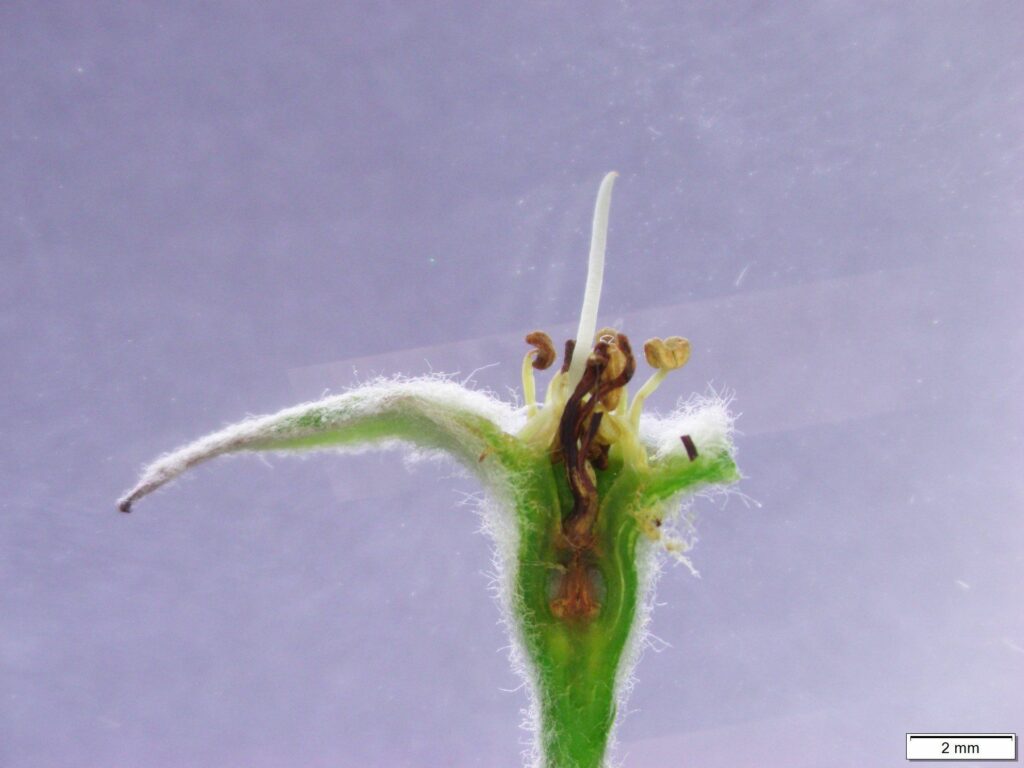 Apple blossom with visible injury to the pistil. Any blossoms exhibiting browning/discoloration of the pistil was categorized as “dead”. Photo by Tom Kon, NC State.

This evaluation was conducted following the potential freeze events on April 2 and 3, 2021. In general, the presence and severity of frost/freeze damage was evaluated using a method for assessing fruit bud survival. At each site, ~10 representative limbs from at least varieties (Pink Lady, Gala, Golden Delicious, and Rome) were collected and viability of all blossoms was assessed. Click on tables of interest to enlarge.

Bud mortality ranged widely (1% to 99%), pending upon site and cultivar. While data from most sites indicated potential for a full to partial crop of functional flowers, some sites/cultivars suggested likelihood of a crop failure. In general, higher levels of mortality were observed with Pink Lady (early blooming) and Fuji (cold tender) when compared to Gala. Many sites observed temperatures in the mid to low 20’s for an extended period. Outside of this data, I received multiple reports that Ginger Gold, Mutsu, and Red Delicious suffered significant damage in many locations. In some cases, crop failures were reported.

Additional cold weather is in the forecast this week, as some sites are expected to have one or two more days with temperatures near freezing.

Still have potential for a crop? A few thoughts on thinning.

Most sites are approaching or beyond petal fall. Weather during bloom was generally favorable for pollinator activity. However, due to previous and potential cold injury, initial fruit set is very unsettled. Thinning is a challenging management decision every year, and thinning after a series of freeze events is certainly no exception.

Patience and attention to detail will be critical when thinning in 2021. Delay chemical thinning until there is sufficient evidence that fruit is actively growing. Growing fruit is setting fruit – measuring fruit growth over time will help to determine if thinning is justified. Early and aggressive thinning strategies may be inappropriate.

Apples are easier to thin after cold injury, due to potential damage to seeds and spur leaf tissue. Assessing this injury will be critical prior to applying any thinners.

Fruit with damaged or missing seeds is easy-to-thin, which can increase risk of over-thinning. Spur leaves play a very important role in fruit set and are the primary source of carbohydrates for fruitlets at this time. In addition, absorption of thinning chemicals by damaged leaves is likely greater than when compared to undamaged leaves. In short, I would exercise caution when thinning trees that exhibit injury to seeds and spur leaf tissue. Reduce rates or switch to less aggressive chemistries where appropriate. In some cases, deferring thinning decisions to a later timing or not thinning at all may be prudent.

Given the forecast, delaying thinning until favorable temperatures (>68 °F) are observed is a valid consideration. Even without the concerning low temperatures in the forecast, any thinners applied this week would not be very effective due to limited activity of chemical thinners with cool weather.