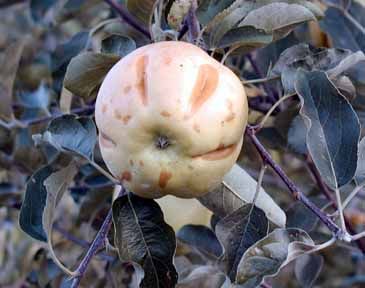 Sub-lethal freeze injury to a ‘Ginger Gold’ apple. Developing apples that have been exposed to near-lethal temperatures will sometimes take on a ribbed “pumpkin” appearance, the result of damage to tissues around the vascular bundles. Image courtesy of Rob Crassweller (Penn State University).

Apple growers across the Eastern and Midwestern US are bracing for an unusually late cold front (polar vortex). Low temperatures in the forecast are near or below critical temperatures in many southeastern apple production regions. Nearly all cultivars are in the post bloom window and some varieties have ~18 mm fruit.

In my short career, I have not personally observed freeze damage this late in the season. In an exchange with colleagues who have experience in fruit production in other regions (ME, NY, and PA), an excellent discussion regarding the anticipated freeze event occurred. Here are a few key points from this discussion:

Comments in this discussion were provided by Jim Schupp and Rob Crassweller, Penn State University.