Find this article at:
go.ncsu.edu/readext?680828
— Written By Sara Villani 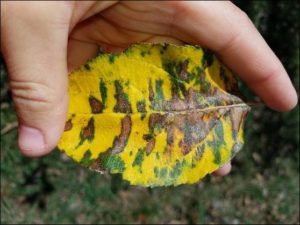 The unseasonably cool temperatures throughout Western NC has put apple tree development in a bit of a holding pattern. Fortunately, this should also slow down Glomerella leaf spot for the time being as well since the probability of infection is believed to drastically be reduced when temperatures are below 59 degrees (F). That said, models are not perfect so continue to make calendar-based fungicide applications that include at least one multi-site protectant fungicide (preferably mancozeb) combined with a single-site fungicide (e.g. FRAC 3-Inspire Super, Cevya, Indar 2F) to help with control of rust and powdery mildew. If you’ve had a significant amount of black rot, frog eye leaf spot, or Alternaria leaf spot, you may want to consider adding thiophanate-methyl, captan, or perhaps a strobilurin to your tank mixture this week. However, I’d still wait to add stroby containing products until conditions become more conducive to infection by the GLS fungus.

I hate to think about you quarantining at home, however, without any new apple disease material to read. Therefore, to assuage your boredom, I thought I’d share a few questions we received from stakeholders and some of the results from research we undertook to answer those questions from last field season. All of this research was really defined by you the stakeholders and your excellent questions. In addition to weekly disease updates (or in lieu if there’s nothing to report on) my plan is post Research Recaps (from either myself or guest plant pathologists) throughout the season. Fine print though: Some of this research has not yet been repeated which makes it nearly impossible to make clear conclusions and set official management recommendations.

Question 1: Do I really need to include ProPhyt with captan during summer cover sprays for GLS and bitter rot?

Even before I arrived in NC, I had learned at meetings about the benefits of adding a phosphorous acid fungicide, such as ProPhyt, when applying captan for control of GLS and bitter rot. Having a skeptical personality and knowing how high disease pressure was in NC, I had to see these effects for myself. So, from 2016-2019 we compared Captan (80WDG or 4L) programs with and without ProPhyt in our ‘Gala’ GLS/Bitter Rot Research Orchard at MHCREC in Mills, River. Captan was applied at 3/4 of a full rate when mixed with Prophyt (at 4 pt/A) and at a full rate when ProPhyt was not included in the tank mixture. In 2019, captan was applied at 3/4 rate regardless if ProPhyt was included. In 2016 and 2017, applications were made on a 14 day interval, whereas in 2018 and 2019 fungicides were applied ever 7 to 10 days. 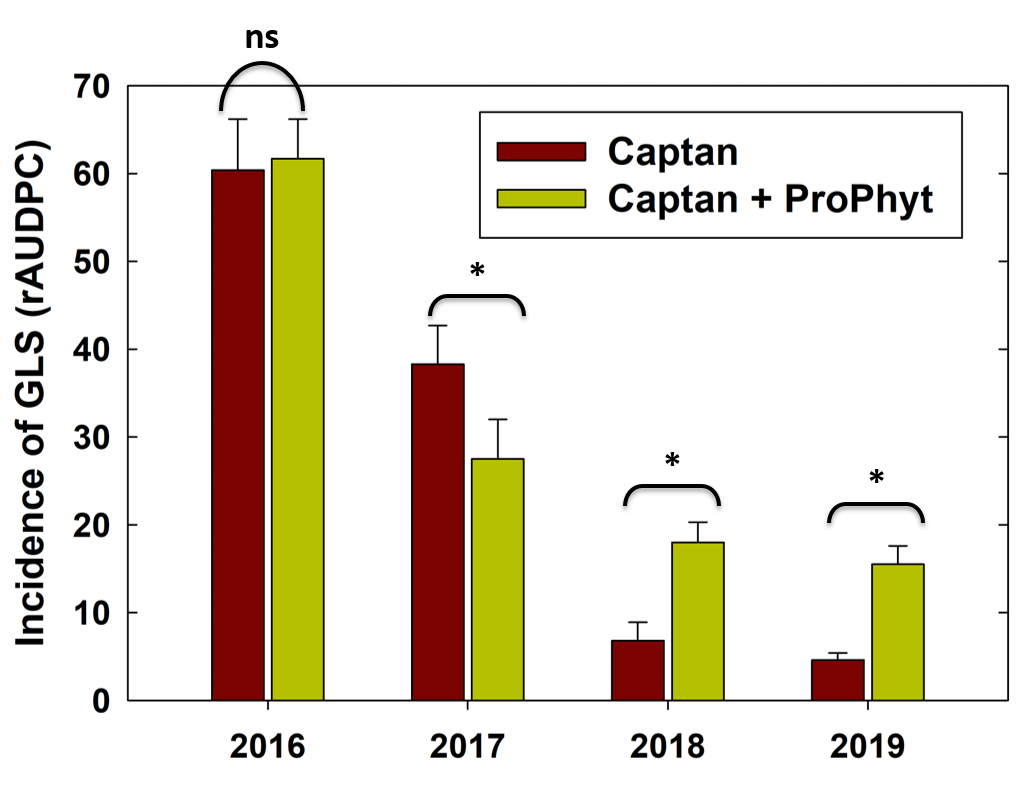 We found that compared to captan alone, the combination of captan + ProPhyt significantly reduced GLS incidence in one year (2017), resulted in significantly higher GLS incidence in two years (2018 and 2019), and that it didn’t have a positive or negative effect on GLS control in one year (2016). These observations were somewhat puzzling, considering I had colleagues in other states performing improved management of summer rots (and diseases on other crops) when including a phos. acid fungicide with captan. To begin to explain our variability of results at MHCREC, we set out in 2019 to better wrap our brain around the phos. acid conundrum with captan, and to elucidate some of the mechanisms behind the occasional benefit we observe when combining the two agrichemicals.

Feedback and concerns from growers at 2018/2019 winter meetings helped to shape some of our more specific captan/phos. acid applied research questions:

1. How does the pH of your spray tank mixture (water) affect the efficacy of captan against GLS and bitter rot?

2. Can application intervals be extended by adjusting the pH?

Q1: How does the pH of your spray tank mixture (water) affect the efficacy of captan against GLS and bitter rot?

If you were half awake at any winter meetings in 2018/19 I spoke quite a bit about the warning on captan labels about potential reductions in captan efficacy when applying under alkaline conditions:

Experiments have shown the half life of captan to be approximately 10 minutes when spray water pH becomes too high (compared to approx. 10 hours under slightly acidic conditions). Considering this nugget of knowledge, we postulated that ProPhyt may sometimes enhance captan activity because it serves as an acidifying agent.

To answer test this theory, in 2019 we conducted a fungicide trial at our ‘Gala’/M.7 research orchard at MHCREC in Mills River. For all treatments (except “untreated”), Captan was applied at 3/4 rate (i.e. 3.75 lb/A for Captan 80WDG) and the spray water pH was adjusted with either Quest (lower pH) or hydrated lime (raise pH). Captan without pH adjustment and Captan + ProPhyt (4 pt/A) were included for comparison. Fungicides were applied every 14 days.  We aimed to achieve the following pH values following adjustment:

We also included a treatment in which the pH was equivalent to that of Captan + ProPHyt. Actual average pH that we did achieve are listed in parentheses in the graph below: 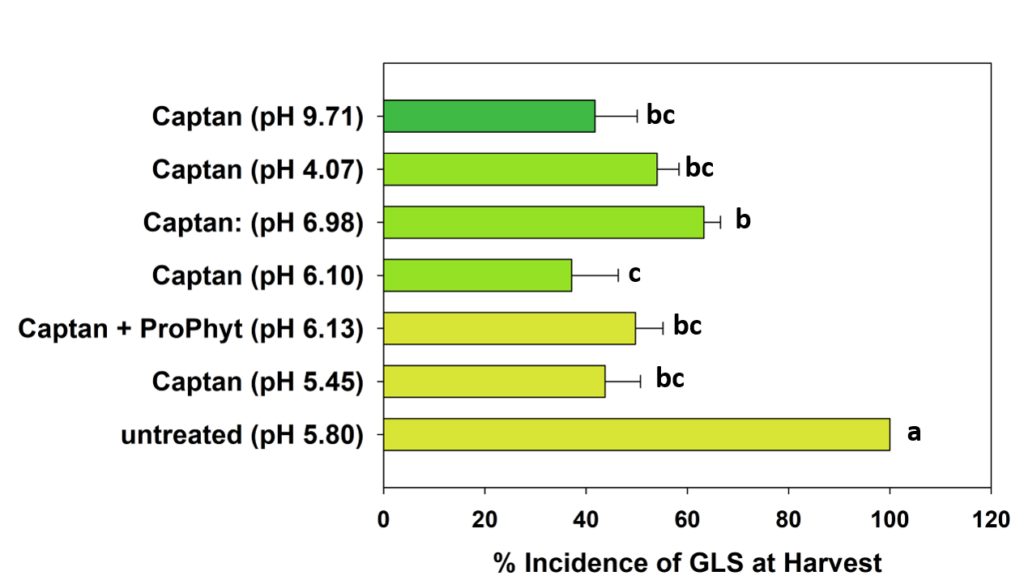 Well, as you can see by the graph above, regardless of pH, captan significantly reduced the incidence of GLS compared to the untreated program when applied on a 14-day interval. While there may have been slight numerical differences in control, we saw no significant differences in GLS reduction across the different pH conditions. Even more surprising to us was that the program of captan applied at the lowest pH (most acidic) had among the highest levels of disease in the trial. One thing to point out here: The low pH of our spray water and our captan (non-adjusted) treatment. Going back to our first graph that showed four years of captan + Prophyt data, we suspect that captan outperformed captan + Prophyt in 2018 and 2019 because our spray water pH was so low that the addition of ProPhyt actually made it more alkaline.

Q2: Can application intervals be extended by adjusting the pH?

This question arose based on the concern of maxing out seasonal captan limits (40 lb/year of Captan 80WDG) by early September. It also stood to reason that if captan breaks down faster under alkaline conditions then perhaps residues would last longer. For this trial we evaluated the following programs (for all trts captan was applied at 3/4 rate like before:

A few preliminary take-home observations and thoughts regarding data from this second trial. First, there was a HUGE difference in GLS incidence when captan was applied on 7 vs 14 day intervals. This difference could certainly be associated with residue retention following rainfall. We have purchased a GC system to measure the residues from leaves (and fruit) and are planning on embarking on a study to better model captan residues in relation to environmental factors such precipitation, leaf wetting hours, UV radiation, and temperature to hopefully provide you a more informed plan for captan applications. Secondly, there seemed to be no difference in GLS control when captan + Prophyt was applied on 7- or 14- day intervals.

What does this mean for the 2020 season?

Like I mentioned earlier, this is only one year of data and I really don’t feel comfortable making recommendations based on that. Here are some suggestions moving forward though: