Find this article at:
go.ncsu.edu/readext?676172
— Written By Sara Villani 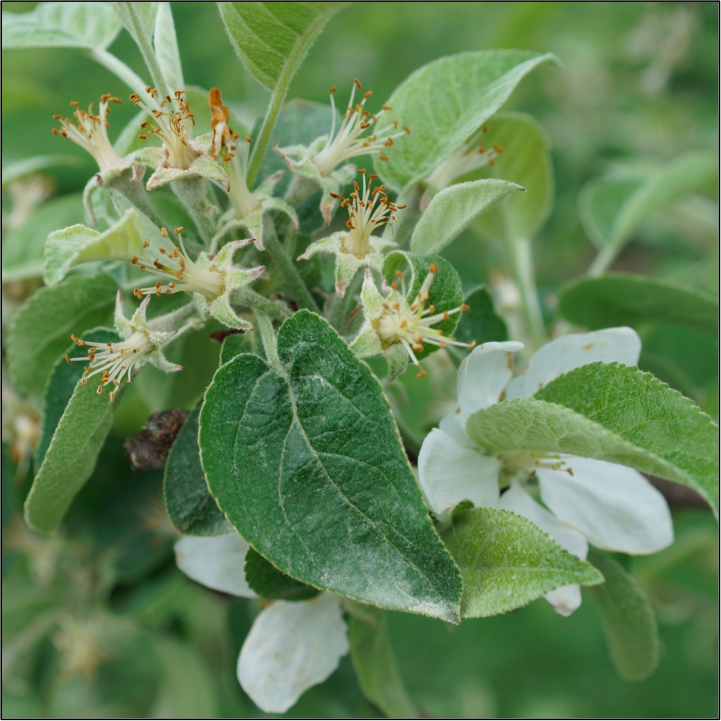 Congratulations and celebrate because primary apple scab season ended on April 12th in Western NC! However, please do not get lazy on managing this disease. The lesson of letting up on scab sprays too early was taught to myself and growers in NY back when I was working as a research technician in Kerik Cox’s program at Cornell. Like this year in NC, the primary scab season wasn’t too eventful-in NC we have had only had 7 predicted primary infection events so far in 2020. Because of this, spray intervals were extended more than normal. However, around petal fall that season in NY, rains started to come on heavy (similar to what we experienced this past weekend), releasing several spores (ascospores) with little fungicide residues remaining on the foliage. Combined with a lack of hot temperatures that summer in upstate NY, we saw several late infection events. It’s hard to believe, but even just a few missed early scab lesions can quickly lead to problems. If you hadn’t applied a single-site scab fungicide (e.g. Inspire Super, Aprovia, Flint) or you only applied a multi-site protectant chemistry (e.g. mancozeb) prior to the storms this weekend the final release of primary spores may cause you a headache down the road. Fortunately, if you continue to intensively manage scab and then follow up with normal GLS/bitter rot programs for the rest of the summer, you should be able to rest a bit easier. 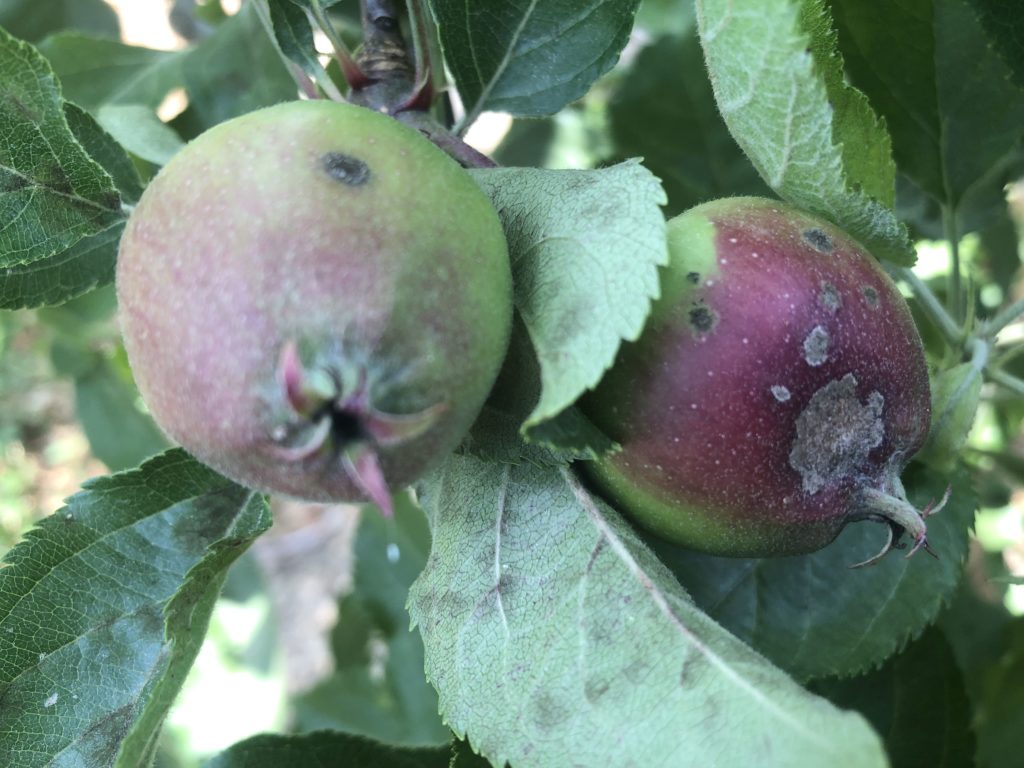 Since the weather has been relatively cool, I’m reluctant to suggest adding any GLS/bitter rot fungicides (i.e. the strobilurins) to the mix just yet. DMI fungicides (FRAC 3) such as Inspire Super, Cevya, or Indar 2F should provide good to excellent control against apple scab, will provide excellent control against cedar apple rust, and are decent against powdery mildew-all three of which your apple trees are highly susceptible to at this time of year. Another option would be application of an SDHI fungicide (FRAC 7) such as Aprovia or Miravis. Both of these fungicides perform similarly to the aforementioned DMIs for powdery mildew management, but do not provide the bang that the DMIs do for rusts. Unlike the DMIs, we’ve not yet seen resistance to Aprovia or Miravis in the apple scab fungus. However, I’d still recommend adding a half rate of mancozeb (i.e. 3 lb/A) to your tank mix. 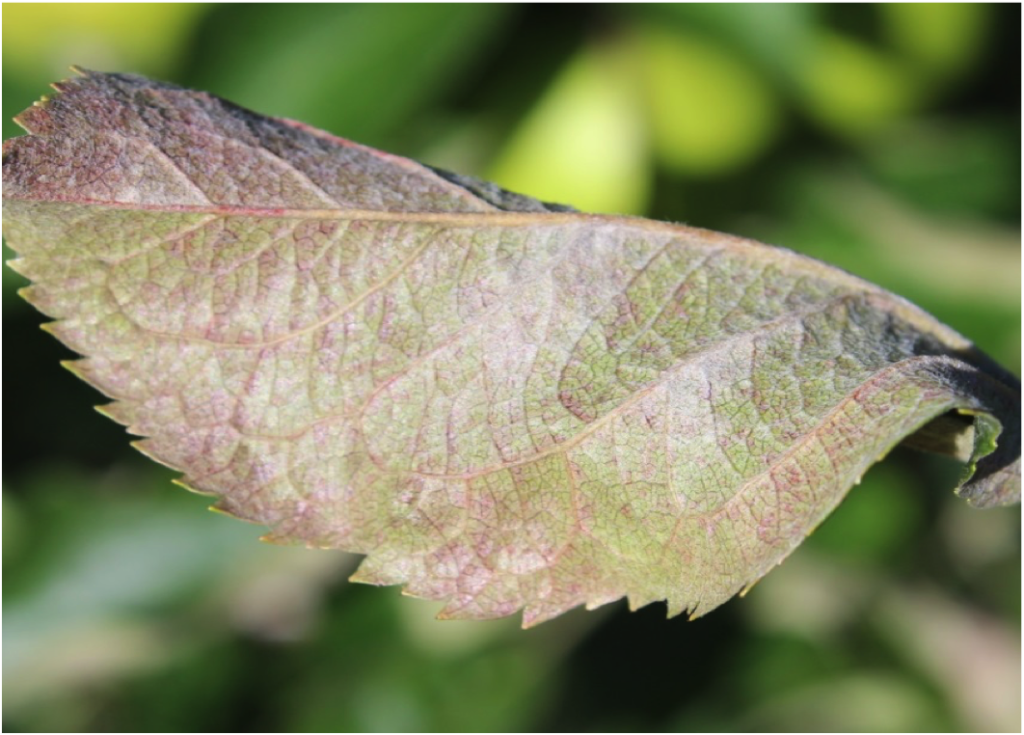 The late bloom/petal fall application represents one of the more critical timings for powdery mildew management. Protectant fungicides such as the EBDCs (e.g. mancozeb or ziram) or captan have little efficacy against this disease. Below are the results from our 2019 fungicide trial for powdery mildew management on ‘Rome Beauty’. Take note that the data is your viewing is percent control (NOT incidence)-thus the lower the number the worse the fungicide performed. Last year pressure was low in our block for powdery mildew (untreated = 27% incidence) and most treatments worked well. Five consecutive applications were made for each fungicide from pink to second cover. For most of the fungicide programs evaluated this is NOT a legal program! 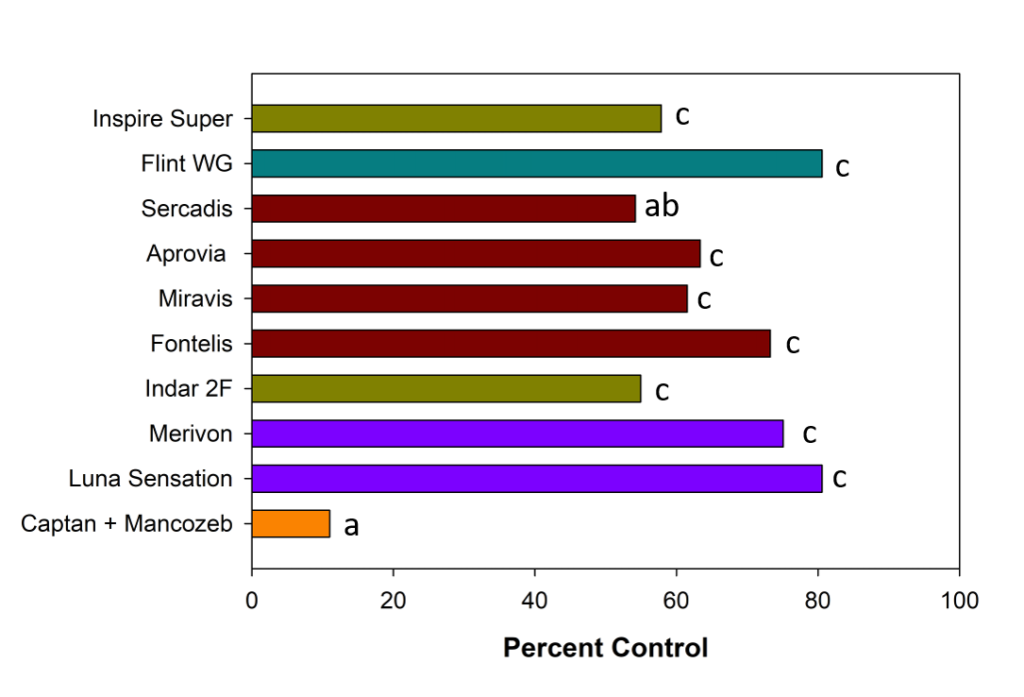 Management for the shoot blight stage of fire blight should also begin around petal fall. In order for shoot blight to occur, their must be inoculum present within or near an orchard (i.e. there must be a local inoculum source). Thus, even just a few blossom blight infections can serve as a strong catalyst for shoot blight infection. Shoot blight is the result of infection to young, emerging leaf tissue. Injury to this susceptible leaf tissue provides the means for bacteria to invade and progress down young shoots. Insects with sucking or piercing mouth parts, or other types of wounds created from environmental conditions (e.g. hail, wind, soil abrasion, etc). Application of a plant growth regulator, prohexadione calcium (marketed as Apogee or Kudos) has demonstrated the greatest efficacy against shoot blight in commercial plantings and in research trials. The chemical retards shoot growth, thereby reducing the amount of susceptible tissue available. Prohexadione calcium also thickens xylem cell walls acting as a barrier to the bacterium. At least two applications of prohexadione calcium should be applied during the season for shoot blight management. For mature trees a 6-12 oz/100 gal rate is recommended at 1-3″ of shoot growth and then 14-21 days later (considering the late season vigor in NC, I’d lean towards the 12 oz/100 gal rate). For trees less than 5 years old in which you are trying to fill the canopy, make applications at the same timings but at a reduced rate of 3-6 oz/100 gallons (again, I’d lean towards the higher rate, especially in trees 3rd leaf or older). Make sure to follow label guidelines on the addition of water softeners and penetrating adjuvant when making an application. Also, do not apply calcium in tank mixture with ProCa. If you are concerned about stunting tree growth, other (often less efficacious) options are below in the figure. 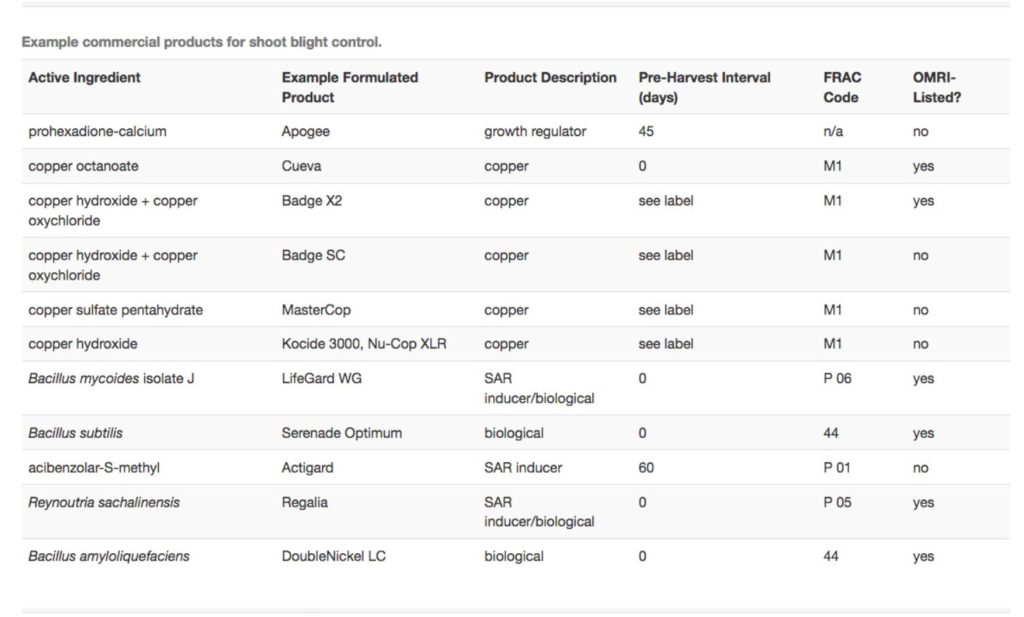