Find this article at:
go.ncsu.edu/readext?668457
— Written By Jim Walgenbach and last updated by Stephen Schoof 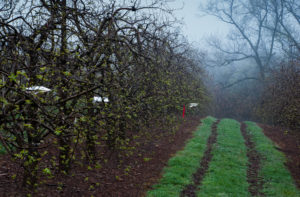 The coronavirus situation has sidelined our field activities for the timing being, so we are unable to monitor and assess pest activity in the region as we normally do. We are hopeful that we will be able to begin some field activities in the near future. Meanwhile, we do have several insect development models that are quite accurate for the timing of critical insecticide applications. What we are not able to do during this period is estimate pest density. Hence, website recommendations for the near future will be based on model predictions more so than actually captures in the field. Again, we are hopeful that can begin some field activities soon. 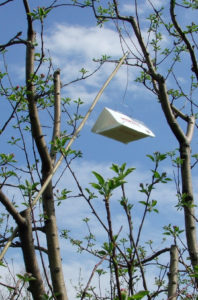 Mating Disruption:  For those using mating disruption for codling moth and oriental fruit moth (OFM), now is a good time to complete deploying dispensers. Ideally dispensers should be hung before codling moth biofix, which generally coincides with full bloom of ‘Delicious’ apples; in orchards with very low codling moth populations (i.e., where mating disruption has been used in previous years) biofix often occurs later. Also, hand-applied dispensers are much easier to deploy before trees are in full bloom or when they begin to leaf out.

OFM flight is well underway in lower elevations in the piedmont and foothill areas, and OFM are beginning to emerge in higher elevations such as Henderson County (2100 ft). Deployment of mating disruption dispensers before OFM biofix is less critical than for codling moth, because the first generation can be easily controlled with a single insecticide application at petal fall of apples (closer to shuck split or slightly later in peaches). Insecticide choices at petal fall will be covered in future posts. 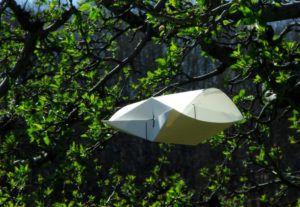 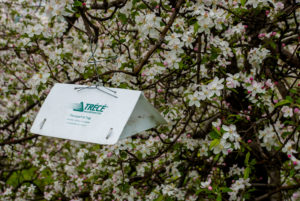 Pheromone Traps: Now is also a good time to hang pheromone traps for codling moth, and OFM if they have not yet been deployed. Both wing and Delta style traps are appropriate for codling moth and OFM, but it is our experience that Delta traps are much easier to service. Also, it is recommended that traps be placed in the upper third of the tree canopy if possible, because this is where flight activity is most common. Finally, use of the same pheromone lure we have used in our research is important if our recommendations are to be relevant to your trap captures. OFM and codling moth lures we have used in our research have been Trécé brand OFM L2 and CM L2, with the L2 indicating they are long-life lures. L2 lures are loaded with a higher dose of pheromone compared to standard lures, and only need to be changed at 12-week intervals, compared to 4-wk intervals for standard lures.

A group of scientists in the Eastern US who are collaborating on ambrosia beetle research (including the NC  Apple Team) are conducting a survey to better understand the severity of ambrosia beetles on both a spatial and economic scale. The survey is coordinated by the University of Georgia, and is being sent to producers of ornamentals, apples, peaches, and pecans. The results of the survey will be used to help set research and extension priorities, and in grant proposals to document the importance of ambrosia beetles to stakeholders.

The survey will only take 5 to 7 minutes, so please participate and Help your Apple Team Help You!