Find this article at:
go.ncsu.edu/readext?667976
— Written By Sara Villani

I thought a combined post on disease management for the pink and bloom stages was justifiable this week since for many in NC trees went from pink to 50% bloom in three days. Yes, despite the 80 deg. temps outside, it even caught the NC State University apple team by surprise. At this point, apple scab, powdery mildew, and cedar apple rust, and of course fire blight should be the main disease concerns in your orchard. 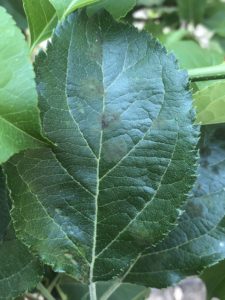 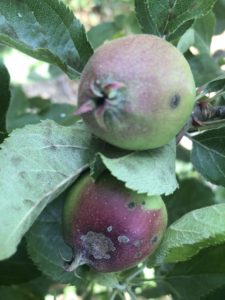 During this time and continuing through petal fall, ascospores (spores that overwintered primarily on leaf litter) will mature rapidly. Once “ripe”, these spores will be released during a rain fall. Therefore, any green tissue not protected is susceptible to infection. Given the high temperatures over the past few days, there likely was emergence new, unprotected tissue. Even if you sprayed late last week, you may want to consider a fungicide application early this week. At MHCREC in Mills River, we initiated the model when approximately 50% of the buds on ‘Gala’ reached green tip (March 13, 2020). As of March 31, ascospore maturity is at 55% and 5 infection events (1 combined) were forecasted in Henderson Cty, NC: March 16-17, March 18-19, March 21, March 24, and March 31. Keep in mind, March 31 is the date I’m posting this. If you have not gotten a fungicide on for scab, consider applying one no later than April 1 (tomorrow) with good kick-back activity. My suggestion would be a FRAC 3 such as Inspire Super, Indar 2F (high rate), or Cevya, OR a stand-alone SDHI (FRAC 7) with high intrinsic activity against scab such as Aprovia or Miravis. 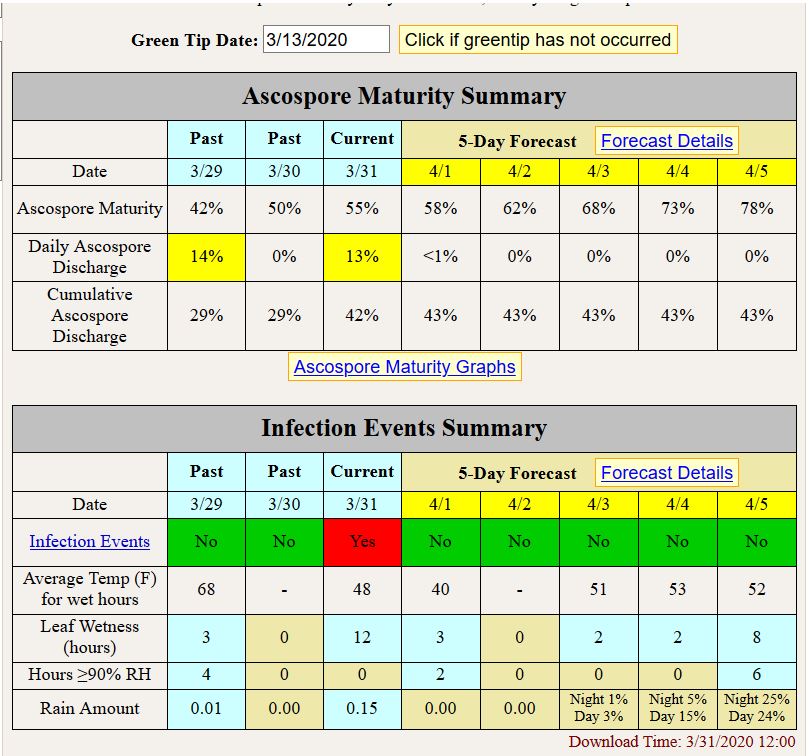 If you had a powdery mildew problem in some of your blocks last year, it very well likely could come back with a vengeance this year. Last year, my observations were that powdery mildew in the region was more severe than we have previously given it credit for, particularly in highly susceptible cultivars such as Rome Beauty, JonaGold, and Honeycrisp. My suspicions are that russetting on fruit (on some cultivars) was to some extent caused by infections during the bloom-early fruit development period. Likely the first sign/symptom of powdery mildew in your orchard will be a white-silvery colored “flag” shoot that is stunted in growth: 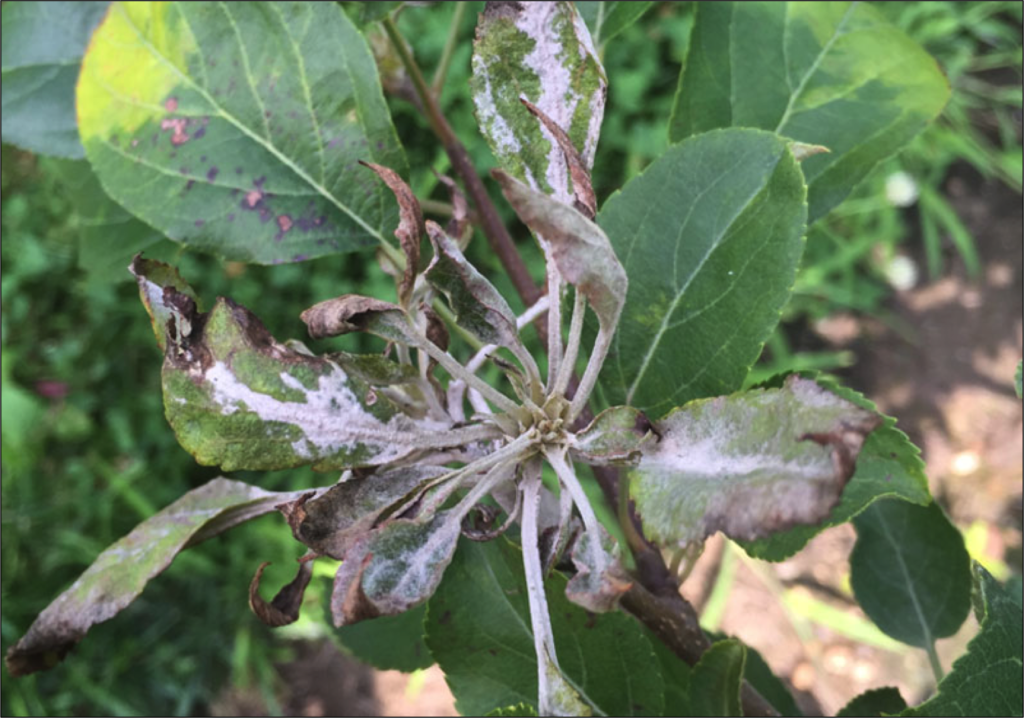 As I mentioned above, if powdery mildew was not controlled well in your orchard last year, chances are you will likely have infection this year as well-as long as it is warm, humid, and fairly dry. This is because the pathogen overwinters in buds and infects new shoots as they emerge. If you do see flag shoots, your first line of defense is to get them out the tree and out of the orchard. Multi-site protectant fungicides such as captan, mancozeb, and ziram have marginal efficacy against powdery mildew, so if you are relying on these products for scab control during this period, be sure to slip a single-site fungicide into the mix. In general, stobilurins (FRAC 11) have performed well in our trials at MHCREC, but I’m hesitant to recommend them at this time of year because of GLS and Bitter Rot concerns later on. DMIs demonstrate a range in activity against powdery mildew (some work better than others) but I’ve generally observed excellent mildew control with Rally 40WSP, Procure, and Topguard. In general, SDHIs have performed “ok” in our field trials. Miravis (Syngenta’s new SDHI, which is highly efficacious against scab) has also performed quite well in powdery mildew trials conducted in NC and NY. 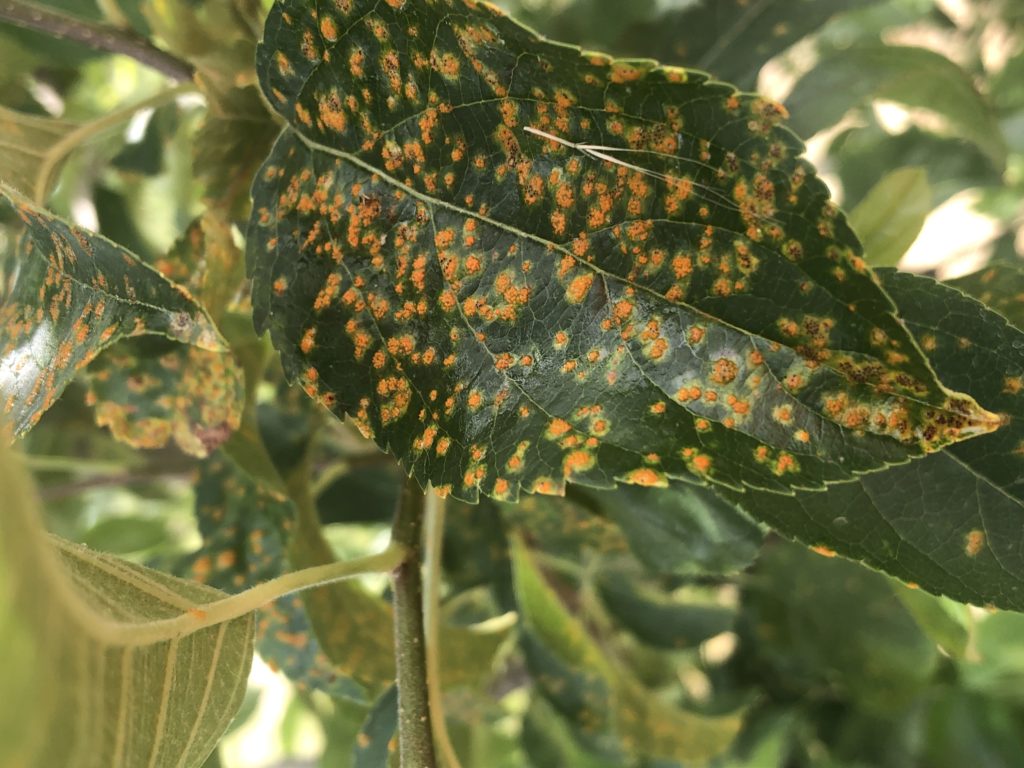 As mentioned in last week’s post, FRAC 3 (DMI fungicides) should be your go-to for rust control. You don’t need to break the bank either. Some of the older fungicides like Rally 40WSP will do a fine job against apple rusts. Other options included Topguard, Procure, Inspire Super, Cevya, and Indar 2F. 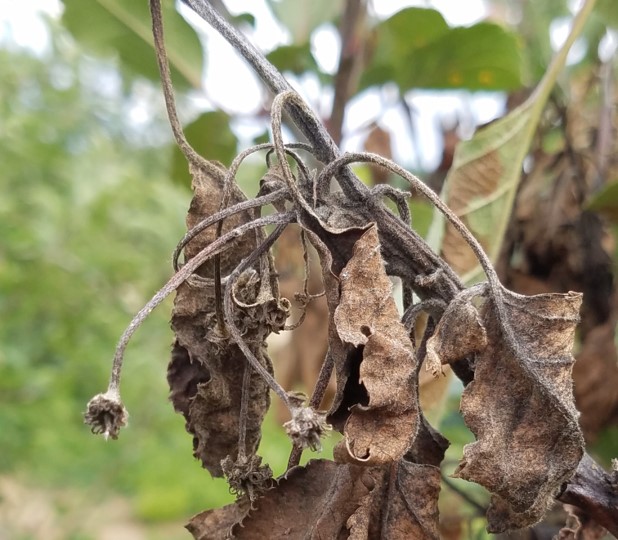 All unprotected, open, and intact blossoms are susceptible to fire blight infection. Blossom blight initiated during the spring as the pathogen, overwintering in cankers, begins to ooze and is disseminated to open flowers, primarily by rain splash or by insects. Upon arrival to an open blossom, bacterial multiplication occurs on the stigmatic surface of the flower, provided that enough heat units have accumulated to support reproduction. At this point the flower is not considered infected and the presence of the bacteria on the stigmatic surface presents an ideal time for management with bactericides. Even the infection of a few blossoms can set the stage for catastrophic losses later in the season, due to the systemic movement of the pathogen through xylem tissue.

As many of you are aware, there are a few different models that can be used to predict blossom blight infection events: i) Cougarblight; ii) MaryBlyt; and iii) the NEWA system if you have a compatible Rainwise or Onset Station on NEWA network (newa.cornell.edu). NEWA uses logic from both the Cougarblight and Maryblyt models. My plan is to put out a more in-depth post this week about fire blight models and management. If you had open blossoms anywhere in NC this weekend, you likely had a high to extreme risk for blossom blight infection. If an antibiotic spray was missed, make sure you scout for infections in the next few weeks and immediately remove to avoid secondary shoot blight infections.
share Share This Article