Find this article at:
go.ncsu.edu/readext?624971
— Written By Sara Villani 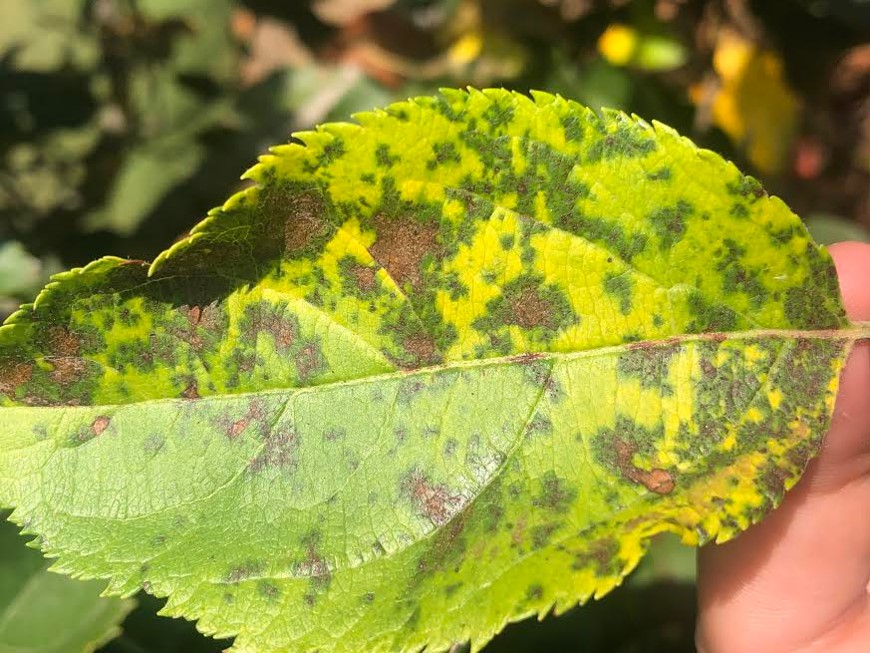 Premature defoliation resulting from Necrotic Leaf Blotch and Glomerella Leaf Spot was the focus of last week’s post. Unfortunately there’s another new beast in town-Marssonina Leaf Blotch (MLB) that can also result in significant premature defoliation on apple trees. MLB was first brought to my attention in 2018 by crop consultants and growers in Western NC who were noticing “Glomerella-like” symptoms on ‘Rome Beauty’. Colleagues of mine in NY and PA had also observed similar symptoms on different cultivars and had confirmed the presence of Marssonina Leaf Blotch, caused by the fungal pathogen Marssonina coronaria.

In NC, we’ve observed a greater host (cultivar) range of the pathogen with cultivars such as Honeycrisp, Gala, Pink Lady, several cider apple and heirloom varieties, and Rome Beauty losing leaves early due to MLB. The disease has also been identified in additional humid production regions beyond what was discovered in 2018. Symptoms in NC have also appeared earlier and are generally more severe than what we saw the previous year, so this is certainly a disease to keep on your radar.

Below are some Marssonina Leaf Blotch FAQs that I’ve received from stakeholders:

What does it look like (i.e. what are the symptoms)? Leaf spots initially appear brown to reddish color with a purple border and may be initially mistaken as frogeye leaf spot (as yours truly did). Spots are initially 5-10 mm in diameter, but tend to be more irregularly shaped.

If you have a hand lens present (or a microscope), you may be able to see small, black fungal structures on the lesions called acervuli. The acervuli contain the conidia (asexual spores) of the MLB pathogen. 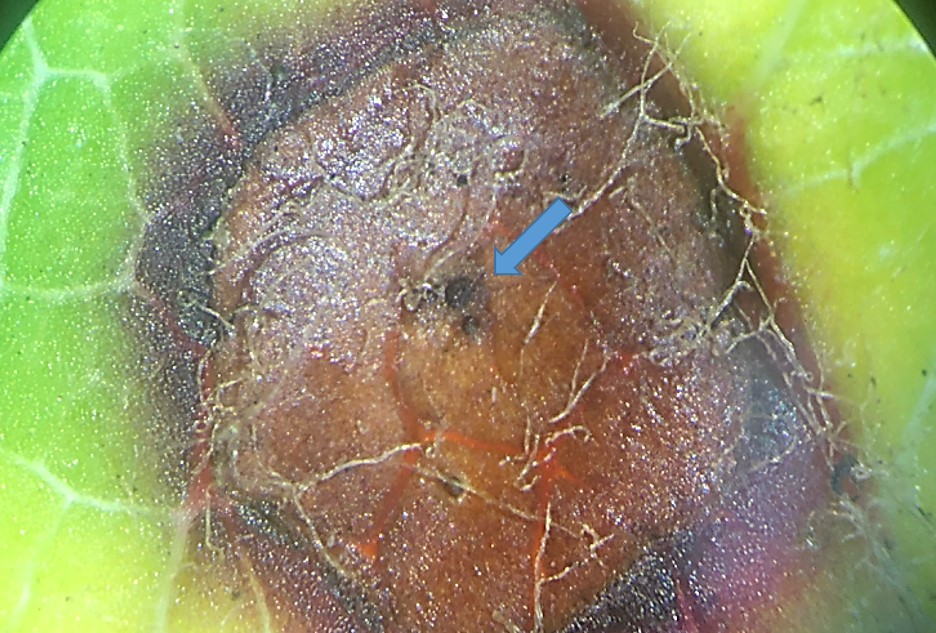 Close-up photo of an MLB lesion using a dissecting microscope. Blue arrow is pointing to acervulus.

As the disease progresses, leaf tissue surrounding the lesion will becoming chlorotic (yellow) and premature defoliation occurs as early as late June. Mycelium or thread-like structures of the fungus may also appear on older lesions. In Western NC, I’ve generally seen leaf symptoms appear in mid-July on unsprayed trees. 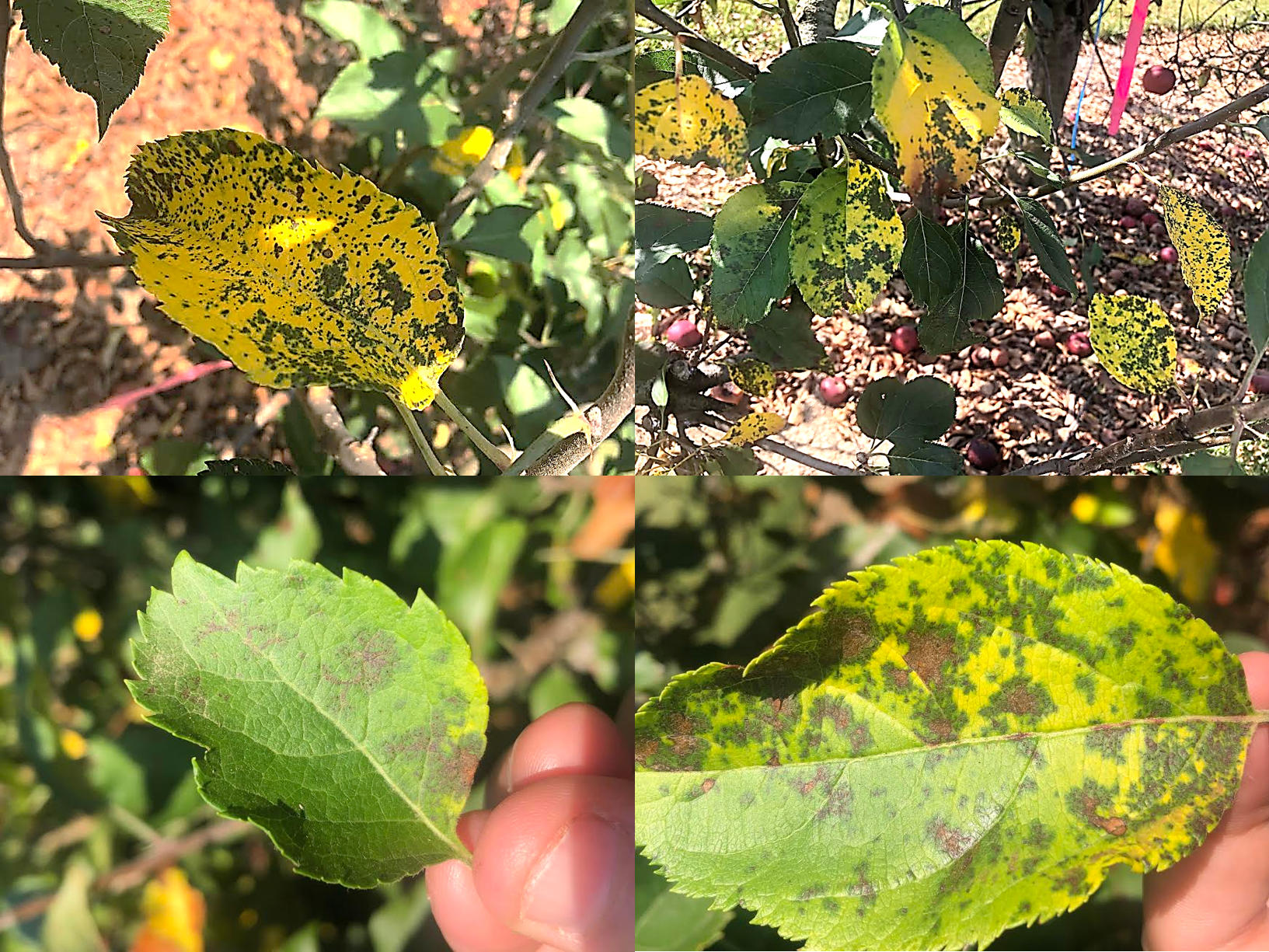 What cultivars are susceptible? According to the textbooks all of them. However in NC ‘Rome Beauty’ has been the hardest hit over the last two years. Please let me know if you are seeing symptoms on cultivars other than those mentioned above.

Can MLB cause damage to fruit?  Yes, but so far I haven’t seen any symptoms on fruit in NC, even those with severe leaf infections. Again, if you see a lesion on fruit that looks different than scab or fruit rots typical of the region please let me know!

When should we be protecting against infections? Although not yet researched in NC, studies from other apple production regions suggest that primary infection can begin as early as bloom and continue approx. 4 weeks. Secondary infections do occur and may continue throughout the season depending on weather conditions.

What should I be spraying to control MLB? Studies from China have shown that DMI (FRAC 3) fungicides are effective for MLB management, whereas other studies have identified cyprodinil (Vangard, Inspire Super), and strobilurin containing fungicides to be the most efficacious. Anecdotally captan has been also fairly effective. Similar to apple scab make sure to target the primary infection period and  regular cover sprays throughout the season. Unfortunately we did not conduct a formal fungicide trial this year. However, we did have quite a considerable amount of MLB in the ‘Rome Beauty’ research block where we conduct our scab trials and did see differences in MLB control across the early season programs. So we went ahead and rated MLB incidence (below). Keep in mind, the block only had 5 sprays: pink, bloom, petal fall, 1st cover and 2nd cover. Also, each of these fungicides were sprayed in 5 consecutive applications which for most of the programs evaluated is against label rules. However, we directly wanted to compare product efficacy at the same timing. In general, captan, DMI (FRAC 3 fungicides), Sercadis, and Merivon demonstrated high levels of efficacy against the disease. 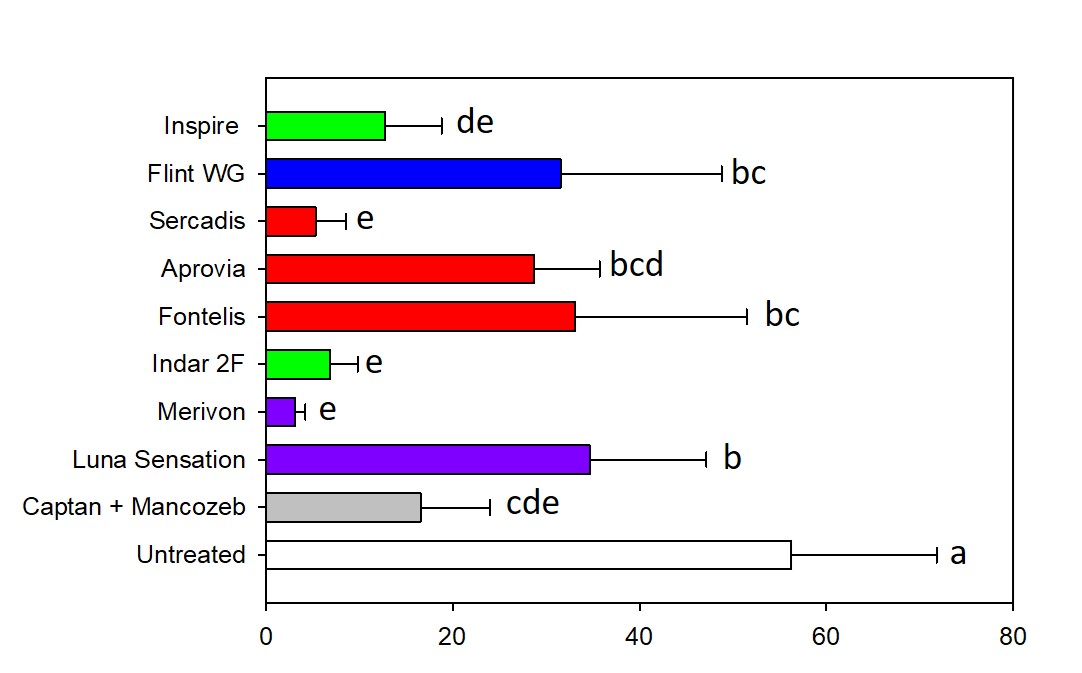 Do you have any cultural control recommendations for MLB? Since the pathogen overwinters on infected fallen leaves, my suggestion would be to follow the action plan for reducing overwintering inoculum for the apple scab pathogen: Urea, flail mowing, and/or leaf removal.