Pheromone Traps Should Be Set Up at Bloom

Find this article at:
go.ncsu.edu/readext?596309
— Written By Jim Walgenbach and last updated by Stephen Schoof

In southeastern apple production, there are four insect pests that are traditionally monitored using traps. The codling moth, oriental fruit moth, and tufted apple bud moth are all lepidopteran pests that use sex pheromones as lures in traps, while for the apple maggot (a fly) a red ball with stick’m applied and fruit essence lure is used. Apple maggot activity generally begins in late June or July, so those traps are usually erected in June. However, pheromone traps for the lepidopteran pests should hung near bloom. Below is some general trapping information for the three lepidopteran pests.

Trap Type:  The same style trap can be used for all three moths; and either a wing trap or a delta trap works well. The delta style traps are a little more expensive, but they can be used for several years and are much easier to service; the bottom sticky cards easily slide into and out of traps and are easy to replace. The bottom sticky cards for wing traps are connected to the top with a wire, which needs to be removed to service or replace bottoms. 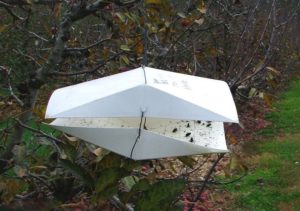 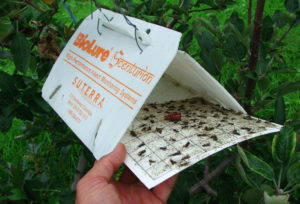 Codling Moth:  The first capture of codling moths in pheromone traps usually occurs near full bloom of ‘Delicious,’ or shortly thereafter. This first capture of moths is referred to as biofix and signifies the date when degree-day accumulations begin for the egg hatch model. A CM L2 lure (referred to as a long-life lure) is recommended, because that is what current thresholds have been based upon. CM L2 lures need to be changed only at 12-wk intervals. The traditional CM lure contains less pheromone and needs to be changed at 4-wk intervals. Ideally, traps should be placed in the top third of the tree canopy.

Recent research has estimated that a single pheromone trap is capable of capturing moths within a 50 acre area, but only one trap per 50 acres can produce variable captures. A new pattern of placing traps in orchards developed at Michigan State University – referred to as line trapping – is considered a more effective manner of monitoring codling moth. This method uses 4 to 5 traps placed only about 15 feet apart within the same row.

Oriental Fruit Moth:  First capture of OFM generally occurs near green tip, with peak captures of the overwintering generation occurring near bloom. Hence, if traps are erected now, do not be surprised if trap captures are initially high. The exception is in orchards that have used mating disruption in previous years, and where very few moths are likely to be captured. If an insecticide effective against OFM is used at petal fall in non-mating disruption orchards, that will usually control the overwintering generation, so pheromone trap monitoring becomes especially important beginning about 2nd cover, when second generation moth flight begins.

Similar to the codling moth, the recommended OFM lure is the OFM L2, a long-life lure that should be replaced at 12-wk intervals. A new enhanced OFM lure (Trece OFM Combo Lure) is highly attractive to OFM, and includes two lures that contain the pheromone and other OFM attractants. While trap capture is considerably higher than with traditional CM L2 lures, we do not yet have a good idea of how to interpret captures with these lures.

Tufted Apple Bud Moth:  The TABM has an initial emergence pattern similar to that of the codling moth, with first captures usually occurring near bloom. However, the need to monitor for TABM is questionable, because insecticides applied for codling moth for the past 15 to 20 years have dramatically reduced TABM populations. In fact, captures are so low and damage is so infrequent that it is no longer considered a key pest in this region. A single application of an insecticide recommended for TABM between mid to late May and mid-June provides excellent season-long control. Monitoring for TABM is most important in orchards with reduced insecticide use, such as those using mating disruption for OFM and codling moth.