Find this article at:
go.ncsu.edu/readext?543748
— Written By Jim Walgenbach and last updated by Brandon Hopper 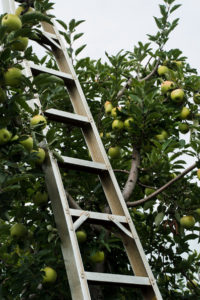 Based on pheromone trap captures in multiple apple orchards, first-generation adult brown marmorated stink bug emergence continues in the mountains, and has slowed down considerably in lower elevation orchards (less than 1000 ft elevation). Populations to date do not appear to be especially high, so two-week interval applications should be sufficient in those locations where protection is of greatest need – i.e., fresh market production.

We continue to capture apple maggot flies on traps in abandoned orchards, which is to be expected this time of the year. However, dispersal from these sites usually declines considerably later in the season, so further insecticide application specifically targeting this insect are probably not needed moving into next week, with the exception being those orchards near abandoned sites.