Find this article at:
go.ncsu.edu/readext?545204
— Written By Jim Walgenbach and last updated by Brandon Hopper 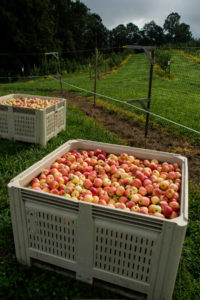 With only a few exceptions, apple insect pest pressure continues to decline in commercial orchards across the region. While some new brown marmorated stink bug adults continue to emerge, populations have been very low in the vast majority of apples, as has damage. At this point in the season it is unlikely that BMSB will suddenly increase in numbers in apples. Damage levels continue to be very low, and continued insecticide applications are probably not necessary in most orchards.

Other insect populations are also low, including codling moth and OFM. While apple maggot flies continue to be captured in abandoned orchards, the threat of dispersal to managed orchards is low at this time.