Find this article at:
go.ncsu.edu/readext?526045
— Written By Rachel Douglas

Sooty Blotch and Flyspeck are superficial diseases of apples found on the waxy apple cuticle. Sooty blotch appears as discolored gray blotches or smudges on the apple and in severe cases can cover a large portion of the apple as seen in the picture below. 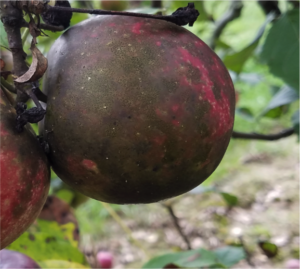 Flyspeck consists of several black dots grouped together in circular areas on the fruit. 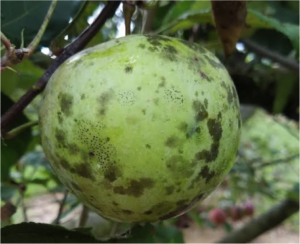 Over the years a lot of research has been done to determine ideal spray times using weather models. It has been determined that once a spore lands on the fruit surface approximately 273 hours of leaf wetness are needed before seeing noticeable symptoms. Ascospores, the primary inoculum are typically released during petal fall each year. Accumulated hours of leaf wetness are tracked beginning at petal fall to identify when to start spraying for sooty blotch and flyspeck during the summer months. The NEWA forecasting system has a model for sooty blotch and flyspeck and tracks hours of leaf wetness from the petal fall date entered by a grower. An example of the fly speck sooty blotch (fssb) model interface with NEWA is pasted below. There are only two inputs that need to be entered: Petal Fall date and Last Fungicide Application Date which have been circled in blue below. We don’t grow many McIntosh down here, so I’d suggest entering your petal fall date for an early cultivar such as Gala. You will see that the risk is LOW right now for fssb. That is because the ascopores are being released and for the most part are infecting hosts other than apple. After the initiation of fungicide sprays for the season for fssb, it’s really a residue game for keeping the disease under control. In Glomerella susceptible varieties, this shouldn’t be an issue, however, in cultivars where you may not be spraying as frequently, you may want to consider using the model. 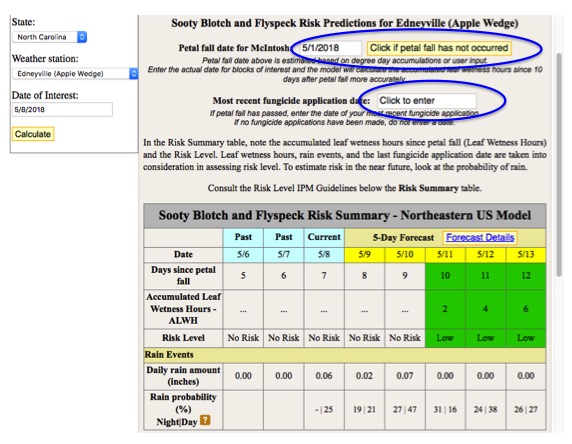 Summer sprays will need to be continued as additional spores can land on fruit surfaces from nearby hosts throughout the season. Each spore or infection event will still require 273 hours of leaf wetness before seeing symptoms which is important to remember for planning out spray programs especially as harvest approaches. As an example, say a late season spray has been applied and the residues were rinsed off due to a heavy rain event, the fruit then has to accumulate 273 hours of leaf wetness from the date the fungicide residue was rinsed off until seeing symptoms on the fruit. This is important fact to think about as final sprays are made during the season. Topsin or other products containing T-Methyl have been standards for years for controlling FSSB. For the past two years in our fungicide trials here at MHCREC, our level of control with t-methyl has been marginal and not any better than Captan + ProPhyt. We’ve seen most success for fssb control with Aprovia, Inspire Super, and strobilurins tank mixed with a protectant

More information regarding products and amounts can be found in the 2018 Integrated Orchard Management Guide for Commercial Orchards in the Southeast. In addition to spraying, it is important to allow for better air movement in the orchard to help trees dry out faster. This can be achieved through pruning practices along with mowing and keeping the weed pressure down.