Find this article at:
go.ncsu.edu/readext?706261
— Written By Jim Walgenbach and last updated by Stephen Schoof 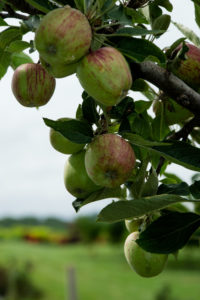 Throughout most of the higher elevation orchards (≥2000 ft), we are still in that period of low potential for insect damage. Codling moth degree-day accumulations are only at about 940 as of June 30, indicating first generation flight is complete and second generation flight is still a few weeks off. Also, OFM populations remain low in most orchards. The most common insects are secondary pests such as aphids, leafhoppers and mites, all of which can be managed with curative insecticide/miticide applications. Monitoring for these pests over the next few weeks should be conducted to determine the need for insecticides.

In lower elevation orchards, such as Lincoln and Cleveland Counties and other locations ≤1000 ft, second generation codling moth flight is just beginning. Cumulative codling moth DDs in this area are about 1400 DD, and insecticides are recommended at about 1450 DD when populations are of moderate to high density. Where populations are low – no damage by the first generation and low pheromone trap captures (no more than 1 or 2 moths per week) – insecticide applications can be delayed to 1550-1600 DD, or not applied if trap captures remain very low.

In orchards using mating disruption for codling moth and OFM, insecticides targeting second generation are rarely needed, although pheromone trap monitoring should be used to verify the absence of moths.