Find this article at:
go.ncsu.edu/readext?612284
— Written By Jim Walgenbach and last updated by Alexandra Lines 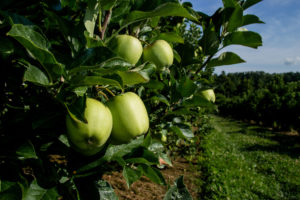 Codling Moth: In Henderson County and other locations ≥2000 ft elevation, codling moth DD accumulations are about 1700, which coincides with emergence of about 75% of second-generation adults and 35% egg hatch. For those not using mating disruption and who are not using pheromone traps to monitor coding moth, this is an important time for insecticidal control. In orchards monitoring for codling moth and where trap captures have remained low throughout this period, only one insecticide application targeting the second generation is necessary. Insecticides targeting codling moth in orchards using mating disruption are only necessary if pheromone trap captures indicate they are needed – a threshold of an average cumulative trap capture of 3 moths over a two to three week period has worked well to minimize insecticide applications without risk of injury.

In lower elevation orchards (<1000 ft evelation), second-generation codling moth flight is nearly complete. Degree-day accumulations are 2150, which coincides with >95% adult emergence and completion of almost 80% egg hatch. The need for additional insecticide sprays targeting codling moth in these orchards is very low, especially in orchards that have not yet seen damage up to this point in time.

Brown Marmorated Stink Bug: At lower elevation orchards in the piedmont, emergence of first-generation adult pheromone trap captures remains high, and this is an important time for insecticidal control of BMSB.

In mountain locations, first-generation adult emergence has not yet begun. A total of about 495 DD have accumulated since initial egg hatch in mid-May, and adult emergence is not expected to begin until about 540 DD, which will likely occur next weekend. We will continue to follow pheromone trap captures to detect first-generation emergence, but it currently appears that will be when insecticidal control may be necessary.

Other Potential Pest: There have been a few reports of woolly apple aphid infestations. Control of WAA within season is very difficult, with Diazinon 50WP being about the only product that provides reliable knockdown of this pest. However, only the 50W formulation is registered on apples, and it has a 21 day preharvest interval (PHI) and a 4-day re-entry interval (REI). In many situations the parasite Aphelinus mali reduces mid to late-season populations more quickly than insecticides. Parasitized aphids can be recognized by their black opposed to reddish color.