— Written By Jim Walgenbach and last updated by Brandon Hopper 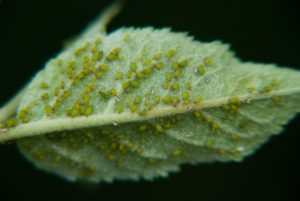 Little has changed since last week in higher elevation orchards such as Henderson County (>2000 ft). At about 1100 DD from biofix, we remain between flights of the first and second codling moth generations. In addition, oriental fruit moth populations remain low throughout the area, and first generation tufted apple bud moth flight is complete. European red mite, leafhoppers and aphids remain the key potential pests at this time.

In lower elevation orchards such as Cleveland and Lincoln Counties, second generation codling moths are beginning to emerge. Codling moth DD accumulations since biofix in Cleveland County is about 1380, and first sprays for second generation flight are recommended at 1400 to 1450, depending on codling moth pressure. In orchards with low pheromone trap captures and no damage from the first generation, a single application shortly after 1500 DD is usually sufficient.

Now is a good time to keep an eye out for Japanese beetles, especially on young trees, as high numbers of them have been noted in some locations. Most neonicotinoids will do a good job knocking down Japanese beetle numbers without flaring European red mite populations.

Brown marmorated stink bug populations remain low throughout the region. Currently, overwintered adults are declining in numbers and nymphs are in early stages of development – second or third instars.