Find this article at:
go.ncsu.edu/readext?531143
— Written By Jim Walgenbach and last updated by Brandon Hopper 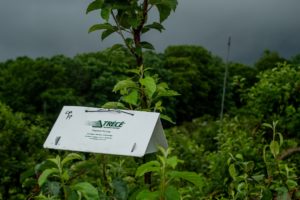 Codling moth degree day (DD) accumulations range from about 650 in Henderson County to 850 in Cleveland County, indicating that this pest remains a concern in higher elevations such as Henderson County and higher. At 850 DD, flight should be near complete in lower elevation orchards. Trap captures have been fairly low thus far, which is not unexpected considering the amount of rain we’ve experienced. Nonetheless, codling moth remains a threat in higher elevations, and if one is not using pheromone traps or does not know the population pressure in an orchard, one should make sure insecticide protection is provided for the next 10 to 14 days.

Tufted apple bud moth DD accumulations range from about 800 in Henderson County to 1200 in Cleveland County. If an insecticide effective against TABM has not been applied within the last week, one should be made at the next application. In areas off the mountain where TABM is a problem, we are nearing the end of optimum timing for TABM control. Remember that in addition to the main insecticides recommended for codling moth – Altacor (or Voliam Flexi) or Delegate – Intrepid is also highly effective against TABM.

Although second generation oriental fruit moth flight is beginning Henderson County and is underway in lower elevations, this generation is rarely a threat to apples, especially if the first generation was adequately controlled.

Finally, June is the month when scouting for key secondary pests should begin. Both European red mite and green apple aphids are prevalent during this time. There have been quite a few reports of European red mites in many orchards, which is obviously early for our location. Although there are many excellent miticides that can suppress populations, there are few that are effective knockdown products when populations are high – i.e., >10 adults per leaf. Probably the most effective knockdown material is Acramite, followed by Nealta and Portal. Agri-Mek can also work well in this capacity, but usually when applied closer to petal fall or first cover. Other products that have good residual activity and are ovicidal and sterilize adults include Zeal, Apollo and Savey. But these products will not provide knockdown control and work best when mite populations are low – no more than 1 or 2 adults per leaf.