WNC Orchard Insect Populations for May 30, 2018

Find this article at:
go.ncsu.edu/readext?530084
— Written By Jim Walgenbach and last updated by Brandon Hopper 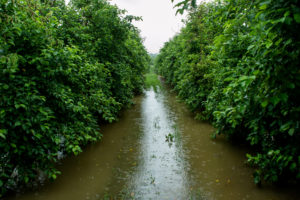 The recent heavy rain has significantly suppressed insect activity. Trap captures for most insects were fairly low this week. However, when sunshine and warm weather return, you can expect the insect world to return to normal rather quickly. So for the next week, the insects of greatest concern are codling moth and tufted apple bud moth.

Depending on location, degree-day (DD) accumulations for codling moth range from about 530 in Henderson County to almost 700 in Cleveland County. If you are uncertain of your codling moth population, you should assume that codling moth will remain a threat for the next two weeks in Henderson County. Off the mountain, populations are nearing the end of the first generation flight, and the window for first generation control will close within in the next week.

Tufted apple bud moth DD accumulations range from about 660 in Henderson County to about 870 in Cleveland County, although TABM is generally not an issue outside of Henderson County. An insecticide effective against TABM during the next week should control the first generation. Regardless of whether one is using Altacor or Delegate for first generation codling moth, both products are excellent against TABM. If codling moth control is not required at this time, other options for excellent TABM control are Intrepid and Rimon, as well as the premix products Voliam Flexi, Besiege, Cormoran, and Minecto Pro.

The Comstock mealy bug is a sporadic pest that is most common in Polk County;  rarely is it a problem in other apple producing locations in NC. In those areas where this insect has a history of infesting the calyx end of fruit, now is the time for insecticide applications targeting this pest. There are not a lot of insecticides effective against this mealy bug, the most effective being Assail (or premixes containing acetamiprid) or Movento.

Finally, European red mite continues to be observed in more orchards than usual for this time of the year. With the rains letting up, expect ERM populations to continue to build up.