WNC Orchard Insect Populations for May 22, 2018

Find this article at:
go.ncsu.edu/readext?529152
— Written By Jim Walgenbach and last updated by Brandon Hopper 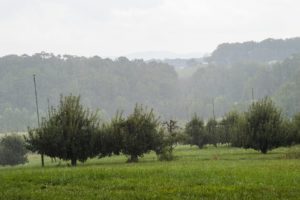 The codling moth is the major insect pest of concern at this time, in both the mountains and piedmont regions. Cumulative degree days since biofix are about 360 in Henderson County and 475 in Cleveland County. Although pheromone traps should be used to dictate the need for the number of sprays to make against the first generation, in the majority of orchards two applications should be made; ideally one now and another in 2 weeks. Only one application is needed in mating disruption orchards, and that should be timed to coincide with tufted apple bud moth during the first or second week of June.

Many of the overwintered Brown marmorated stink bug adults have emerged from overwintering sites, and emergence should be complete in the mountains in the next week or two. Emergence is likely complete off the mountain in lower elevations. We are beginning to pick up adults on pheromone traps in apple orchards, with numbers varying considerably among sample sites. Overall, traps average about 2.6 adults per trap across 27 sample sites. High populations of the overwintering generation sometimes require control, and the optimum timing of an application is the last week of May or first week of June. In those situations an application of a neonicotinoid is recommended, with Actara and Belay the best choices. For those using Voliam Flexi, that contains the active ingredients in both Altacor and Actara.

There have been some reports of European red mite already appearing in apples. This is very early, although not unprecedented. Early mite populations are probably related to the extensive use of pyrethroids last year for BMSB. While the heavy rains have probably slowed down mite buildup, it would be wise to start monitoring for ERM at this time.

Compatibility of Movento with Products Containing Spreader Stickers:  For those growers who are using preventive applications of Movento for management of San Jose scale and/or woolly apple aphid, be sure to read the label about the need for a penetrating surfactant to enhance leaf uptake of this systemic insecticide. Of equal importance is to avoid using surfactants with sticking properties or pesticide products that contain built in stickers. These types of surfactants can interfere with leaf uptake of Movento. If a product containing a sticker or an adjuvant with sticker properties must be used, do not apply Movento and spray it by itself at another time.